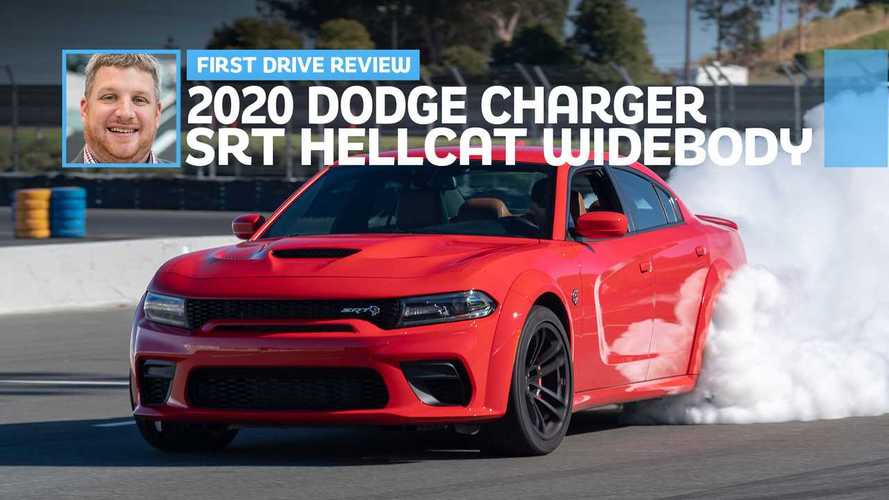 The wider Charger Hellcat makes no apologies for its muscle car bonafides.

At some point in the past ten years, the folks behind the Ford Mustang and Chevrolet Camaro got it into their heads that sports cars were somehow superior to muscle cars. Whether that's true is open to debate. But what it means for you, dear reader, is that the shifted philosophies behind the Camaro and Mustang mean the Dodge Charger and Challenger are arguably the only true muscle cars left in the market.

Dodge, to its credit, seems acutely aware of this, as it continues to double down on muscle-car style, attitude, and driving character. What started with the Hellcat spawned a Demon, and now, a bit of that car's unholy attitude has possessed the Charger in the form of the new SRT Hellcat Widebody.

This is a widespread and wholly beneficial infection. For the 2020 model year, every Dodge Charger SRT Hellcat features a Demon-inspired widebody design and benefits from a host of suspension improvements (it's optional on the Scat Pack). While it lacks much influence from the drag-focused Demon, this sedan looks more stylish and is far better through the bends than that two-door monster. After a day of driving on the street, as well as several laps around Sonoma Raceway in northern California, I'm certain this Charger, wide body be damned, is still a pure muscle car.

The 2020 Charger SRT Hellcat still has a supercharged 6.2-liter V8 producing 707 horsepower. That bit hasn't changed for this year (aside from the limited edition, 717-hp Charger Daytona). What has changed, however, is how this sedan looks.

Its ludicrously flared wheel arches stretch the car's width from 75 inches to 78.3, while the track jumps from 63.7 inches to 65.3, and the style goes from a solid 8.5 to 11. Unlike the widebody Challengers, which start life with relatively simple lines and a minimum of different, contrasting shapes, the Charger's design is less cohesive, and adding one more element – said wheel arches – doesn't help matters much. But muscle cars should have excessive styling, even (or especially) if they aren't especially attractive.

Muscle cars should have excessive styling, even (or especially) if they aren't especially attractive.

Helping the Charger SRT Hellcat Widebody complete that mission are a huge range of colors, stripe packages, and other details. The lineup of cars when I arrived at Sonoma Raceway was like a greatest hits package of muscle car memories, with Cunningham-like stripes, black hoods, and vibrant colors and combinations marking the bodies of the Chargers on display. In a world where reducing the number of possible production options means an increase in profits, Dodge’s decision to offer 12 exterior colors, five stripe packages, and a satin-black hood is an impressive commitment to style.

The cabin of the SRT Hellcat gets subtle tweaks, too, with new French stitching on the dash and door panels and real carbon-fiber accents on the center stack. Big, impressively bolstered seats remain, featuring attractive leather and soft, grippy Alcantara suede. What also remains, though, are some rather unpleasant plastics. The Charger and its Challenger sibling have never had especially rich cabin materials, and despite having top-notch interfaces – the 8.4-inch touchscreen, T-shaped shifter, and fat, flat-bottomed, leather-wrapped steering wheel are all excellent – there's always been too much cheap plastic in too many places. That doesn't change with the adoption of a wide-body exterior.

See You In Sonoma

That wide body, though, hides some impressive changes to the Charger SRT Hellcat's suspension. The heart of these improvements, and the whole reason you add righteously flared wheel arches, is to shove more rubber under the car. In this case, a set of 305/35/20 Pirelli summer tires wrap around 20-by-11-inch wheels.

The grip these tires provide is easy to overwhelm. With 707-hp on tap and the electronic nannies in full Debbie Downer mode, I still managed to break the rear loose and squeal the tires while turning into a gap in traffic. A sudden jab of the gas is all it takes, but during that process, the Charger did feel impressively poised and well mannered, despite the supercharger shrieking underhood.

At Sonoma, though, it was a different story. When forced to cope with the lateral effect of the Charger SRT Hellcat's 4,586 pounds, the wider Pirelli tires almost felt like overkill. There's a satisfying bite on turn in and a surefootedness that shines through when accelerating out of corners. While rolling, the 305s in back feel better able to cope with sudden jabs of throttle.

The Hellcat exhibits the kind of track-ready competence normally reserved for German super sedans that cost twice as much.

But this confidence-inspiring handling is down to more than just tires. Retuned three-mode Bilstein dampers work with far stiffer front springs (32 percent compared to last year's model) and larger front and rear sway bars. The front bar expands from 32 to 34 millimeters and the back one from 19 to 22. So when Dodge told the assembled media the Charger SRT Hellcat Widebody can pull 0.96 G on a skid pad, I didn’t doubt it.

At Sonoma, the Hellcat exhibits the kind of track-ready competence normally reserved for German super sedans that cost twice as much. Even on the trickiest sections of the hilly circuit, the Hellcat wows with its predictable, neutral character. Only when you start to push really hard does the chassis give into understeer. Meanwhile, good manners with the throttle mean oversteer is never a significant threat. Or perhaps I'm just too slow to make the Hellcat angry. It's probably that.

On the street, though, there's no question that even with a ham-fisted journalist at the wheel, the Hellcat is one of the quickest sedans around. Dodge cites a 3.6-second sprint to 60 mph, which isn't as quick as an all-wheel-drive Mercedes-AMG E63 S. However, given the Charger is basically half the price of the Merc, I'll make do with its four-tenths-of-a-second handicap. This is exorbitant, effortless power, the sort that incites bouts of megalomania and causes even the crunchiest of green peacers to give into the dark side. And it all comes with a banshee-like shriek.

Unsurprisingly, the Charger's 6.2-liter supercharged V8 still sounds positively raucous, offsetting the whine of the supercharger with an old-school muscle car exhaust note. It's the distilled, delicious sound of exploding fuel and oily bits moving. The Charger's sound, more than its power, is what keeps me going for the gas pedal.

If you have to move your foot to the left, though, there's a reassuring partner in the form of stout Brembo brakes, featuring six-piston-front and four-piston-rear calipers. These stoppers clamp down on 15.4-inch rotors up front. According to Dodge, the arrangement will take the Charger SRT Hellcat from 60 mph to zero in just 107 feet. I didn't exercise the brakes that aggressively, but around Sonoma – and much like the suspension improvements – there's an unshakeable sense of confidence in how the Charger performs. This is a big, heavy vehicle, but even when braking from high speed, such as on the long exit from turn six into the tight right of turn seven, the brakes are more than up to the challenge. There's a satisfying, predictable feedback through the pedal and a weight that’s easy to modulate on track.

Improvements do often carry a cost, and in the Charger SRT Hellcat's case it's an increase in the base price from $67,495 to $69,645. But while we bemoan yet another car's price increase, the reality is that there's a significant bump in performance for just a three-percent increase in price. Plus, Chargers can get even pricier. The new, limited-edition Charger Daytona 50th Anniversary Edition starts at $74,140, while the handsome TorRed example featured here carries an out-the-door price of $80,555.

That sum includes the $1,495 destination charge, $695 Alcantara upholstery, $1,595 for carbon-fiber and suede interior trim, $1,995 for the black hood, and $545 for the gunmetal brake calipers. Functional improvements include $1,595 for the Harmon Kardon audio system, $995 for the Navigation and Travel Group, and $1,995 for a sunroof. That's a fair amount of equipment, but the bulk of it is aesthetic, while the remaining interior changes are all things we'd happily live without. There is nothing wrong with grabbing an option-free SRT Hellcat.

In fact, that's what I recommend. Forget the options. The latest Charger SRT Hellcat remains an elemental muscle car, unbothered by new tech or changes in the market away from sedans (a point reinforced by the broader Charger range's curiously strong sales record). That it now handles better and looks more imposing does nothing to sway its character, which is an unapologetic source of primitive fun. There are faster sedans that look better and have sharper handling, but there isn't one that can match the give-no-effs panache of the Dodge Charger SRT Hellcat.