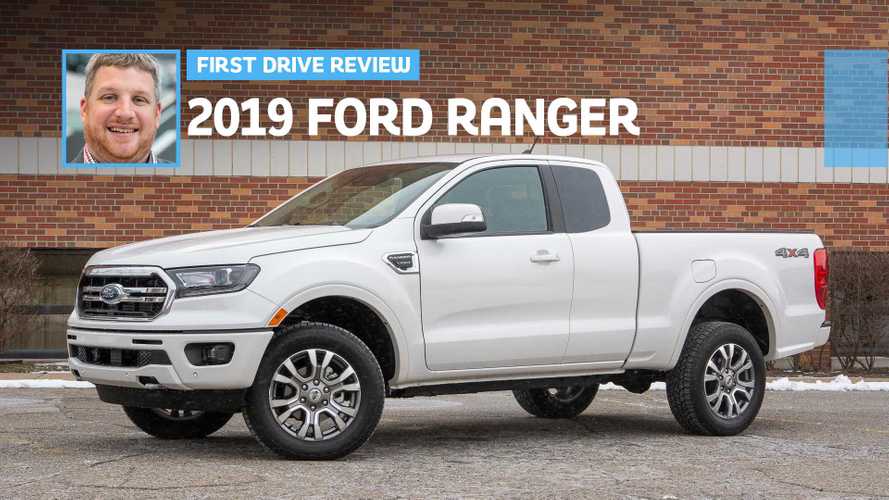 Despite its recent arrival in the U.S., the new Ford Ranger is feeling its age.

The 2019 Ford Ranger is one of the latest entries in the growing mid-size truck segment, but it hardly follows the segment’s established formula. Already in its adolescence by industry standards, the current Ranger started its life in the Asia-Pacific region in 2011 as the Ranger T6 before getting its green card and entering the U.S. market with a design that was last updated in 2015. The Ranger might be new to U.S. consumers, but its bones have been around for a minute.

And like so many other pickups, the Ranger’s price is easy to inflate. Our tester, for example, costs nearly $42,000. While that price is hardly unique to the mid-size truck segment, the Ranger’s only powertrain option – a turbocharged four-cylinder with a 10-speed automatic – stands out. Pair that with a relatively limited combination of beds and body styles (only the Jeep Gladiator has fewer body/bed configurations), and the Ranger is an oddball relative to more established competitors.

But the pieces here are intriguing, even if the whole they represent already feels aged and overpriced.

That age starts to show as soon as you walk up to the truck. The Ranger shares virtually none of its design language with the larger Ford F-150 and Super Duty trucks. Instead of brutalist edges and C-clamped headlights, the design is rounded and smooth. One could almost call it cute. Oversized taillights and a tailgate stamped with “RANGER” highlight the back end.

The style may be unexciting, but Ford nailed the Ranger’s proportions. In profile, this is an attractive truck, with the right balance between hood, cabin, and bed regardless of cab choice. Our Super Cab, with its six-foot bed, had a sporty appeal that came at the expense of usable cabin space (but more on that later).

The Ranger’s bigger problem is its disappointing interior filled with cheap plastics on the door panels, dashboard, and center stack. That’s true of the rest of the segment, sure, but the Ranger’s materials still feel below the bar set by trucks like the Toyota Tacoma and GMC Canyon, which both feature more soft-touch materials. Credit the truck’s 2011 roots for this shortcoming.

The Ranger’s front two seats are unquestionably the best places to sit in the cabin. That’s because, aside from the fact the front chairs are quite comfortable and supportive and the driver’s side bucket features an excellent position relative to the steering wheel, the twin jump-style seats in the back of the Super Cab body are largely useless. We wouldn’t even put kids in these chairs. The Ranger Super Cab is a bit like the Porsche 911, then. Although technically a four-seater, it’s realistically only a place for two.

Flip the jump seats up, though, and there’s a reasonable cargo hold in the rear of the cab that’s easy to get at thanks to the wide-opening half door. It’s far better as a place for groceries, golf clubs, or even a medium-sized cooler than it is for people, and those items will be happier in the cab than unsecured in the bed.

The Ranger’s technology suite is broadly similar to the rest of the Ford family, with a Sync 3 infotainment system working via a decently responsive touchscreen. That display spans 8.0 inches corner to corner and features nice-enough graphics. Complementing the setup are a pair of 4.2-inch displays that flank an analog speedometer.

Vehicle information like the trip computer and temperature gauges sit in the left display, while the driver can swap the right screen for information on the infotainment systems. It’s a familiar setup that’s found in Ford products dating back to the early 2010s and works well. But if you’re hopping into the Ranger hoping for new tech, the suite here serves as a reminder that while this truck is new to our market, it’s aged relative to other trucks in the segment.

The Ford Ranger is only available with a turbocharged 2.3-liter four-cylinder and a 10-speed automatic transmission. Packing 270 horsepower and 310 pound-feet of torque, the four-cylinder engine has no issue standing toe to toe with the V6 engines that power competing trucks. Although the Ranger’s 2.3-liter is down on horsepower relative to the Chevrolet Colorado’s 308-hp 3.6-liter, V6, it has a sizable torque advantage and packs 35 pound-feet more than the Chevy.

The Ranger’s abundant torque is the highlight of this powertrain, with loads of low-end power and plentiful passing grunt at highway speeds. That said, the 2.3-liter runs out of steam earlier than the Colorado’s V6. But for a potent turbocharged four-cylinder, the fall-off isn’t too severe. In fact, thanks to overall intelligence and quick shifts of the standard 10-speed auto, most drivers will rarely encounter the Ranger’s lack of punch at high speeds.

Despite its histrionics in the Mustang, the 10-speed box is a perfect companion to the 2.3-liter that powers the Ranger. It’s quick to engage from a standstill, and shifts up and down predictably. The gear changes do happen frequently under acceleration, but the Ranger doesn’t lurch and acceleration feels linear even with a Huffy’s worth of gears at work.

With the 2.3-liter and 10-speed doing their thing, every Ranger can tow up to 7,500 pounds. That’s more than any gas-powered version of the Colorado. The diesel-powered Chevy can tow more than the Ford, but its advantage is an inconsequential 100 to 200 pounds, depending on trim, body style, and drivetrain.

The Ranger’s handling and braking are merely average for the class. This truck doesn’t feel especially tossable, although, at the same time, it exhibits some of the poor manners common in body-on-frame trucks, including body shudder when the suspension fails to totally absorb bigger impacts.

The Ranger is available with Ford’s Co-Pilot 360 safety suite on every trim level, although it’s only standard on the XLT and Lariat. Co-Pilot adds blind-spot monitoring, lane-keeping assist, automatic high beams, and most importantly, automatic emergency braking. Our tester also carried the Technology package, ($795 on its own or a part of the $1,795 501A equipment group) which adds adaptive cruise control.

While the National Highway Traffic Safety Administration (NHTSA) hasn’t crashed the Ranger yet, the Insurance Institute for Highway Safety (IIHS) has. The truck earned “Good” ratings in every crash test except the small-overlap front test on the passenger side, where it scored “Acceptable.” Even without that demerit, the Ranger wouldn’t have earned a Top Safety Pick or Top Safety Pick Plus award thanks to a “Marginal” rating for its headlights. The IIHS did award a “Superior” rating – the best available – for the Ranger’s crash prevention systems.

Because of its turbocharged four-cylinder engine and 10-speed automatic transmission, the Ranger nets best-in-class fuel economy figures of 20 miles per gallon city, 24 mpg highway, and 22 mpg combined from the Environmental Protection Agency (EPA). Even better, the truck earns these figuresl while running on 87-octane fuel.

Our test model adds a number of desirable options, as well. The 501A package adds $1,795 to the tab, but includes adaptive cruise control, a 10-speaker Bang and Olufsen audio system, navigation, rain-sensing wipers, and remote start. The White Platinum paint costs $595, while a towing setup and a spray-in bedliner cost $495 each. With its $1,095 destination charge, our Ranger’s as-tested price sits at $41,610.

That’s not too bad, right?

It is if you’ve ever considered an F-150. Aside from offering a broader range of engines, body styles, and bed lengths, a well-equipped F-150 XLT costs about the same as our Ranger. Spend a few grand more and you can grab that truck’s excellent 2.7-liter EcoBoost V6. You might give up a bit of equipment moving to the bigger truck, but the capability and space afforded by the F-Series makes that a smart trade off in our eyes. That said, the Ranger’s more manageable footprint is a strong argument, especially if you need to negotiate tight quarters in your truck.