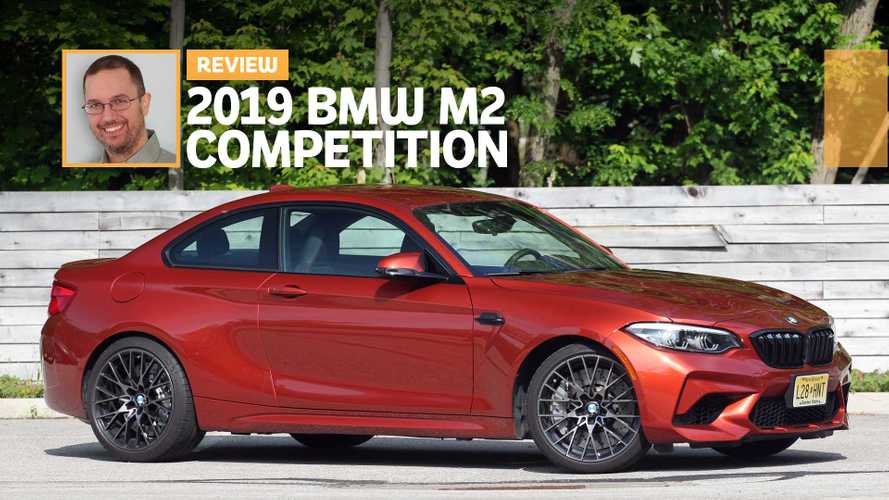 An M machine that’s singularly good at its mission in life: being fun to drive.

The BMW M2 Competition takes the more tepid 2 Series and adds extra-wide fenders for larger wheels and grippier tires, a powerful and sonorous twin-turbo engine, and a host of performance parts from the M division bin. The result is a Hulked-out, grin-inducing version of the 2 Series.

There’s another aspect of the M2 Competition we find charming: its restrained use of technology. Unlike other high-performance BMWs these days, the M2 Competition is refreshingly analog, or at least as much as a car in 2019 can be. Its lack of an adaptive suspension is due for some credit (there’s only one setting: firm), as is our car’s standard six-speed manual transmission. It’s simply a joy to drive something with a singular purpose that isn’t overly complicated, and that’s what the M2 Competition is: a joy.

Unlike designers of such competitors as the Audi TT RS and Porsche 718 Cayman, BMW's team was saddled with a more boring canvas when designing the M2; it is essentially a 2 Series coupe with a widebody kit. That’s not to say it’s ugly. In fact, its bulging fenders, quad exhausts, oversized 19-inch wheels, and add-ons from the M parts bin have turned the 2 Series into an aggressive-looking machine. The M2’s appearance is both charming and functional, even if it falls short of fetching.

The cabin, though, gets high marks all around for bringing together the best of BMW’s interior touches. The materials are all genuine: real leather, real metal, and even real carbon-fiber weave are used across the dash and on the center console. The look and layout are also typical BMW, with a long-and-low infotainment screen perched atop the dash, a tidy rotary controller on the center console, and a pair of analog gauges staring back at you. There’s a 50:50 balance of digital versus tactile in the design that makes the interior feel modern but not out of touch with the driver’s purpose.

Because the M2 is based on the 2 Series, it’s more comfortable and practical than you might expect. The 2 Series, after all, is somewhat tall for a coupe and has a usable back seat with a relatively generous trunk with 13.8 cubic feet of room. That means the M2 provides good headroom for front passengers, decent legroom for rear passengers, and enough cargo space for real-life chores like grocery shopping and mulch-schlepping. The Porsche 718 Boxster holds nearly 10 cubic feet of cargo, but you’ll have to cut anything large in half because its trunk space is split between two holds: one in the front and one in the rear.

While the M2 Competition is quite practical for a barnstorming sports coupe, its ride quality is decidedly firm. Rock hard, actually. My own beautiful spouse found this out the hard way when she almost stabbed herself in the eye with a mascara applicator while riding shotgun.

The benefit of a firm ride is sharp handling, flat cornering, and the ability to change directions like a go-kart. The downside is that we don’t all live on streets that are as smooth as a race track. Potholes, uneven pavement, and speed bumps make daily driving the M2 Competition not much fun. There is no adaptive suspension with a Comfort setting, which means the M2’s track-spec performance components, specifically its race-prepped, lightweight suspension, are always on and always unfiltered.

The M2 Competition offers substantial power from its twin-turbocharged 3.0-liter inline-six-cylinder engine. With 405 horsepower and 406 pound-feet of torque, this engine scoots all 3,655 pounds of the M2 with incredible urgency – 60 miles per hour arrives in just 4.2 seconds. A six-speed manual divvies up the thrust (a seven-speed dual-clutch automatic transmission is also available), though the marriage of this engine’s powerband and the manual’s ratios aren’t always a perfect match.

When pushing the M2 Competition hard, the engine and shifter are perfect dance partners, with shifts landing you in the meat of the powerband as long as you keep the engine’s revs up above at least 3,000 RPM. If you’re driving the M2 at anything less than 4/5ths, though, shifts can land with a clunk and a jerk. The M2’s hardware performs best at 100 percent, or at least somewhere closer to that mark than what one typically drives on public roads.

If you do find yourself someplace where the M2 Competition can be wrung out, then it’ll reward you with a purer driving experience than most of today’s electronically enhanced sports cars. That’s because its recipe is simple: put a big engine in a small car with a manual transmission, add lots of rubber, and stir. Along with a side order of BMW’s salty suspension tuning and track-level components like an active M differential, upgraded cooling system, and M Sport brakes, these ingredients make for a delicious driving experience – on a smooth road or track, at least.

The M2 Competition doesn’t flaunt its suite of tech and connectivity features like, say, a Tesla does, but they’re there. In particular, items like over-the-air updates for the navigation system’s maps, a 200-gigabyte hard drive, a head-up display, and wireless smartphone charging are all cutting edge tech options.

An 8.8-inch screen atop the dash fronts the infotainment system and runs the latest version of BMW’s iDrive. With many generations of evolution under its belt, iDrive has become one of the most user-friendly infotainment systems around, and the same is true here despite the M2 offering a less fancy rotary dial input controller and fewer buttons than BMW’s more expensive offerings.

All that said, if you’re buying the M2 Competition for the caliber of its tech and connectivity components, you’re missing the point of this car.

Neither the National Highway Traffic Safety Administration (NHTSA) nor the Insurance Institute for Highway Safety (IIHS) have crash-tested the M2 Competition. That said, it does come standard with some active driver-assist features like forward collision warning, lane-departure warning, and blind-spot monitoring. Adaptive (i.e. swiveling) LED headlights with automatic high beams are also available as part of the $1,200 Executive package, which was included on our tester.

This is a pure sports car, though, so missing entirely are items like adaptive cruise control and lane centering.

The M2 Competition may be the size of an econobox, but it guzzles gas like a pickup truck. Its official rating from the Environmental Protection Agency (EPA) is 18 miles per gallon in the city, 25 on the highway, and 20 combined. That’s worse than what its competition with four- and five-cylinder engines – the Porsche Cayman S and Audi TT RS – achieves but identical to the non-turbo, V6-powered Nissan 370Z Nismo. Of course, premium fuel is required, but that’s the case for nearly every one of the M2 Competition’s competitors.

Perhaps surprisingly, the M2 Competition is reasonably priced amongst its competition. Its base price is $58,900, it tops out at $67,120, and the out-the-door price of our tester was just $62,145. It’s rare for a BMW to offer so little optional equipment, but this M2 only has the $1,200 Executive package and a $2,500 M Driver’s package. Most everything else you want already comes standard.

Comparing the M2 Competition’s price to other two-door sport coupes reveals you’re getting a lot of horsepower for the money. While the M2 offers 404 hp, the Porsche Cayman S only has 350 hp despite its significantly higher starting price of $69,300. And while the M2 might be quite a bit more than the new Toyota GR Supra, which starts below $50,000, the Supra’s turbocharged six-cylinder engine only manages 335 hp. The Audi TT RS, meanwhile, is closest to the M2 Competition in terms of power and price, with 394 hp and a base price of $66,900.