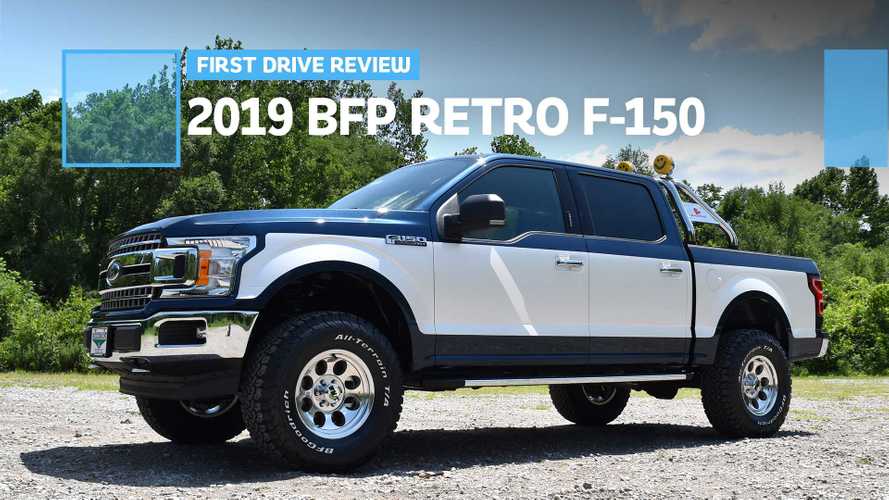 The late 1970s saw the Ford F-Series go through significant change. In 1975, Ford shuffled its truck nomenclature around, introducing the F-150 to better align its half-ton trucks with its three-quarter and one-ton siblings, while relegating the old F-100 to an entry level role in the F-Series range.

Although today’s trucks are less ostentatious than their forebears, there’s still a niche market out there for drivers that appreciate older trucks and pickup truck heritage. That’s who car dealers are catering to with retrofit packages like this BFP F-150 Retro.

We visited Beechmont Ford in suburban Cincinnati, Ohio, to check out this throwback F-150. BFP is short for Beechmont Ford Performance, and this Ford dealership is known as a go-to location for adding performance modifications to vehicles like the Mustang and F-150. Exemplary of this was an F-150 with a Whipple-equipped engine making more than 700 horsepower on its lot.

The BFP F-150 is based on a 2019 F-150 XLT painted in Blue Jeans Metallic. However, Beechmont Ford’s performance team added a white vinyl wrap to the truck that gives it a two-tone, white-and-blue combination. The satin white pearl vinyl wrap starts near the F-150’s mug and goes over the front quarter panels and wheel wells. The vinyl covering spans the entire side panel, including underneath the chrome door handles. There’s about six inches of original blue paint below and about six inches of blue above the white vinyl.

The modern grille is left unmodified and the vinyl wrap notches out around the sharp LED headlights. The tailgate is completely wrapped in white, with the Ford logo sitting atop the vinyl and the original blue paint peeking out above and below the wrap. One glimpse of the tailgate and you’re thrown as it’s clearly a new thirteenth-generation F-150, but the two-tone screams Jimmy Carter/Ronald Reagan era F-Series.

The throwback styling doesn’t stop with the two-tone wrap, however. This “vintage” truck gets Ford’s current 302A Chrome package that adds chrome accents to the front bumper (instead of painted bumpers) and also chrome on the handles, wheel caps, and rear bumper. Chrome was incredibly popular during the late 1970s and 1980s, in case you weren’t around then to notice.

Another noticeable retro look is this F-150’s tires. The special XLT has a three-inch lift but smaller wheels and tires. The Blue Jean retro F-150 wears 17-inch BF Goodrich all-terrain KO2 tires with thicker whitewalls and chrome wheel caps. This goes the opposite of today’s tire trend of larger wheels wrapped in tires with thin sidewalls.

No throwback truck would be complete without a light bar, and not just any light bar, but KC Hilites, which the BFP F-150 proudly features. This iconic brand from back in the day was found on Broncos and F-150s regularly. On this F-150, there’s even smiley face caps over the lights to complete the playful vibe. The light bar itself is chrome and manufactured by Blackhorse.

Off the back-passenger side, Roush chrome exhaust pipes turn up this F-150’s sound. This truck comes with Ford’s 5.0-liter Coyote V8 engine, the same engine found in the Mustang GT. According to Beechmont Ford’s marketing manager, Charlie Watson, it’s the engine the dealership feels best suits this retrofit as it has just the right amount of growl and power. Watson says they can put the Roush exhaust, as part of the BFP Retrofit, on any truck with any engine, including the 3.0-liter Power Stroke diesel, the 2.7-liter EcoBoost, and the 3.5-liter EcoThe 5.0-liter V8 F-150, though, with its sonorous Roush exhaust, makes 395 horsepower and 400 pound-feet of torque. While the exhaust improves the engine’s sound, it doesn’t add any power.

Towing capacity remains untouched with this retro modification. With the three-inch lift, the tongue weight is slightly diminished, but otherwise, all ratings and efficiencies are unchanged.

Inside, the F-150 feels modern, as there are no retro modifications done. That’s one of the selling points of this process. You can turn back the clock on the exterior and still maintain the comfortable and high-tech interior of today’s modern truck. This F-150 has a flip-up rear seat for extra storage. There’s also Ford’s Sync 3 system, which is Apple CarPlay and Android Auto compatible. Try finding that in a pickup from the ‘70s.

The BFP F-150 also has a nice ride. The smaller tires add to ride comfort and minimal road noise permeates the cabin, while the Roush exhaust is barely audible inside, except during strong acceleration, which is easy and fun thanks to the capable Coyote engine.

We took the BFP F-150 Retro off the beaten path and it was a confident performer. It was easy to flash back to what driving a 1970s F-150 was like, especially with that light bar overhead. And this truck definitely has an old F-Series vibe to it, both in looks but even a little in performance.

The fit and finish of this retro truck is impressive. Watson told us all modification work is done on-site. The craftsmanship is top-notch. You’d think it came off the factory floor like this. Additionally, the retrofit does not affect or void any part of the standard manufacturer’s warranty. Each facet also comes with its own warranty, including the vinyl wrap, Roush exhaust, and light bar.

Of course, this throwback movement doesn’t come cheap, as the entire retrofit can add more than $10,000 to the bottom line of an F-150 donor truck. That said, while the F-150 XLT on which this particular Retro edition is based has an MSRP of $52,350, Beechmont Ford is offering numerous rebates that take the final price to $52,695. So for a few extra hundred dollars above MSRP, you’ve got yourself a rare and custom truck you’re not likely to see in someone else’s driveway.

For the truck enthusiast with an appreciation of the past but a love for modern amenities, the BFP F-150 Retro is easy to recommend.