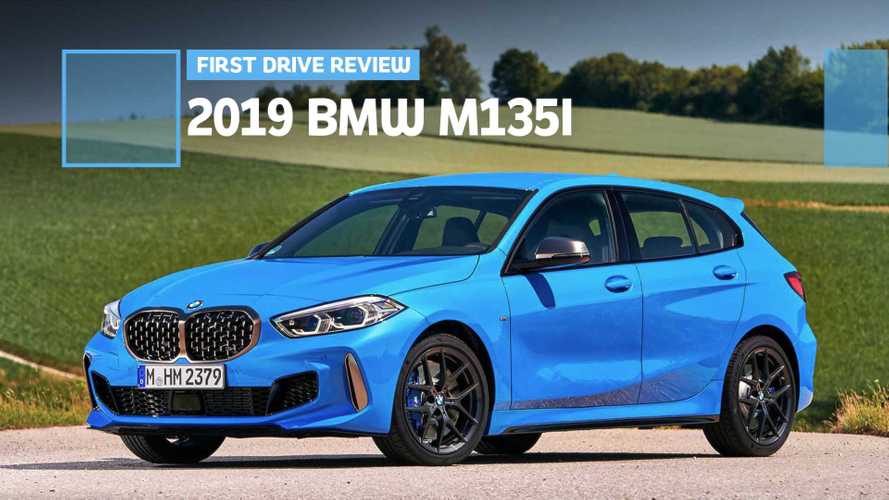 Editor’s Note: Unfortunately, the new BMW 1 Series hatchback probably isn't coming Stateside. But our German Motor1.com colleagues managed to get their hands on the hot M135i model for a test drive in Europe.

The 2019 BMW 1 Series is probably one of the most discussed and/or hated cars of the last three or four years. When BMW announced it would transition its new 1 Series to front-wheel drive, and take away its six-cylinder in the process, all hell broke loose. For BMW enthusiasts, life suddenly made less sense. The degree of horror that the new, front-drive M135i has triggered in fans is the measuring stick. However, the numbers speak a different language: the outgoing, drifting, six-cylinder F20 M140i only accounted for five percent of total sales – that's for both the rear-wheel drive and all-wheel drive variants.

But let's view this without emotion. Yes, even though it hurts knowing the last compact with a six cylinder and right-hand drive is gone, this new model (unfortunately for us) makes much more sense from a business standpoint. Given the economies of scale for such a uniform, compact platform, not even the hottest 1 Series is immune. Not to mention BMW's front-wheel drive architecture adds more space and a larger trunk without sacrificing weight.

To all the enthusiasts who feel personally attacked by the executives in Munich, you'll have to buy a coupe in the future. The two-door 2 Series will remain on a rear-wheel drive platform moving forward. Or you can accept the fact that a performance 1-Series will send power to the front wheels from now on. It won't change. Let's just hope the implementation of this new platform is successful.

Is The Switch To Front-Wheel Drive Successful?

At least BMW has done something different in this case. If you want to know what the standard front-drive setup is like, read our review of the new 118d. For the M135i, the xDrive all-wheel drive system directs up to 50 percent of power to the rear. An Aisin eight-speed automatic with paddles shifters on the steering wheel comes standard. The 135 also rolls on a specially tuned M sports suspension with a 0.4-inch drop and 10-percent tighter springs. An optional adaptive suspension with adjustable dampers is available, to which the same values apply.

The heavier M steering and M sports brake are available on the normal 1 Series, too. The mechanical Torsen lock on the front axle, though, is not. Neither are the additional body reinforcements and stiffer stabilizer bearings. The M135i comes standard with 18-inch wheels and 225/40 tires, but 19-inch wheels with 235 mm tires are available at an extra charge.

And Then There's The Engine...

It's excellent. BMW banished the previous 3.0-liter turbo-six due to lack of space. And the fact that you don't have to worry about your CO2 output any more must have been convenient for BMW engineers. Instead, the same 2.0-liter turbo from the X2 M35i – which BMW likes to praise as the most powerful series-production four-cylinder in the company's history – is the center of attention.

This engine is virtually the same as the one in the 120i. However, there's a new crankshaft, new pistons, and new connecting rods. Also, engineers reduced the compression ratio from 10.2:1 to 9.5:1, which allows for a larger turbo, and thus, more boost. Injection, intake, and cooling have also been optimized. These days, 306 horsepower isn't jaw-dropping. But the 331 pound-feet of torque is. The M135 can hit 62 miles per hour in 4.8 seconds.

These days, 306 horsepower isn't jaw-dropping. But the 331 pound-feet of torque is.

Sounds Impressive – But Does It Drive Well?

It drives differently. Very differently. That's not so much because of the new engine – though, it doesn't sound quite as delightful as the old six-banger. Now the noise is just different, somewhat more vulgar. It rumbles and roars more, with augmented sound traveling through the speakers and into the interior. When it comes to power, response, and thrust, this new 1 Series hardly needs to shy from its predecessor. It's an animal. It looks a bit coarser than the six-cylinder, but despite a 34 hp and 36 lb-ft decrease, it doesn't feel much slower. Full speed, up to the 6,500 RPM limit, and the M135i feels awake and powerful. You can definitely live with this new engine. The Aisin eight-speed box makes a good impression overall, even if it is loud and heavy in Sport mode.

As far as handling is concerned, however, larger adjustments are necessary. Even if you have fleeting memories of the old M135i or M140i, press the large reset button in your brain and prepare for something completely new. What's immediately noticeable is how ultra-agile the turning behavior is, and how flat and straightforward the new 135 (internal code: F40) ploughs through curves or reacts to sudden changes in direction. With the help of the front axle lock and specific brake interventions on the inner wheels, the M135i literally sucks you into the bend. In addition, there's a new ARB system (wheel slip limitation close to the actuator) from the i3. Here, the slip control is no longer located in the ESP, but in the engine control unit.

When it comes to power, response, and thrust, this new 1 Series hardly needs to shy from its predecessor. It's an animal.

BMW promises much faster and more sensitive control, which should lead to more traction when accelerating, especially in bends and on wet roads. In reality, the result is somewhat ambivalent. Understeering at the corner exit is a non issue, the amount of traction is abnormally high. When accelerating out, especially when the road condition leaves something to be desired, you have to deal with quite heavy tugging at the steering wheel.

The steering itself is quite stiff. But despite its immense directness, input feels more relaxed, more natural, and better than many other BMW steering systems of late. It's easy to tell you're being pulled into the bend instead of pushed as before. But the M135i's balance is still very good. It can move extremely cleanly and quickly if you want to, but it doesn't take much provocation. Compared to the Volkswagen Golf R or Mercedes-AMG A35, BMW's new hot hatch is a much wilder dog. This car drives more towards the limit like other hardcore, front-wheel-drive options like the Honda Civic Type R or Focus ST, more so than the Audi S3. And that's not a bad thing, per se – on the contrary. It just takes some getting used to.

There's nothing to complain about in terms of suspension comfort. The new 135 (here with adaptive chassis) springs tightly, but never feels unpleasantly hard. It's easy to see how much work has gone into a body that is as stiff as possible. The rolling behavior is very clean and extremely high quality.

All in all, the new M135i looks a bit better inside than before. The cockpit mimics the new 3 Series. The material quality has improved. On request, you can now have a larger infotainment screen and a digital instrument cluster, each measuring in at 10.3 inches. For the first time there's also a 9.2-inch head-up display. The optional M sport seats with an integrated headrest looks very ambitious and offers plenty of side support, but is a bit tight. Drivers and passengers over six-feet tall will experience narrow shoulder room and little headroom.

The same applies to the rear. The 135 offers more legroom, headroom, and shoulder room than before. And almost miraculously, trunk space increases by 0.7 cubic feet to 13.4 cubic feet (42.4 cubic feet with the rear seat folded down). In addition, BMW now offers practical features like a usable compartment under the actual loading floor. You can also make the backrest of the rear seat steeper, which creates an additional 1.4 cubic feet of storage space.

Should You Buy It?

BMW did what you expect of BMW. It almost seems as if the company wanted to build an overly active, extremely sporty M135i to gloss over the loss of the rear-wheel drive. With that in mind, this car is a success – even though it doesn't have the same prestige of its rear-wheel, large-displacement predecessor.

Quite honestly, the old 135 and 140 waver more and often fight with the grip. I'm almost sure that the new M135i is faster on the race track, or on a winding country road. But the old one was a charismatic hooligan, a real original, a unique specimen. The new one is excellent (despite too much tugging in the steering) and extremely entertaining. But it hardly differs from all the other offerings in this class. It has become a very competent, fast car – but that certain something is gone.