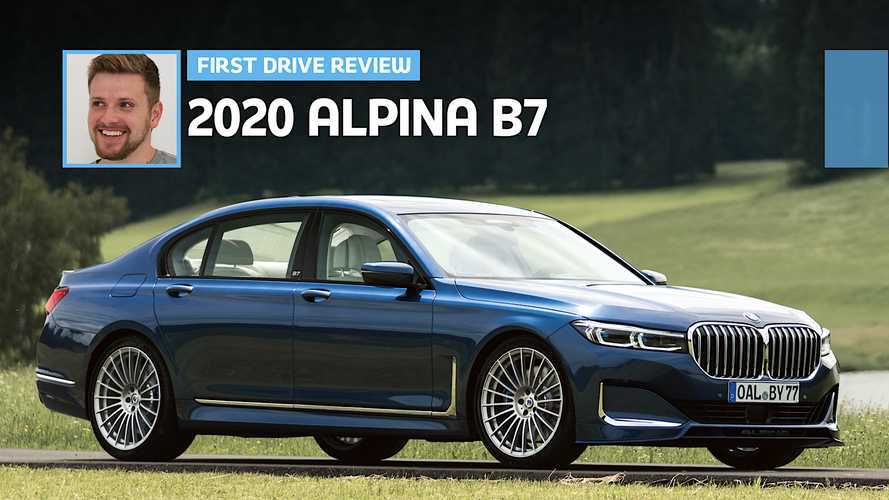 The Alpina B7 is obnoxiously posh and absurdly quick.

The Autobahn is the stuff of legend. Long stretches of unhindered German highways virtually designed for speed runs… assuming there's no traffic to deter you. But supercars don't make much sense here, given the straight, flat nature of the landscape. What you want is a fast, cushy grand tourer. What you need is an Alpina B7.

Where many full-size sedans strive for comfort almost exclusively, the Alpina B7 emphasizes performance just as well. Sure, this sedan is still high on interior luxuries, but the B7's overhauled engineering gives it more edge than the standard BMW 7 Series on which it's based. And since BMW probably won’t build an M7, that’s good news.

Alpina's upgrades to the BMW twin-turbocharged 4.4-liter V8 are significant. New intercoolers, improved intake geometry, a custom high-volume cooling system, and a raucous quad exhaust setup help generate additional force – and there's plenty of it. An earth-moving 600 horsepower and 590 pound-feet emanate from underhood and travel to all four wheels; an upgrade of 77 horsepower and 37 pound-feet over the standard 7 Series.

The additional oomph transforms the otherwise floaty four-door into a sledgehammer on wheels. Punch the throttle and the Alpina B7's 590 lb-ft strike back in full force at just 2,000 RPM. The G forces generated from all that torque drops the 4,855-pound sedan’s ass back onto its rear wheels and forces the driver's vital organs into the backrest. The specially designed Michelin performance tires (255/40 ZR20 front, 295/35 ZR20 rear) don't struggle for grip; they catch it immediately, and the sharpened ZF eight-speed automatic shifts unnoticeably through the brisk 60 mile-per-hour sprint of 3.5 seconds.

On the Autobahn, the B7 perfectly illustrates its pavement-crushing qualities. A long, straight stretch of highway invites us to test Alpina's claimed 206-mph top speed. Instead, traffic keeps the car to a cool 158 mph (255 kmh). Even at that speed, though, the Alpina B7 feels like it has much more to give. Low-end torque provides power off the line, but a steady powerband through to nearly 6,000 RPM gives the B7 a ton of grunt at high speeds.

The additional oomph transforms the otherwise floaty four-door into a sledgehammer on wheels.

Off the Autobahn, the twisty, sidewalk-sized streets of the German countryside give us a glimpse of the B7’s cornering abilities. A re-worked all-wheel-drive system that sends up to 85 percent of power to the rear wheels, a reinforced rear axle that improves stiffness, and integral active steering give the B7 some much-needed agility. Or, at least enough dexterity to pin it in a corner with some sort of confidence.

We ham-fistedly toss the B7 into a tight, uphill sweeper. The Alpina-tuned suspension attempts to fend off the forces of gravity. "Attempts" being the keyword there. The big sedan handles corners heroically and with lots of speed, but even with adaptive dampers in Sport+ mode (which drop the right height by 0.6 inches), there’s still a lot of body movement and indifference from the steering wheel. Given the B7’s core posh qualities and its stupidly quick nature in a straight line, its few flaws are forgivable. Still, the tighter steering, stiffer underbody, and adaptive dampers make a big difference over the standard 7’s floaty ride.

Merely whisper on the brakes and the four-piston fixed calipers shift just about the entire weight of the two-ton sedan back to front. It's a bit jarring, and not all that fun at first, but at least we know there's ample stopping power to pair with all that extra horsepower. Especially at 158 mph on the Autobahn.

Don't let its looks deceive you, the Alpina B7 can scoot.
Get used to seeing the back of this thing.

But elegance is the name of the game – cornering abilities are solely available as a result. And it's hard to do elegance without a cabin that's equally capable. Thankfully, most of the standard 7 Series's upscale interior elements carry over. And practically all of its safety systems, too: things like adaptive cruise control with stop-and-go, lane-centering tech, traffic-jam assist, a 3D-view camera, and even night vision assist come standard on the Alpina. Now the already well-equipped, posh cabin comes with more kit.

Alpina-exclusive Lavalina leather coats virtually every surface within reach – seats, dash, steering wheel, and doors sills included. This is seriously high-quality stuff. In fact, Rolls-Royce contracts Alpina for custom finishes in some of its vehicles. Yes, it's that good. Pair that with smooth, custom wood trim across the dash (available in either Piano or Luxury options), and a plethora of Alpina badging on the door sills, floor mats, center console, headrests, and more, and the B7's cabin is a nice place to sit.

But there is one issue. Due to airbag safety concerns (read: stuffy U.S. regulators), Alpina legally can't offer Lavalina leather in the U.S. American buyers will get BMW's perfectly fine, but not as good, factory Nappa or Merino leathers instead, and all the other Alpina trim pieces. But those in the States looking for a luscious set of seats will miss out.

On the Autobahn, the B7 perfectly illustrates its pavement-crushing qualities.

The only thing Alpina touched in terms of tech is the 12.3-inch digital gauge display. Now it wears a blue tinge, a new layout, and Alpina logos. It's inoffensive, if not totally unnoticeable. Otherwise, you get BMW's standard 10.3-inch central touchscreen, features like gesture control and a head-up display, and the regular 7’s optional Harman Kardon surround-sound system comes standard in the B7. All in all, the interior is extremely nice and tech-heavy, but like most Alpina products – it's still principally BMW.

And then there's that face. It's hard to overlook the Alpina's oversized kidney grilles, even if they are just an unfortunate consequence of the BMW with which the B7 shares its base. The pair takes up too much real estate on the front fascia, burying elements like the slim LED headlights, silver accent pieces, and Alpina lower lip and logo in the process.

But this is still an impressive-looking vehicle. Alpina's signature 20-spoke wheels (available in either 20 or 21 inches, as tested) separate the B7 visually from its factory sibling, reduce unsprung mass by 20 percent per wheel, and, honestly, look bonkers (in the best way) in both sizes. The same sharp LED light bar from the base 7 Series carries over, but Alpina tinged the rear-end with a new wordmark, smoother lower valance, and rounded quad exhaust tips that give the B7 a more elegant look.

The luscious Lavalina leather looks lovely...
...though, it's not available in the U.S.

If we had to describe the Alpina B7 in short, it'd be fast, fancy, and fun as hell. It's the speedy 7 Series that nobody really asked for – but we're entirely glad exists. Stupid quickness courtesy of an upgraded eight-cylinder engine, decent agility thanks to a heavily tuned Alpina suspension, and an upscale interior from BMW makes the B7 the perfect Bavarian all-arounder.

If you want something that can embarrass other full-sizers in a straight line, while keeping passengers absurdly comfortable in the process, this is it. Assuming you have $141,700 to spend in the U.S. (a $56,350 premium over the base 7 Series), the Alpina B7 is a swanky sledgehammer on wheels we'd be more than happy to hit the Autobahn with. Or any road, frankly.