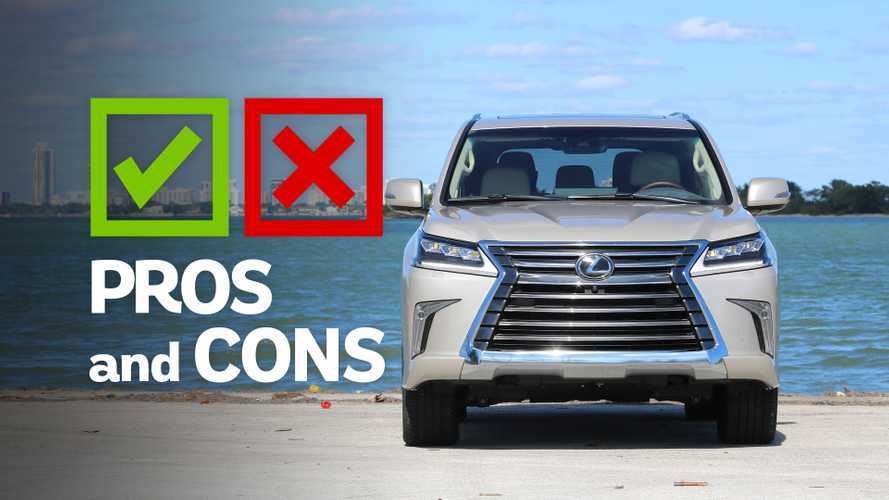 At its core, the 2019 Lexus LX 570 is little more than a Toyota Land Cruiser that went to finishing school. That’s no knock against the LX, as the Land Cruiser’s legendary build quality and off-road capabilities make it a well-loved and much sought-after SUV.

Predictably, the Lexus carries over its Toyota sibling’s best qualities but pairs them with stylish wares that reflect its more luxury-oriented mission. While the Land Cruiser’s better approach and departure angles make it the superior choice off the beaten path, the LX’s higher quality interior arguably makes it the preferred option on tarmac. And with a base price of $86,230, the more luxurious Lexus costs just $1,065 more than the Toyota. Add the Land Cruiser’s standard third-row seats to the LX, though, and the gap widens to $6,065.

In spite of its more on-road-friendly persona relative to the Land Cruiser, the LX 570 still remains a seriously capable off-road vehicle. Accompanying the body-on-frame SUV’s 8.9 inches of ground clearance is standard kit such as an adjustable electro-hydraulic suspension system, a permanent four-wheel-drive system with dedicated low-range gearing, and five different off-road driving modes: Rock, Rock and Dirt, Mogul, Loose Rock and Mud, and Sand. Additionally, the LX features Crawl Control, a sort of cruise control for low-speed off-road driving, and Turn Assist, which, in conjunction with Crawl Control, can brake the inside rear wheel to reduce the SUV’s turning radius.

Admittedly, the LX’s off-road features are overkill for driving through the urban jungle. Still, consumers who want to meander about the actual jungle in style will find only the Land Rover Range Rover and Mercedes-Benz G-Class offer a similar combination of capability and opulence. Of course, buyers will want to ditch our tester’s $785 worth of optional 21-inch wheels and all-season rubber for the standard 20-inch wheels and a set of – aftermarket – all-terrain tires.

The LX 570’s interior looks and feels the part of an SUV with an $86,230 starting price. Leather lines the seats and door panels, while every switch and button moves with a weight that imbues a feeling of quality. Gloss wood trim comes standard, however, our tester features an open-pore Walnut finish that’s available with the $1,190 Luxury package. That pack also includes items such as heated and ventilated first and second-row outboard seats, Lexus’s Climate Concierge (essentially automatic climate control that works with the likes of the heated and cooled seats to better improve driver and passenger comfort), and higher quality leather with contrast stitching. Opting for the Luxury package also requires dropping $150 on a heated steering wheel.

Further adding to our LX’s in-cabin experience are features such as a pair of 11.6-inch displays for second-row passengers as part of the $2,005 rear-seat entertainment system, a $170 cool-box below the center console armrest, and a $75 wireless charger. In conjunction with standard luxuries such as a proximity key with push-button start, a 14-way power driver’s seat and a 12-way power passenger’s seat, and a four-zone climate control system, the LX’s innards properly pampered us throughout its stay at Motor1.com’s Miami, Florida office.

Admittedly, the LX 570’s looks are of the love-it-or-hate-it type. Count your author among those who love it. While it’s far from gorgeous, the LX nicely takes on Lexus’s latest design language in such a way that it stands out from the pack while looking almost nothing like its corporate cousin, the Toyota Land Cruiser. Not every competitor in this segment can say the same (we’re looking at you Infiniti QX80 and Nissan Armada).

With its big spindle grille, aggressive headlights, and lightly finned taillamps that merge into the split tailgate, the LX is a head turner. Sure, it might occasionally turn heads for the wrong reasons, but isn’t attracting attention half the point of purchasing a full-size luxury SUV like the LX 570?

The LX 570 is heavy and it doesn’t hide it. Its steering is slow and syrupy, its brakes are touchy and overboosted, and its 5.7-liter V8 fails to move the SUV forward with the authority expected of an engine that makes 383 horsepower.

With 403 pound-feet of torque, the LX 570 makes the most of its available grunt. Passing slower moving traffic in the LX is by no means a quick affair, but thanks to its quick-shifting eight-speed automatic transmission, the SUV does pull forward predictably. Unfortunately, the LX’s 7,000-pound towing capacity is down more than 1,000 pounds to the Cadillac Escalade, Infiniti QX80, and Lincoln Navigator.

While the LX 570’s adaptive suspension offers a Sport setting, the hefty SUV’s body still leans noticeably through turns and its nose dives uncomfortably during heavy braking. Better to keep it in the cushier Comfort setting.

The LX’s infotainment system is its weakest link. A 12.3-inch screen with an in-dash navigation system comes standard. It features bright and clear graphics, however, the setup’s merits are unable to overcome the ergonomic flaw of its mouse-like, center-console-mounted controller and an aging operating system shared with countless other Toyota products. Selecting on-screen functions is both confusing and difficult to do while driving, as the driver must first look at the screen to confirm the cursor’s initial location before using the controller to move the cursor to the desired on-screen function.

A 4.2-inch digital gauge cluster screen is a relic of 2009, but at least affords access to certain infotainment features. Alas, its capabilities, as well as the information it displays, are rather limited. The screen, though, does add a digital clock for the 2019 model year.

Our tester, however, includes additional infotainment features that help make up for the system’s functional deficiencies. A $900 heads-up display screen keeps key driving information directly in the driver’s line-of-sight, while a $2,350 Mark Levinson premium audio system offers surround-sound functionality thanks to its 19 speakers – 10 more than the standard audio system offers.

The LX’s cramped third row is less comfortable than the likes of those in the Infiniti QX80 and Lincoln Navigator. The former offers 1.0 inch of extra headroom and 0.5 inch of additional legroom over the Lexus, while the latter affords 1.5 inches more headroom and a massive 7.8 inches of extra legroom. At least Lexus offers its full-size SUV with a third row; a feature that’s missing from the Land Rover Range Rover and Mercedes-Benz G-Class.

That said, the LX’s 50/50 split-folding third-row seats are unable to fold into the floor. Instead, they fold up and to the sides, which cuts into the overall width of the cargo hold. 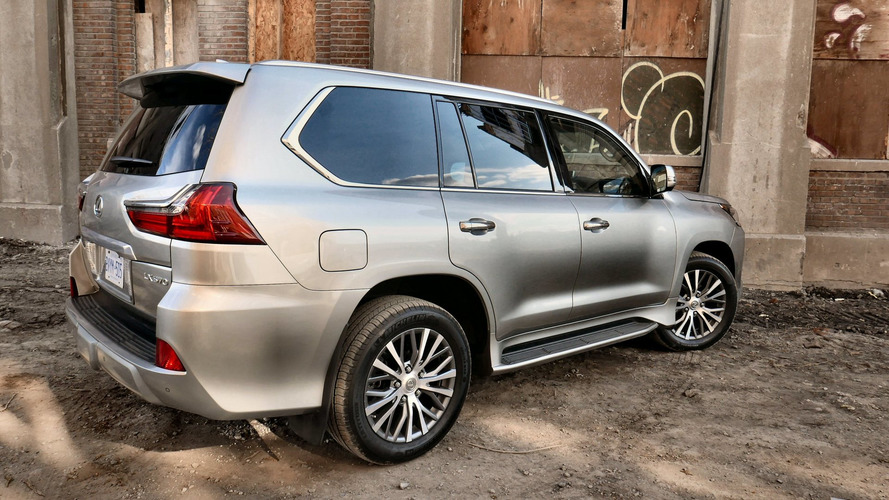