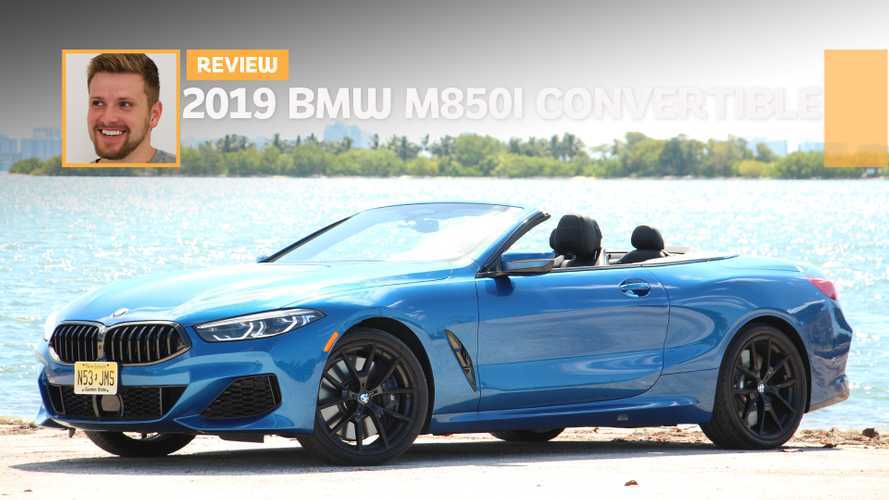 A genuine grand tourer, but no track star.

The BMW M850i Coupe seamlessly blends agility and class – and we don't doubt the M8 will do so even more impressively when it debuts in a few months. But the BMW M850i Convertible, even with virtually all of the same key ingredients, doesn’t feel as sharp as its coupe counterpart.

Instead, the droptop 8 Series takes the term “grand touring” to heart. It’s best you don’t go into it expecting a ragtop track toy. But what the M850i Convertible lacks in agility (due in part to its extra heft), it makes up for with a powerful eight-cylinder engine, gorgeous styling, and an impressive amount of tech.

At $121,400 to start, the 8 Series Convertible is in no way affordable. But consider its closest competitors, the Mercedes-Benz S-Class Convertible and the Maserati GranTurismo cost $134,300 and $150,380, respectively. Even an indirect competitor like the Porsche 911 Carrera Cabriolet costs $126,100. That makes the 8 Series the most viable option in this segment.

Even with some nickel and diming (we’re looking at you, $80 Apple CarPlay subscription), the 8 Series tested here is only $123,395 after options. The $1,700 Driver's Assistance package (radar cruise control and lane-keep assist) is the most expensive option, followed by the $900 Driving Assistance package (park assist, blind spot detection, lane departure warning), the $650 glass controls, the $400 neck warmer, and the $350 Shadowline Trim, which adds a number of dark exterior accents. We’re missing a few thousand in gear (the $3,400 Bowers and Wilkins audio, the $2,300 night vision system, and the $3,550 carbon fiber pack), but even fully loaded, the M850i should handily undercut its rivals when similarly equipped.

Even in a class stacked with some visually striking vehicles, the BMW 8 Series convertible is undeniably sexy. The long, sleek hood, sharp headlights, dramatically sloped windshield, and short rear overhang give it the perfect profile and excellent proportions with the cloth top down. The 8er is attractive with its roof up, too, although like any convertible, it still looks best with the top stowed.

The interior isn't any less impressive. Overlook the black plastic on the door panels (there’s arguably too much of it for a car that costs $120,000), and the interior – notably the dash and center console – is ultra-stylish. The 10.3-inch touchscreen is impressive looking, as is the 12.3-inch digital instrument cluster. Leather covers most of the dash and steering wheel, while aluminum fixtures find their way to the air vent covers and outline the center console.

The 8 Series gets high marks in front-seat comfort. The 20-way heated and ventilated bolstered buckets are big, cushy, and not overly bolstered. The $400 optional neck warmer – while useless in Miami – is a great option for colder climates, and the amount of legroom and headroom is adequate for a vehicle in this class.

Where the 8 Series stumbles are in the rear seats, where both headroom and passenger capacity are limited. While the front compartment is suitable for two passengers on long-distance trips, the rest of the cabin feels cramped, particularly when seated in the for-insurance-purposes-only backseats. The amount of legroom is laughable and is on par with other so-called 2+2 sports cars like the Toyota 86, while the limited headroom makes the back seats feel claustrophobic when the roof is up. There’s 12.4 cubic feet of cargo space, but BMW doesn’t mention whether that’s with the roof up or down – for comparison, the S-Class Cabriolet has just 8.8 cubes with the roof down.

Standard on the 8 Series is BMW's Live Cockpit Pro with navigation infotainment setup. It includes updated voice and gesture controls – though, the latter is still gimmicky – and the addition of an Apple Siri-like voice assistant, which is accessible via the phrase, “Hey BMW.” Here, in the new 3-Series, and in the X7, we've had few issues asking our BMW personal assistant to direct us to a local restaurant or change the radio station. Sure, sometimes it forces you to speak up or repeat phrases, but that's true of nearly all voice-operated assistants these days – and at 60 miles per hour, even with the top down, the operating system works mostly as intended.

Two large screens sit front and center: a 12.3-inch digital instrument cluster and a 10.3-inch dash-mounted touchscreen. Both screens are clear, crisp, and highly configurable. The central touchscreen responds well to inputs, but the iDrive infotainment system is arguably easier to use while driving.

The only thing saddling the 8 Series's otherwise impressive infotainment system is an issue that plagues nearly all BMW products: subscription costs for Apple CarPlay. To BMW’s credit, wireless Apple CarPlay is one of the best tech options out there, and even here it's offered with a one-year free trial. But after a year, CarPlay costs owners $80 annually – and it isn't without its own set of technical issues.

The M850i's best attribute is its twin-turbocharged 4.4-liter V8, an engine we've praised previously in SUVs like the X7. In the 8-Series, it produces 523 horsepower, 553 pound-feet of torque, and a glorious sound from the dual exhaust tips. All that power is routed through an eight-speed automatic transmission and sent to all four wheels via BMW's standard xDrive all-wheel-drive system.

The M850i is genuinely quick in a straight line, and BMW says it hits 60 miles per hour in just 3.8 seconds (0.2 second slower than the coupe). All four tires (staggered 245/35R20 fronts and 275/30R20 rears) grip the pavement like glue. There's no wheelspin and no turbo lag – the immediate torque forces you into the back of the seat while the ZF-supplied gearbox shifts quickly, and almost unnoticeably, through its gears.

Straight-line speed comes second only to the 8's cruising abilities, though. The M850i takes its GT designation seriously, and it proves supremely comfortable at highway speeds, and quiet and refined in the city. Not even the larger 20-inch M wheels hamper its ride quality.

But cornering is what keeps the 8 Series Convertible out of the sports car conversation. With active steering and an M Sport differential (both standard on the M850i), the 8 Series sounds promising on paper. But toss it into a corner and everything feels numb, even though the rear-wheel-steering system promises lightning-quick turn-in. There's little feedback from the steering wheel, too. We blame the overabundance of electronic aids. Even the adaptive suspension isn't responsive enough. Instead, it’s just overly harsh. And the 8er’s hefty 4,600-pound curb weight doesn't help with agility, either.

The $900 Driving Assistance package gives the 8 Series features like active park assist, blind spot monitoring, forward collision warning with automatic front braking, lane departure warning, and a surround-view camera. Outside of automatic emergency braking, which, thankfully, we didn't have to test, all of this optional safety equipment works seamlessly.

The $1,700 Driver's Assistance package, meanwhile, adds an entire suite of active safety equipment. We welcome the adaptive cruise control and proactive lane centering as part of the package, but they aren't up to snuff with better, more competitive systems like Nissan's ProPilot or Cadillac's Supercruise. The 8 Series ping-pongs between lane markers pretty aggressively.

That’d be more acceptable if the systems weren’t so pricey – the two active safety packages add a total of $2,600 to the price tag. Without them, though, the 8 Series is scarce on safety equipment.

At an EPA-estimated 17 miles per gallon in the city, 26 on the highway, and 20 combined, the 8 Series convertible won't win any awards for its fuel efficiency. That said, it's not bad for a sporty convertible with a big V8. It bests than the Maserati Gran Turismo's ancient 4.7-liter V8 (13/20/17) and matches the S-Class Convertible (17/26/20). But don't forget, all three vehicles require premium fuel.