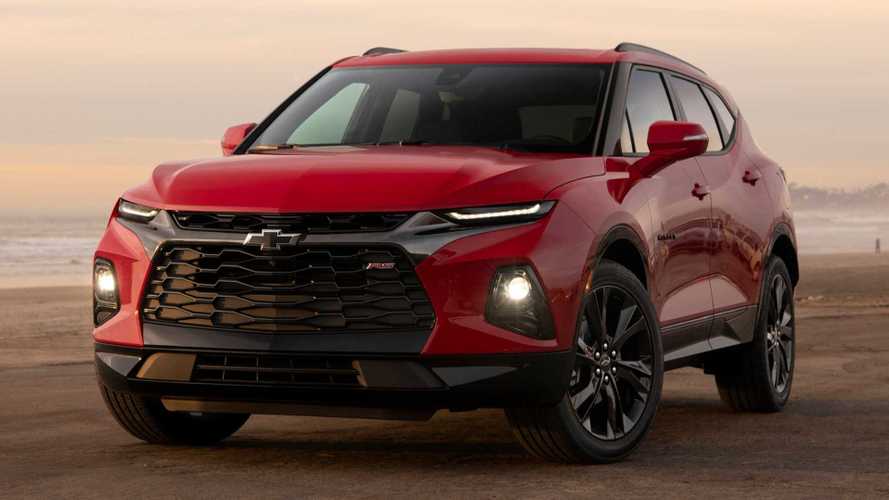 Camaro-inspired styling helps this mid-size crossover stand out from the pack.

Forget everything you think you know about the Chevrolet Blazer, because the 2019 model is as different from its namesake as modern-day humans are to Neanderthals. No longer a traditional SUV, the 2019 Blazer trades its predecessors’ body-on-frame construction for car-like unibody bones. Yes, the new Blazer is a crossover, and, much to the chagrin of the model’s long-time fans, it unabashedly favors on-road competence over off-road prowess.

The latest Chevy crossover makes no attempt to allude to its historically rough-and-tumble nature, either. This is a Blazer in name only, and the new model’s slinky sheet metal stands in sharp contrast to the upright and blocky SUV-inspired designs of Blazer’s past, as well as competitors such as the Honda Passport and Hyundai Santa Fe. Save for the shapely Nissan Murano, no other mainstream mid-size crossover pushes the boundaries of exterior design as far as the Blazer does.

Bulging front and rear fenders, a low-slung roofline, and a brash, Camaro-like mug give the bow-tie-badged crossover a distinct look in an often utilitarian segment. The Blazer’s sultry style comes at the cost of cargo capacity, and the Chevy’s cargo bay is among the smallest in the mid-size crossover class. With 30.5 cubic feet of space with all seats in place and 64.2 cubes with the rear bench folded, the Blazer is down more than 10 cubes to the Passport, which provides 41.2 and 77.9 cubic feet of space, respectively.

Like the exterior, the Blazer’s interior pulls styling cues from the Camaro’s insides. It’s an odd design decision considering the cabin of the muscle car is one of its least redeeming qualities. Predictably, the Blazer’s interior suffers from many of the same faults as the Camaro, including chintzy plastics on the lower dash and door panels, low-mounted center air vents that do a better job of cooling knees than torsos, and climate controls that are small and difficult to decipher at a glance.

How about an extra row?

The Blazer’s innards aren’t without merit, and the standard 8.0-inch touchscreen infotainment system with Apple CarPlay and Android Auto is among the best in the business. Clear graphics, quick response times, and logical menu structures afford a generally user-friendly setup. Higher-end RS and Premier models benefit from a standard in-dash navigation system, six USB ports, and a large 8.0-inch digital gauge cluster screen that mirrors many of the center screen’s functions. Lower-level L and LT trims make do with four USB ports (adding navigation bumps the count up to six) and a smaller 4.2-inch gauge cluster screen.

The Blazer’s innards aren’t without merit, and the standard 8.0-inch touchscreen infotainment system with Apple CarPlay and Android Auto is among the best in the business.

Although a 193-horsepower 2.5-liter four-cylinder engine serves as the Blazer’s entry-level engine, moving up to the higher-spec RS and Premier trims replace the four-pot with a more powerful 308-hp 3.6-liter V6 (the six-cylinder is available as an option in the LT). A nine-speed automatic is standard across the board, while all-wheel drive is a V6-only affair (front-wheel drive comes standard with either engine).

In spite of its aggressive looks, the Mexican-made Blazer lacks the behind-the-wheel engagement needed to cash the check its exterior styling writes. Even the racy Blazer RS with its trim-specific damping, quicker steering ratio (15.1:1 compared to 16.1:1), and trick torque-vectoring rear axle (part of the $2,900 all-wheel-drive system of RS and Premier trims) feels overwhelmed on snaking stretches of tarmac.

Still, the mechanical changes made to the RS arguably make it the best Blazer of the bunch, as its retuned damping prevents the crossover from feeling floaty without being overly stiff, while the quicker steering setup’s heavier weighting and minuscule on-center void improve driver confidence during more aggressive drives. Additionally, the extra grunt of the six-cylinder engine, as well as the generally quick responses of the nine-speed gearbox, help the two-ton-plus crossover move with reasonable gusto.

That said, the Blazer RS is a better suburban commuter and highway cruiser than backroad burner, as its all-season rubber, mushy brake pedal, muted responses, and the lack of paddle shifters (an awkward rocker switch on the gearshift lever allows for some manual control of the transmission) sap away any sense of fun.

For most mid-size crossover consumers, the Blazer’s limited driver involvement won’t matter one bit, though. The price, however, might. With a starting sum of $28,800, the base, front-wheel-drive Blazer L costs $3,300 and $2,455 more than the entry-level, four-cylinder Hyundai Santa Fe SE and Subaru Outback 2.5i (the latter of which comes standard with all-wheel-drive). Meanwhile, the six-cylinder Blazer LT raises the base price to $33,300, or $2,030 and $1,310 more than the similarly powerful, V6-only Nissan Murano S and Honda Passport Sport.

Stepping up to the sporty RS requires shelling out $40,600, and that’s before adding all-wheel drive. While the RS comes equipped with kit such as a proximity key, leather seats, heated and power front seats, a heated steering wheel, and a blind-spot monitor with rear cross-traffic alert, adding features such as a memory seat, a wireless charging pad, heated rear seats, ventilated front seats, adaptive cruise control, automatic front braking, automatic high-beam headlights, lane-keeping assist, and a 360-degree camera requires spending $3,575, as Chevy bundles these items together as part of the Driver Confidence II package. Same goes for the panoramic sunroof that’s only available with 21-inch wheels and tires (20s are standard on the RS) as part of the $2,495 Sun and Wheels package. Factor in the $1,195 destination fee, and you’re looking at a Blazer with a $50,765 price tag, or $6,040 and $4,590 more than the price (including destination) of the all-wheel-drive Honda Passport Elite and Nissan Murano Platinum. Rubbing salt in the Blazer's wound is the fact that both the high-end Honda and Nissan come standard with many of the features Chevy charges extra for.

Much as the success of our early ancestors helped bring on the extinction of the Neanderthals, the triumph of the crossover is leading to the loss of the SUV. The Blazer is back, but the Blazer we knew and loved left us long ago.