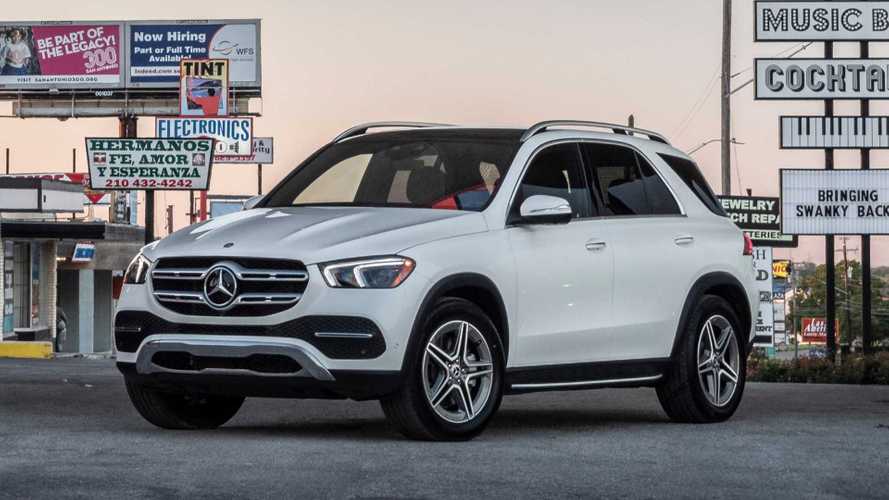 This new Benz is brighter than your honor roll student.

Cars are getting smarter, as noted by the plethora of advanced safety systems and futuristic infotainment displays you can get on vehicles as lowly as the Honda Civic. But the 2020 Mercedes-Benz GLE-Class isn’t just smart – it put in late nights at the library, read up on advanced theory, and wiped the floor with its dissertation. It’s the Einstein of SUVs.

Style-wise, the outgoing GLE’s refined, sharp proportions are swapped with a much softer tone. The grille is larger, the Mercedes tri-star logo is still located front and center, and depending on the trim, the GLE’s maw wears either a single, central chrome bar or a pair of them.

The body itself is stouter than the previous model – wider by half an inch and longer by four inches – and more rugged, too. The base model wears plastic fenders that give it a more robust appearance, perfect for soft-roading. It’s a fine-looking SUV, but a little too safe. At least the outgoing model had some sharp angles to offset its more generic design elements.

Bland is not a word you would associate with the GLE’s cabin, though. It’s just the second Merc in the States (after the A-Class sedan) to adopt the advanced MBUX infotainment system. And we welcome the changeover. The new 12.3-inch screens are beautiful. The graphics are crisp and clean, and the layout itself is hugely improved. We don’t miss the dial controller in the slightest, either. The streamlined touchpad is a big upgrade. But really, you don’t even need to be hands-on.

The “Virtual Assistant” voice control function is MBUX’s biggest talking point (pun intended). It’s like Amazon Alexa or Siri for your car. Whisper the phrase, “Hey, Mercedes,” and it comes to life – no yelling or robot speak for the highly advanced system to understand you. Ask the system to “turn the passenger temp to 70 degrees,” or “change the radio station to Watercolors,” and the virtual assistant executes the command flawlessly.

We couldn’t help but feel that the Mercedes virtual assistant listens too closely, though. It’s the same issue we discussed in our A-Class review – at times, the voice control system kicks on with just an utterance of the word “Mercedes,” or even something vaguely similar like “season.” Thankfully, it’s easy to shut off.

On the surface, augmented reality navigation is another futuristic feature of MBUX; a live shot of forward traffic mixed with augmented graphics provide turn by turn direction and even house numbers. The only thing it doesn’t show you is when Pokemon are nearby (is Pokemon Go still a thing?). In certain situations, particularly highways and long stretches of road, it’s wholly reliable, guiding you where you need to be. But in certain situations, particularly tight city streets, it becomes distracting. Staring at the navigation touchscreen instead of the road sets a dangerous precedent.

The E-Active setup itself is pretty convoluted: Instead of conventional anti-roll bars, the GLE pairs electronically adjustable dampers with air springs and a 48-volt electrical system. The advanced setup also ditches traditional roll bars, which means each wheel can move independently of each other. Combined, the trio counteracts body roll rather than just attempting to mitigate it. It makes for an ultra comfy ride even on the roughest roads. In action (using one of the many buttons and toggles located on the center console), it looks something like this:

Sure, it looks silly. But the E-Active suspension isn’t just kitschy fodder for Instagram videos – it really is groundbreaking stuff. A “Curve” function uses cameras to read the road and dictates the vehicle’s movements based on the, well, curvature, of the street and the movement of the steering wheel. The GLE actually leans into corners (it body angle by up to three percent), as a motorcyclist would.

And for the three owners that will be off-roading their $70,000 luxury crossover, the GLE can take on the tough stuff with a “Rocking Mode” that – as the name suggests – rocks the car up and down. The GLE can essentially “jump” itself out of a tough situation, whether it be sand or mud, until gaining traction. Not even a Jeep Wrangler can do that.

The GLE 450 borrows the same nine-speed automatic transmission and inline-six engine with EQ Boost from the CLS (the GLE 350 uses a smaller turbocharged inline-four engine sans EQ Boost). Once again, the powertrain is unflappably good. Frankly, Mercedes engineers could shove the mild-hybrid inline-six into a cardboard box and we’d happily drive it.

The instant, smooth delivery, even with the GLE’s mammoth body atop, puts other hybrid setups to shame. It’s never once harsh or clunky – not even in Sport+ mode – there’s just smooth, linear power delivery whenever you need it. Even in Eco mode – which dulls down throttle response – you don’t need to forcibly stab at the gas pedal. The SUV can still scoot with just a little pressure.

Steering is light yet responsive in most settings, but a bit tighter in Sport and Sport+ modes. As big as this Benz is, it handles like a much smaller SUV. But even then, there still isn’t much feedback from the road, and the GLE’s movements are generally vague. It acts like something that would rather drive itself, and that’s fine. The safety systems on it are wholly advanced, anyway.

An updated version of Mercedes Intelligent Drive comes standard on both trims. It proves, once again, that Mercedes is a leader in developing semi-autonomous tech. The GLE even takes on tight corners thoughtlessly, slowing and applying gas as naturally as a driver would.

With navigation on, the GLE can detect stop signs, reducing vehicle speed (but not bringing it to a full stop). Adaptive cruise control brings the car to a complete stop in traffic situations, and the lane-centering technology keeps the GLE perfectly centered between lane lines. Outside of a few overly ambitious systems – like blind-spot assist, which occasionally shoves the car too aggressively away from the shoulder – Intelligent Drive lives up to its namesake.

Because the GLE essentially drives itself, you can bask in the comfort of its posh cabin. Mercedes engineers went to extreme lengths to assure those seated in the front and back of the crossover are properly pampered. The front seats are fully adjustable – everything from seat-cushion length to height and angle. Backrest angle is adjustable, as well, and its complemented by both a four-way power lumbar support and power operation for the headrest’s height. It’s almost impossible not to be comfortable in the big, leather buckets – and the additional space helps, too.

Front headroom is improved by 0.6 inches and front shoulder room by nearly a full inch. There are heated armrests, a heated center console, and an energizing massage feature that boost comfortability. The back seat is more spacious, too – it gets an increase in headroom by 1.4 inches and legroom by 2.5 inches. It’s a very nice place to be.

Mercedes-Benz marries attention to detail with advanced tech in the new GLE. The one-of-a-kind E-Active suspension, the advanced MBUX infotainment system, and the superb inline-six with EQ Boost are among the most significant updates to the new model year. Even without a price tag yet, it’s safe to say that whatever premium Mercedes is asking over the outgoing model is worth spending. The new GLE is one of the smartest things on four wheels.