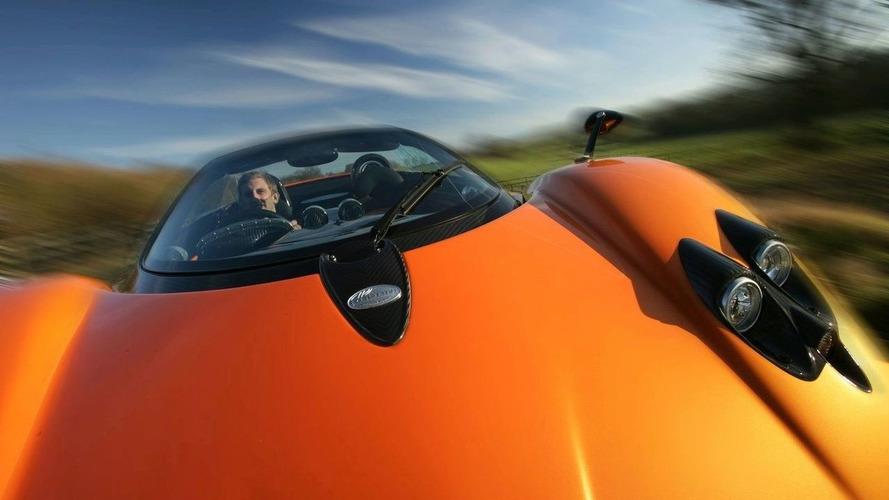 ...it was just another day when you're driving a bright orange Pagani Zonda F Roadster.

The battered Ford Escort in front slowed and demanded that we overtook, signalling and waving us to pass. Always the ones to oblige we gunned the 650bhp engine, dropping it down a cog for no good reason whatsoever apart from the wailing caterwaul of a V12 engine.

And as we catapulted alongside the beaten old Ford, the camera phones were waiting and the driver slowly, unwittingly, steered towards a crash with our €540,000 motor. Then there were two amateur photographers invading the shoot, it was just another day when you’re driving a bright orange Pagani Zonda F Roadster.

This is number four of just 25 Zonda F's and they make Ferraris or Lamborghini's look common as cow dung by comparison. So even though the basic design of the Zonda is nine years old, and we’re due a new model this year, possibly even at the impending Geneva show, this car is still capable of stopping traffic so long after Horacio Pagani first shocked the establishment with the new benchmark in the hypercar world.

It looks best from the back, which is the first glimpse almost every other driver will get as it streaks past. That Gatling Gun exhaust is the signature tune of the Zonda family and the F’s single-plane rear wing, carbon diffuser, intricate wire meshwork and pearlescent paint could all form the basis of a thesis. It’s one of those cars that you’ll never get tired of, because you’re centre stage every time you go out the garage.

That’s the thing with these cars, you could spend days poring over the details, the way the carbon-fibre weave matches perfectly, the glovebox comes with the kind of clasp that could adorn a woman’s purse and the machined switchgear sits so elegantly on the centre console plate that catches the light just so. Then there’s the other worldly instrument panel with dials like Rolex bezels.

The eye wanders past the fact that the handbrake is a bog-standard number covered with a dramatic metal collar, or that months of abuse meant the roof clasp struggled to engage, to the immaculately engineered brackets that hold the seat and the proud mirrors atop those wafer thin front wings. This car is so beautiful that you want to buy in to the idea of perfection, it captivates the imagination like nothing else – not even the comparatively clinical Enzo.

If anything the roadster surpasses the coupe’s fine groundwork as this car loses the bubble canopy that came just a little too far towards the front of the car. From the side the Roadster looks even lower slung, more chiselled and more menacing. It’s pure theatre, from every angle.

Over-the-top thinking like this that made us fall in love with cars in the first place. The Zonda F Roadster is dreams made real, the kind of thing kids used to sketch on the back of books and the modern day answer to the Lamborghini Countach that used to sit on all our walls. In terms of pure supercar design, it doesn’t get better than this.

And it comes in at full Clubsport spec, which means it gets the 650bhp version of AMG’s 7.3-litre V12, which should make for a bullying thug of an engine that doesn’t like towns and lives for the long and winding road. But incredibly, this is a liveable supercar, one you could drive every day, if you could leave it by the side of the road and not worry about such a work of beauty.

The F Roadster comes with anti-stall technology to keep the revs coursing through the engine and despite a heavy feel that wonderfully ornate clutch pedal never sends the car bunny hopping down the road. With a higher gear it will handle town’s ruts and potholes with just a shudder bouncing through the carbon-fibre chassis that is reputedly stiffer than Sauber’s old World Sportscars.

It’s a magically simply car to drive, but then I cruised past a mirrored shop window in the centre of Rochester, where Group 20 is based, and was suddenly, classically reminded of the spectacular machine underfoot as the locals struggled to comprehend what was passing before their eyes.

As the road opened out I tickled the throttle, the huge engine took a deep lug of fuel and took off down the road like a stabbed rat. Unlike the equivalent Ferrari that needs revs to truly sing, the Zonda can pull from nothing like a tidal wave building from beneath. With the hood down on a rare gorgeous February day in England, that guttural tugboat of an engine that lies directly behind the seats spins lazily until called upon to simply suck in the world in front.

When that happens the V12 hardens to a screaming metallic symphony and the Zonda F Roadster becomes just about the best car on the planet. Without even a carbon roof to get in the way that big AMG now sings through a hydroformed exhaust – and that’s F1 technology at its best.

Just imagine for a moment soaring down an A-Road in a car that serves up 60mph in 3.6s, which sounds a touch conservative from the bright orange, quilted hotseat. And despite the inevitable aerodynamic problems of a chopped roof, the Roadster hits 214mph when presented with a runway, Autobahn or possibly the Nordschleife.

That’s just 2mph less than the Coupe, and let’s be honest we were never going to get near it in England anyway. We’d have finished up on YouTube with a car this bright, and then in prison.

It comes with a low-pitched fighter plane soundtrack rather than the whining Italian racecars we have come to expect, and has perhaps more character. With modified versions of AMG’s immense driver protection, too, Pagani has produced one of the easiest cars you can imagine until you hit the race track.

He switched to a lighter weave for F, his tribute to co-designer and close friend Juan Manuel Fangio, but with the open-top and closed cars developed side-by-side there’s just no significant losses attached the soft-top version. It would take a track and a tyre budget to explore the subtleties.

At road speeds, within sane limits, the Roadster just won’t budge and hangs on to the bends with the consummate ease of a thoroughbred at work. And the monstrous braking system, ceramic of course, is beyond capable of handling anything the casual road user can throw their way. Things apparently get trickier right on its limits, but nearby Brands Hatch wasn’t an option with a borrowed car.

I just had to drink in the looks of the local youths, the thumbs-up signs came thick and fast and a few hot ladies gave us the eye. And that’s what Zonda F Roadster ownership is all about, standing out from the crowd and producing a one-man, mobile stage show. Even if we’ll never own one, we should just be glad cars like this are there. And this is one of the last Zonda's we’ll see.

With the new car coming there will be no more Zonda's and it was a nightmare getting hold of this one – as Pagani’s delivery schedule simply didn’t allow for it. So we have to give a big thanks to Group20, a supercar club based in the UK, stepped in and supplied the car. If you visit England regularly on business and fancy something fancier than a Renault Clio from Europcar – this is the club for you.

At Group 20, 60 days driving costing just £15,000 for the year, and there’s no points system, the Zonda costs the same as the Range Rover or the Porsche. And the best part is it’s readily available. So if you can afford the £10,000 excess that goes with the understandably intense insurance policy, spend a lot of time in Britain and fancy turning up to business meetings in something special, get in touch and they’ll make your dreams come true.