The latest hotted-up SUV wants to do everything well, but quickly.

My childhood was seeded with the idea that, at some point in the undetermined future, I would have a car that could do anything. There were two primary culprits who perpetrated this myth: my uncle Ralph, and Michael Knight.

Ralph – a college professor, athlete, and hilarious bedtime story teller – would lull my brother, my cousins, and I to sleep with tales of an adventurous crew of do-gooders, and their go-anywhere “Carboplane.” For those of you unable to penetrate the portmanteau, that’s a car, a boat, and a plane, all in one spectacular vehicle. I don’t remember Ralph specifying how the Carboplane was motivated – an electrified, Muskian vehicle seems directionally correct to me now – but it was undaunted by any terrain the team might need to traverse.

Of course you probably know the other inspiration slightly better: A boundless, black, automaton called K.I.T.T. Sure, everyone remembers that Kight Rider’s whip could talk, but don’t forget that the Trans Am could also mount a moving big rig, fly, and drive through lava. Talk about a “no compromise” vehicle. 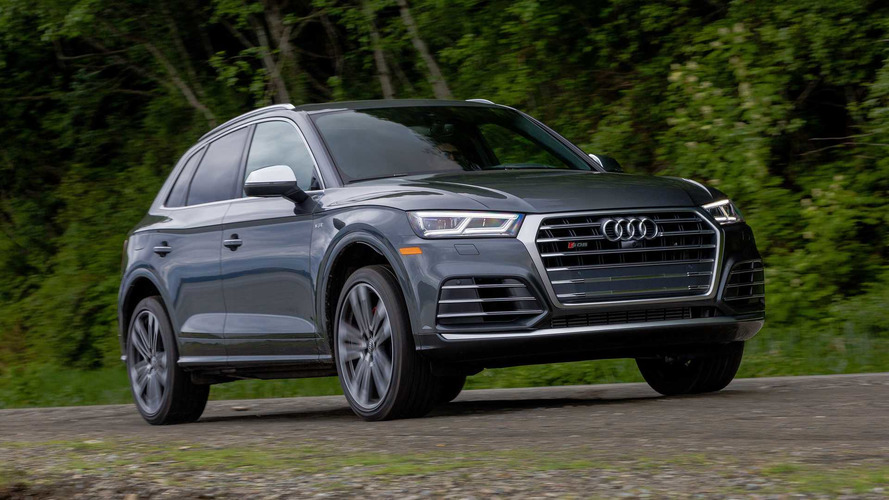 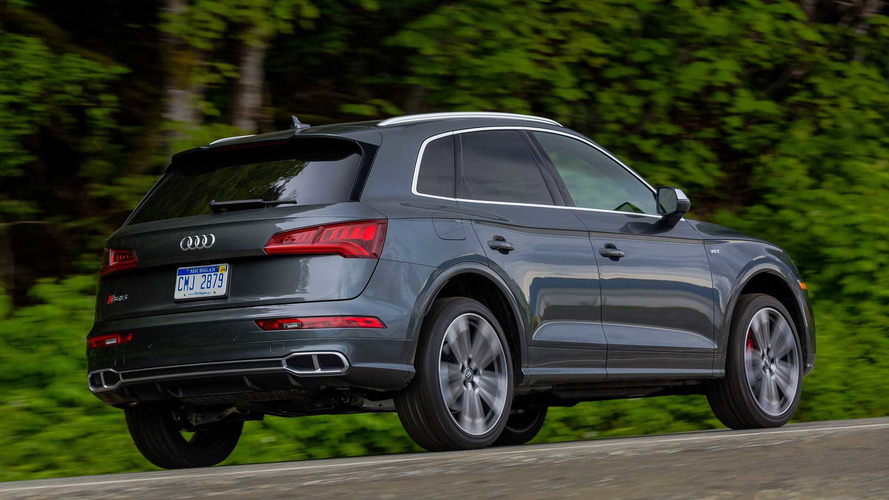 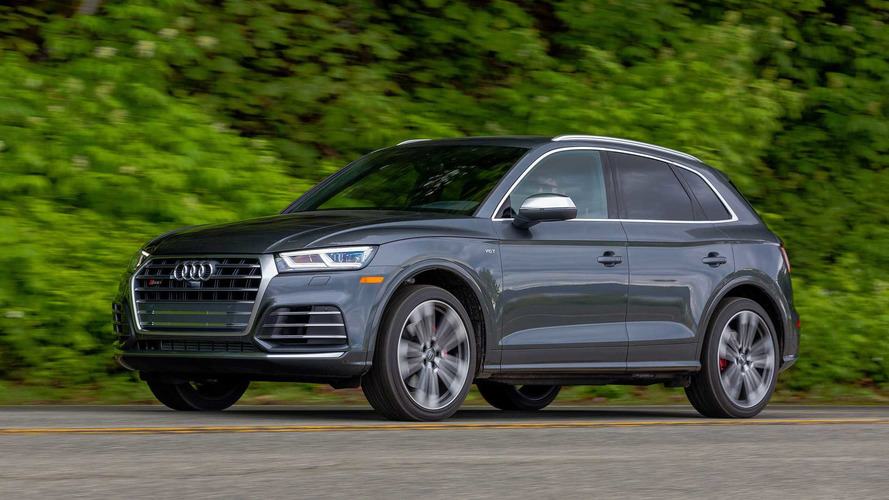 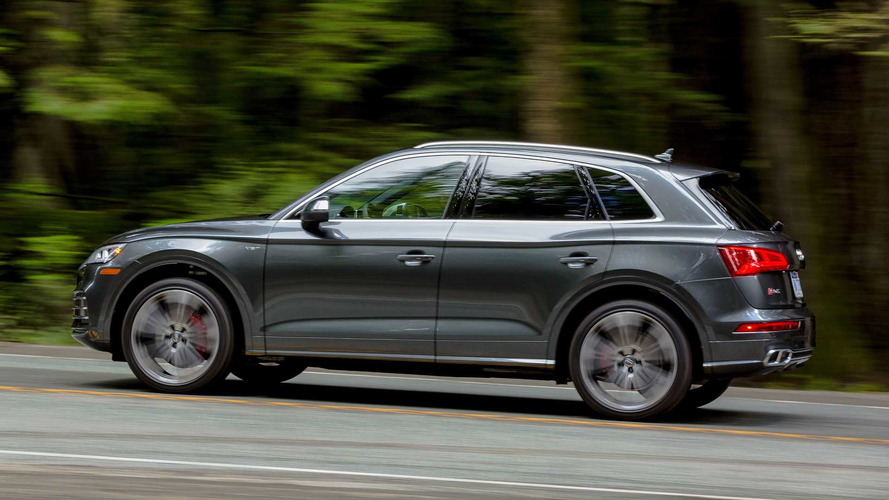 To start with the most disappointing bit: Audi’s revamped 2018 SQ5 cannot, to the best of my knowledge, navigate through a lava flow. But when held up to a standard just below that of Knight Industries, it does seem to accurately represent just how far we’ve come in building vehicles with SUV form factors, sports-car performance, and very little real compromise to separate those two seemingly disparate halves.

It’s important to remember at the start that the basic Q5, newly updated, is a pretty spectacular small SUV. Donor cars for performance variants don’t get much cleaner than this, with improved space in the rear seats, ample cargo room under the hatch, and driving dynamics that mimic the A4 sedan so successfully you’re likely to forget that you’re a few inches higher off the ground. The SQ5 builds on that platform and makes it markedly better, and decidedly more entertaining, in any number of ways.

The SQ5 builds on that platform and makes it markedly better, and decidedly more entertaining, in any number of ways.

Naturally, the most dramatic changes are evident in terms of the revamped powertrain. In place of the Q5’s turbocharged, 2.0-liter four-cylinder, the SQ5 rocks a turbo’d 3.0-liter V6. The engine, which will also show up in the S4 and S5, manufactures 354 horsepower and 369 pound-feet of torque (that last figure raised 22 lb-ft from the last-gen SQ5’s supercharged 3.0-liter). Those levels of power are enough to push the ute from 0 to sixty miles per hour in just 5.1 seconds, according to Audi’s stopwatch, and to a top speed of 155 mph.

More importantly – this isn’t a drag-strip vehicle – it was more than enough power for me to pass scads of slow-driving Canadians. Drop the throttle to the floor, and it was nothing to pass a logging truck on the dotted yellow, with a punchy exhaust note rising through the sound deadening materials, just enough to enliven the operation. The eight-speed automatic transmission is willing to play along, in both cruising and hammering operations. Remember when automatics used to be awful? 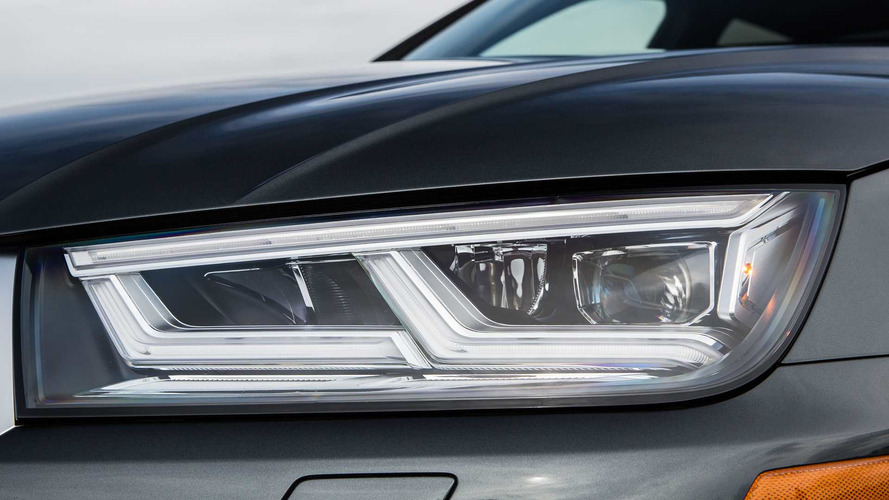 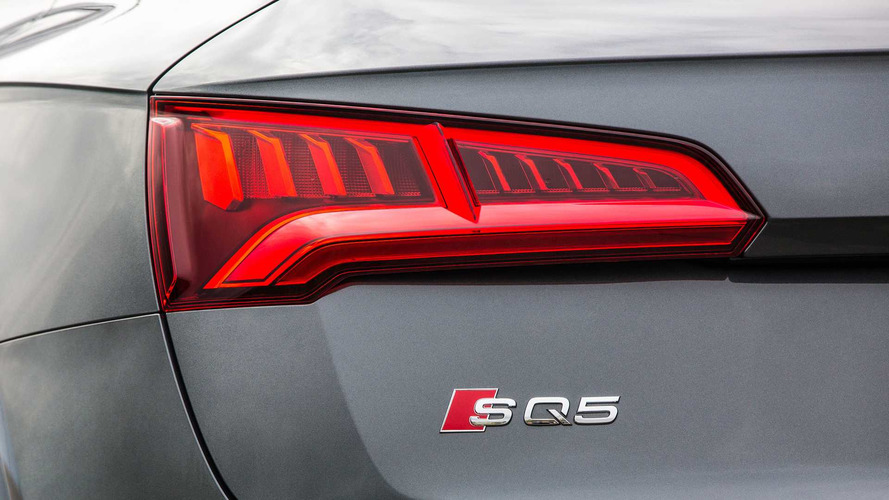 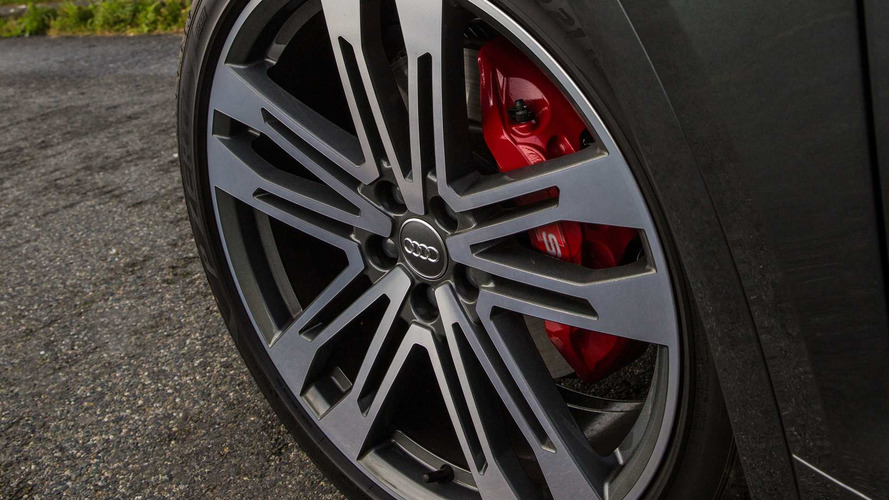 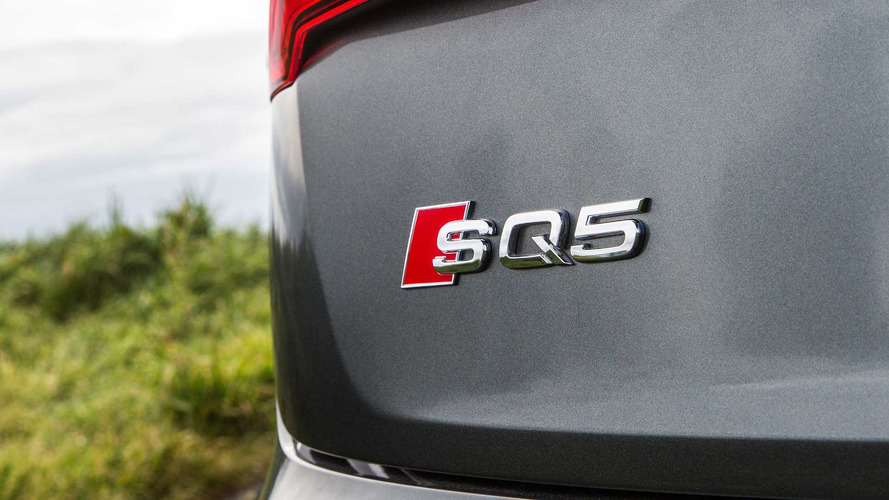 But my drive route for the first sampling of the SQ5 helped me to go far beyond evaluation of the straight-line performance. This was my first trip to Victoria Island, and after a mindless stint getting out of the British Columbia capital’s central city, it became readily apparent why Audi staged us here. Following coast roads and chasing vistas of snow capped mountains and breaking surf, the roads that brought me to Tofino on the north end of the island were twisting, climbing, and with just the right mix of glass smoothness and Snow Belt broken.

My test vehicle was equipped with the new, optional “sport adaptive air suspension,” replete with four modes and a tremendous amount of height variation. The setup lowers the ride height in the default setting by about 1.2 inches when compared to the stock suspension, gives a still lower access height for loading and unloading, and rises up in off-road mode for an additional 2 to 9 inches of ground clearance.

But critically for the do-anything-but-fast nature of the SQ5, the air ride combines with the five-link front suspension to offer stable, rapid, and joyfully repeatable changes of direction. The last 20 miles or so of my test was made on increasingly narrow and winding roadways, over which this Audi SUV did a credible sports sedan impression – body roll was surprisingly limited, and light-but-accurate steering proved pleasing to work around fast-flying combinations of corners.

The S Sport package that adds the air suspension to the SQ5 brings along a sporting rear differential in the bargain (and red brake calipers for you showy types), and at $3,000, tempts me into calling it a must-have for this car. Advanced off-roading ability and a willingness to stay flat in the corners does not, I suppose, a Carboplane make, but I still think Ralph would approve. 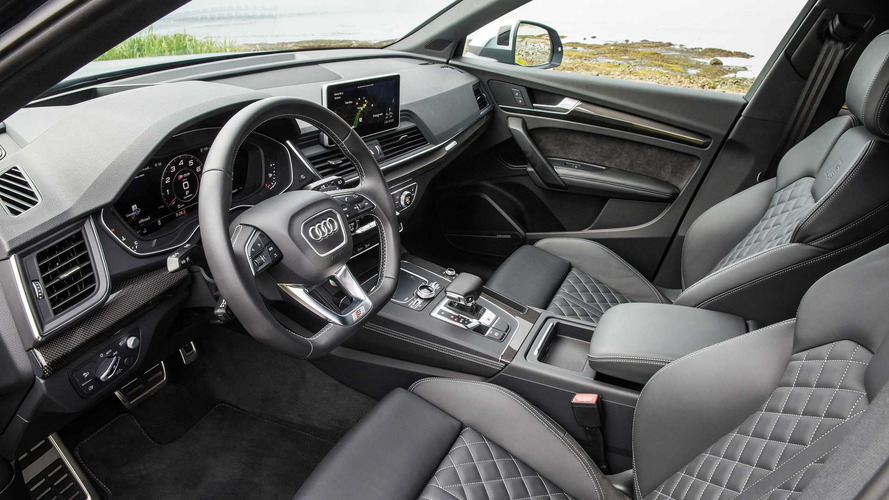 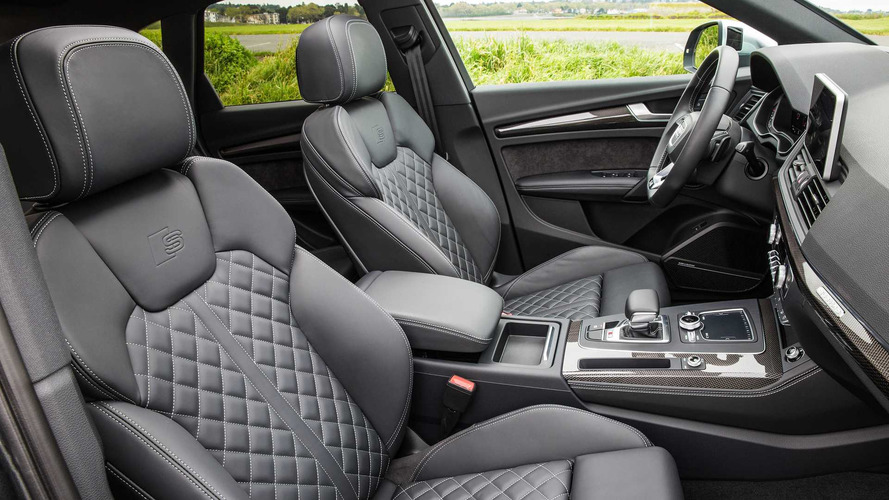 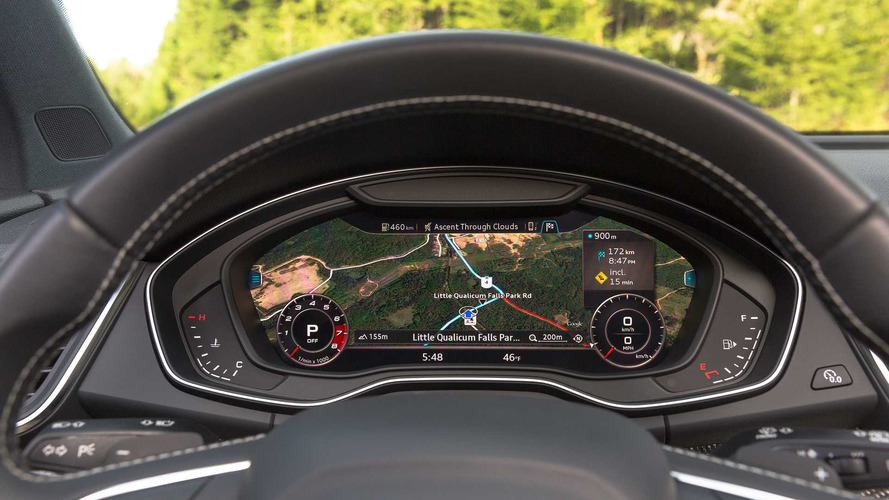 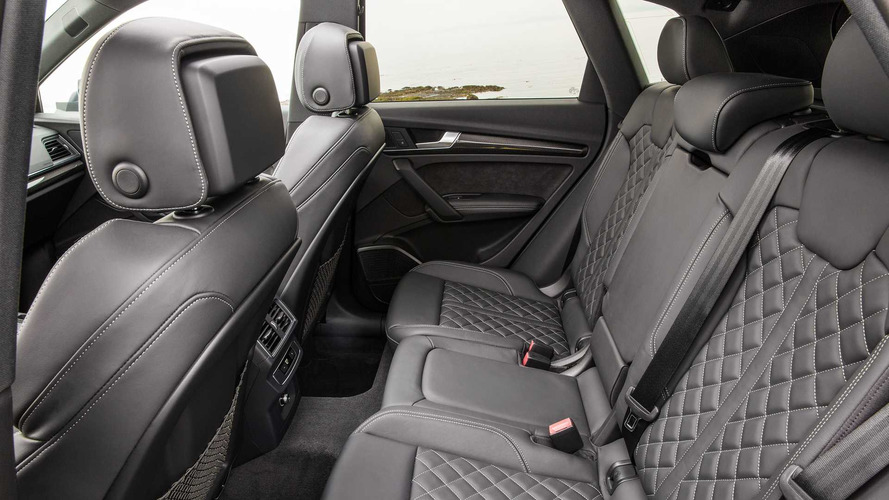 I didn’t do much more than drive the SQ5 quickly on this first date with the new vehicle, but the paper case for its functional nature looks pretty good. The Audi will tow a reasonable 4,400 pounds, which usefully trumps the tow ratings for the Mercedes-AMG GLC43, though not that 5,000-plus-pound-pulling Jaguar F-Pace. However, the Audi will tote more cargo in its capacious 57.3 cubic foot cargo area than either of those other fast trucks.

There’s a lot of room for people, too. I was as comfortable as expected in the front two sports bucket seats – though the bolsters on these Audi chairs do take me a minute to adapt to, what with me being a six-foot-five-inch, 250-pound large human. The surprising bit was that the back seats were spacious enough for me to ride in, too. Audi has scalloped out just enough knee- and headroom in the second row to make it very friendly for adult-sized bodies.

Your interests and priorities will vary, but, spec for spec, it’s hard for Jaguar and Mercedes to keep up with this SQ5.

From a design perspective, the interior is just a tick sportier than what you’d get in a standard Q5 or A4 (flat-bottomed steering wheel and whatnot), but still very clean and uncluttered for the segment. The advantage of Audi’s awesome Digital Cockpit can’t be overstated here, as it both allows a driver to focus his eyes forward while managing infotainment systems, but also allows the console to remain nicely spartan.

You could make the same argument for the design of the bodywork: sharp and attractive, but not showy. And, I mean, let’s face it, it’s nowhere near as lovely to look at as Jag’s new SUV. Like the recent A4 redux, I think this design will age well, but it won’t win the segment leader title on looks alone. 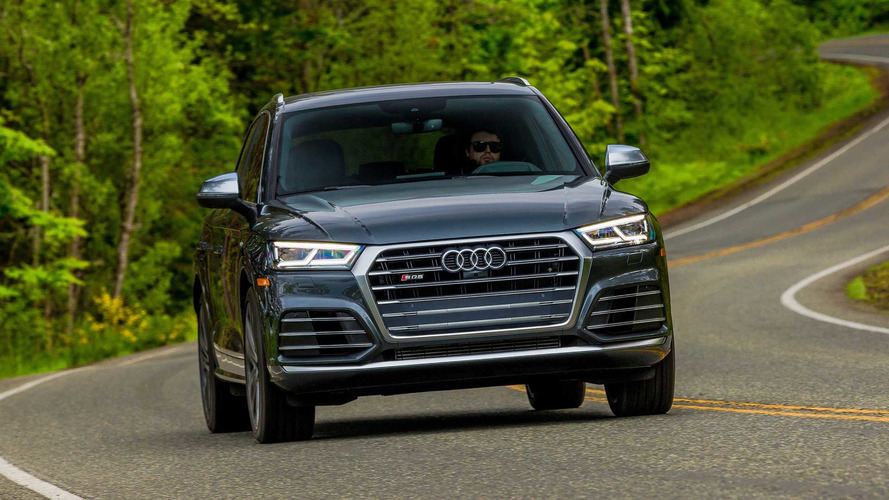 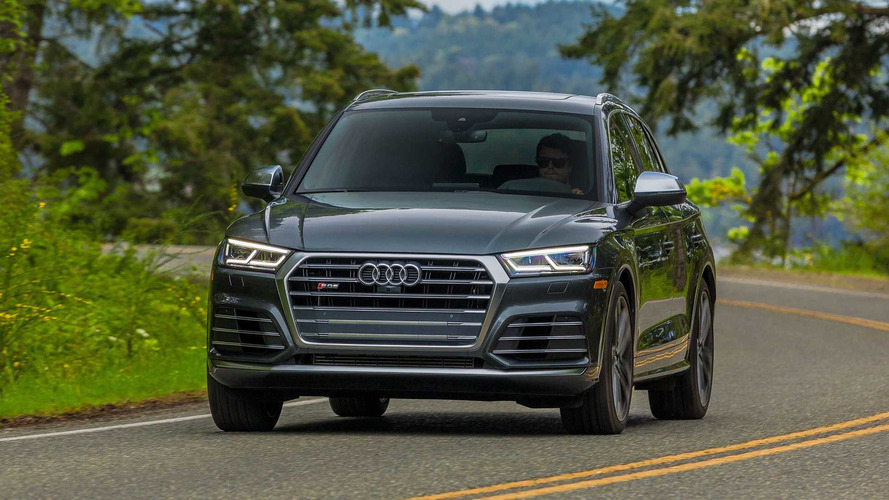 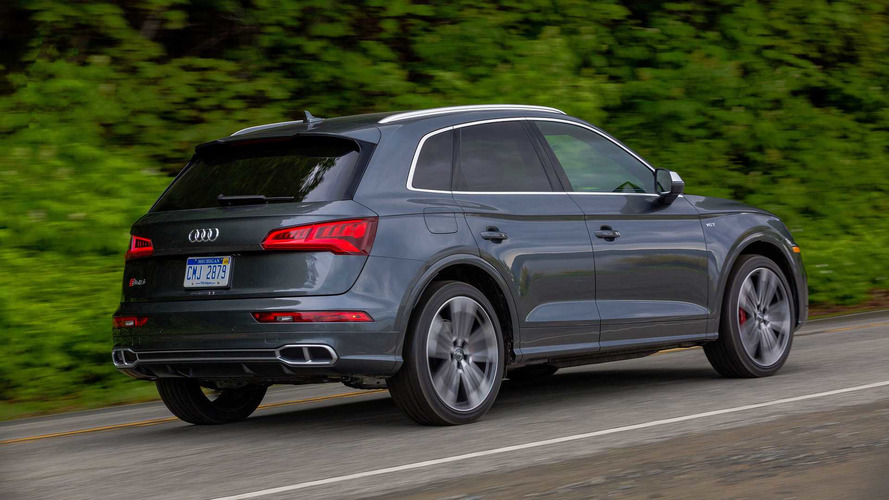 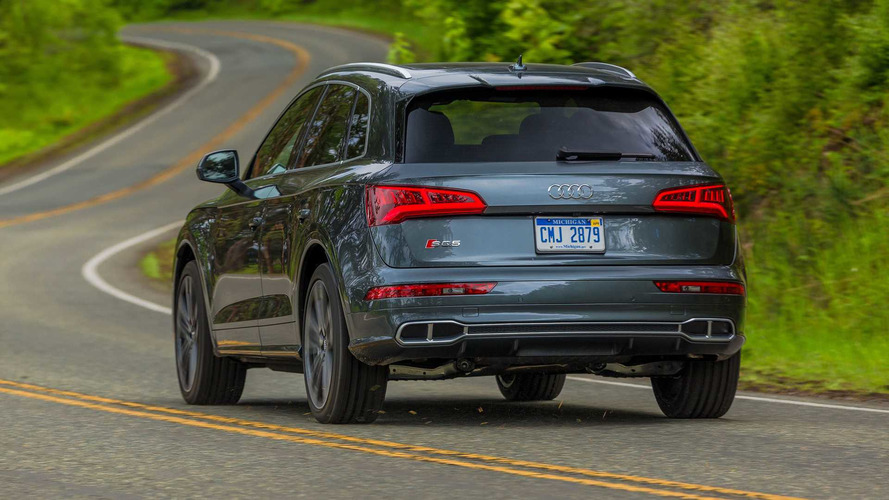 Starting at $54,300 for the basic Premium Plus model, the SQ5 just shades the GLC43, and starts about five grand lower than the F-Pace S – both of which are right in the wheelhouse in terms of power and performance specs. For me the sweet spot of the Audi configurator is at around $60,000, which buys the air suspension and navigation packages that I love, along with a slightly more interesting premium paint. Your interests and priorities will vary, but, spec for spec, it’s hard for the Jag and the Mercedes to keep up.

In fact, the single biggest argument against the SQ5 in this space, to my mind, is that the basic Q5 is just so dang good already. Yes, it’s less engaging than this track-team sibling, but not by much… and I’m not sure the delta between levels of driving joy is worth ten or fifteen thousand dollars.

Now, if I could pay for it to be lava-proof, that’s another bedtime story.