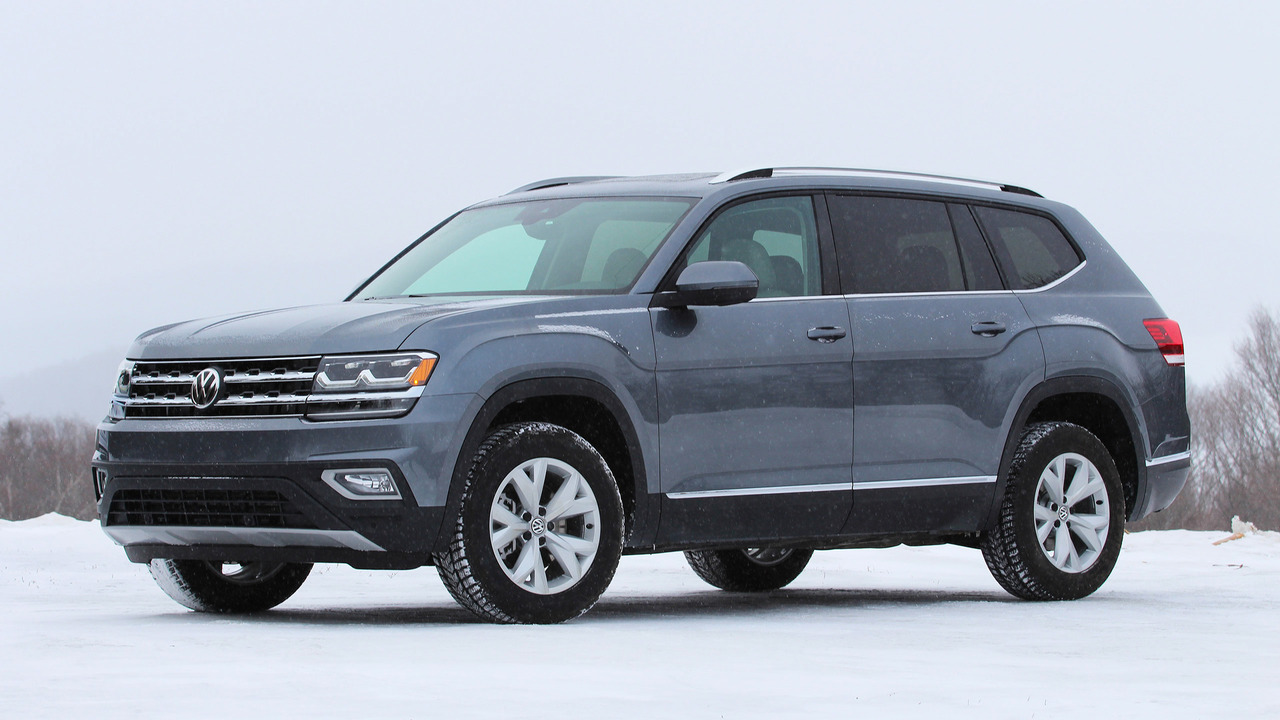 Volkswagen’s all-important Atlas is finally here. Is it worth your consideration, or is it too little, too late?

Once upon a time, Volkswagen set a goal of selling 800,000 cars in the U.S. annually by the year 2018. Four years – and one huge scandal – later, the company is struggling to crack 400,000. But if any new product is going to help Volkswagen regain sales momentum and polish its tarnished image here in America, it’s this new Atlas.

On a snowy March morning, I’m driving the new Atlas down a road in the Sacacomie region of Québec, sipping coffee at stop signs, listening to classic rock on the stereo. I’m not thinking about the huge weight on Atlas’ shoulders as it nears its on sale date in the U.S. in a few months. Instead, I’m enjoying the CUV’s comfy, heated seats. I’m watching snow land on the wide hood through the expansive front windscreen. I’m not focusing on any one feature in the Atlas, but as I examine the interior and reflect on the drive, I can’t find anything to get excited or complain about. It’s just… nice.

4Motion all-wheel drive keeps the big crossover surefooted and planted, even when I intentionally throw the Atlas into a snowy corner.

Volkswagen will offer the Atlas with a choice of two engines. The turbocharged 2.0-liter inline-four with 235 horsepower will be available exclusively with front-wheel drive, so for this wintry test in the Great White North, I’m behind the wheel of an Atlas SEL with the 276-hp, 3.6-liter V6 (yes, the old VR6 engine), equipped with 4Motion all-wheel drive. An eight-speed automatic is the only transmission available, and discreetly swaps cogs whether gently accelerating on a winding road or laying into the throttle to climb a steep, snowy hill.

One thing that’s mostly absent from my drive: slipping. The Atlas’ advanced 4Motion all-wheel-drive system is the same one found in the Golf R and Golf Alltrack, and it aids in keeping the big crossover surefooted and planted, even when I intentionally throw it into a snowy corner, hoping to eke out a bit of rear end silliness. In the Normal drive setting, the 4Motion system defaults to front-wheel drive, but the moment slip is detected, the rear clutches engage to send power to the back wheels. A full 100 percent of the engine’s torque can be sent to the Atlas’ hind legs if needed. Sport mode changes the transmission’s shift programming, and increases throttle response and adds weight to the steering feel. Eco does exactly the opposite, only sending power out back if absolutely necessary, and telling the eight-speed auto to shift up, ASAP.

Within the AWD system, drivers can choose between Onroad, Snow, Offroad, and Offroad Custom modes. Snow acts a lot like Eco, lightening up the throttle and steering, and keeping the engine from revving too high. But unlike Eco, the Snow setting sends power to all four wheels, all the time. Offroad does the same thing, and reduces the intervention of the traction and stability control systems. There’s even hill descent control, which works automatically at speeds up to 18 miles per hour on grades steeper than 10 percent – no need to engage it, just lift off, and let the Atlas do the work. You know, in case the ski lift breaks.

The upright design pays dividends inside, where the Atlas feels downright massive.

Any more discussions will have to wait, for now – after 30 minutes of driving through snow, there’s only so much I can discern about the Atlas’ on-road manners. Suffice it to say, I doubt this thing will somehow reveal itself to be a dynamic marvel, but further testing will likely reinforce my short experience in Quebec. The Atlas is a straightforward, easy-to-drive steed. Even on snow-covered dirt roads, it’s comfortable, quiet, and doesn’t lumber about. Think of it like a great big Golf. Solid.

The boxy dimensions and pronounced wheel wells give it a commanding appearance, even with the smaller 18-inch wheels seen here (20s are optional). Nothing about the Atlas’ design really screams Volkswagen; comparisons to the Jeep Grand Cherokee or deceased Kia Borrego are perhaps more appropriate. But despite looking large and in charge, at 198.3 inches long, 77.9 inches wide, and 69.6 inches tall, the Atlas is basically the same size as a Ford Explorer, and nearly 31 inches longer than a Golf, despite sharing the same MQB architecture.

The upright design pays dividends inside, where the Atlas feels downright massive. There’s ample head- and legroom in all three rows, an expansive windscreen up front, and a panoramic sunroof to let the light in. The second row can slide fore and aft, and tilt forward, even with a child seat in place. Access to the third row is tight, but manageable, and there looks to be decent head- and kneeroom, though I still wouldn’t ask adults to sit back there for long periods of time.

My brief stint in the pre-production Atlas gives a solid first impression. It's a good overall package, plain and simple.

All the Atlas’ interior materials and design will be familiar to anyone who’s been inside a Volkswagen lately. The plastics feel good, the leather-wrapped steering wheel is small in diameter, and all the buttons and knobs are exactly where you’d expect them to be. The big story is in the updated onboard technology. In the center stack, there’s a new, flush-mounted, eight-inch touchscreen that houses Volkswagen’s infotainment system, with Android Auto and Apple CarPlay compatibility; smaller screens are available on lesser models. And while this SEL test car has traditional gauges in the instrument panel, the top-level Atlas SEL Premium gets Volkswagen’s fully digital display – basically, a reskinned version of Audi’s Digital Cockpit.

Volkswagen estimates the Tennessee-built Atlas will be on sale by the end of the Spring, though don’t expect to see them in full stock at U.S. dealers until Summer. Pricing is expected to start right around $30,000, with a fully loaded SEL Premium example arriving just short of $50,000, putting the Atlas right in the heart of the seven-passenger crossover segment.

My brief stint in the pre-production Atlas gives a solid first impression. It's a good overall package, plain and simple, and one that should help Volkswagen find its way back into American driveways once again.