2017 BMW 5 Series First Drive: A supercomputer for the serious driver 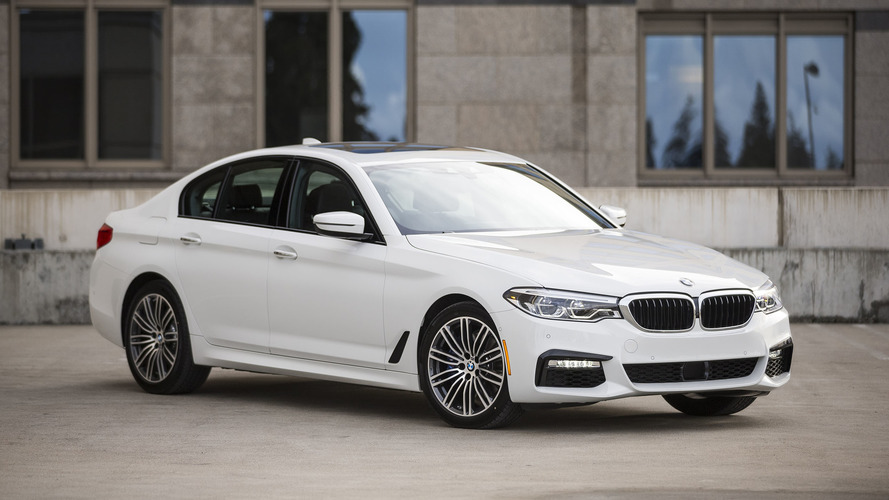 BMW has stuffed its new 5 Series with every piece of high-tech kit it’s got. Don’t sweat it though, there’s still a car in there.

Perhaps the most telling bit of the 2017 BMW 5 Series launch program was the question set thrown out by journalists at the pre-drive presentation. No one – and in my decade-plus career of attending these things, this might be a record – asked about the availability of a manual transmission. We had about 30 seconds of discourse in total about suspension and steering. And the powertrain slide was roundly photographed by the room, and then promptly ignored.

Following that was a solid 40-minute Q&A session about technology. Autonomous driving, automatic parking, wireless charging for a touchscreen-key, and tangential conversation about various radars, lidars, camera systems, and innovative tech startups that I’ve never heard of. Like the man said, the times, they are a changin’.

BMW will no doubt attract 5 Series intenders based on the driving chops of the cars that came before it, but nothing short of a techy tour de force will close the deal in today’s midsize luxury segment. Competitors include the super-sharp new Mercedes-Benz E-Class, which boasts digital instrumentation that would have colored a nerdy fever dream just a few years ago. And, quite evident from the BMW technology center in Mountain View, even shoppers who don’t really want a Tesla Model S kind of want a few party tricks that might shut up their multitude of Tesla-driving friends.

Nothing short of a techy tour de force will close the deal in today’s midsize luxury segment.

Allow me to ignore the digital layer cake for the moment, however, and talk about going down the road. A skill that this 5 Series – called “G30” in the always-critical BMW internal nomenclature – demonstrates in much the same fashion its predecessors always have.

BMW had two of four initial 5 Series variants on-hand for me to to sample: the 530i and 540i that will almost certainly combine to make up the bulk of sales volume for the model. The two no-shows – a plug-in hybrid 530e and the massively quick M550i – enter production and hit dealerships later, and will no-doubt be the subject of upcoming Motor1 reviews.

I spent the bulk of my time with the entry point to the model range, the turbocharged, four-cylinder-rocking 530i. The 530i effectively replaces the outgoing 528i, bringing 248 horsepower (an increase of 8) and 258 pound-feet of torque (a decrease of 2) with the new model designation. BMW estimates a 0-60 time of 6.0 seconds for the car, or 5.8 in xDrive all-wheel-drive form, and the real world experience is one of easy ability on ramps and during merging. I will admit that, in this larger-car luxury segment, a feeling of overwhelming power always makes me feel more comfortable with fast-scaling price tags, but most drivers will love this engine.

The car is clearly tuned for easy cruising in great comfort.

The new 2.0T is more frugal in the 530i than the outgoing 528i could manage, too. Ratings of 24 miles per gallon city, with 34 on the highway and 27 combined, are all pretty massive improvements over the older car’s 20/31/24 scores. Daily Bimmer driving just got a bit less expensive, with no dynamic downside.

The eight-speed automatic transmission – no, there isn’t a manual option – is well matched to the engine, as well. I found shifts to be smooth and quick on the few occasions I used the steering wheel-mounted paddles, and well managed in the fully automatic setting. My drive route traversed a full spate of Northern California driving situations – from stop-and-go highway traffic to coastal switchbacks, and I rarely found the eight-speed in a gear I didn’t care for.

The twistier roads gave me ample opportunity to play with the available drive modes, too – well, two of the three anyway, EcoPro wasn’t selected much. But the difference between Comfort and Sport seemed rather small to me. Ride compliance did feel marginally higher in the softer Comfort mode, though Sport was hardly brutalizing. And both modes were fine for quick cornering, where the 5er felt athletic but not so razor-edged as to undermine its laid-back character. Like all BMWs, there’s an underlying sense that, if I were to track this sedan with all of the electronics switched off, the chassis would prove balanced and the steering slightly dead. But the car is clearly tuned for easy cruising in great comfort.

That big display is also a touchscreen, and the fluid, fast response that if offered up quickly had me adjusting with my fingertips, rather than with BMW’s physical controller.

Cruising can be accompanied by relative silence (the 530i runs quiet) or rich sound, as the driver wishes, as long as they’ve dropped some serious cash on the optional Bowers & Wilkins audio system. The $4,200 option buys you 16 speakers, a 10-channel amplifier, and 1,400 watts of power. But impressive specs don’t speak to the clarity and richness of the sound; listening aficionados will no doubt find value in the high-priced hifi, with every track enjoyed.

But even the power of the optional audio pales in comparison to that found in BMW’s next-gen infotainment software, iDrive 6. The system is displayed by a very high-resolution, 10.2-inch screen that dominates the dashboard. Graphics are extraordinarily fine, very legible, and all seem to work equally well in bright sunlight (with no washout) as they do at night.

The interface is solid as well. I started the day using the BMW control dial that has been refined over each generation of iDrive, and found it’s still easy to operate. But that big display is also a touchscreen, and the fluid, fast response that if offered up quickly had me adjusting with my fingertips, rather than with BMW’s physical controller.

Even the most basic gestures – clockwise and and anti-clockwise hand rotations to turn the stereo volume up and down – proved finicky for me to execute with absolute regularity.

A tile-based layout allows for a multitude of information visible with just a glance at the screen. You’re able to configure which info tiles appear in your “home” screen, so map/navi, weather, telematics info, or even news headlines can be grasped with minimal looking away from the road. That simple and clear top layer of information caps a very deep and broad suite of software below; you might take just minutes per drive actually using your favorite iDrive features, where configuration and exploration of the total experience could take hours. Certainly I’ll need to take a deeper dive into the system when I have more time and less driving to do, but the early returns are promising.

BMW has also integrated gesture controls into this 5er, as debuted on the current 7 Series. To be frank, I still don’t care for them. Even the most basic gestures – clockwise and and anti-clockwise hand rotations to turn the stereo volume up and down – proved finicky for me to execute with absolute regularity. Hand placement and gesticulation speed seemed critical for success, and the learning curve too steep to keep me from using the traditional controls. I believe this feature may help dealers sell a few cars to wide-eyed shoppers, but I don’t think it’ll improve lives.

The same can be said for the optional Display Key, another carryover from the 7 Series’ bag of tricks. The touchscreen key can give you status info about your vehicle, but it’s fanciest application is as a controller for the Remote Control Parking system. You may have heard of this: With the swipe of a finger (and the active attention of a swathe of advanced sensors around the car), one can pilot the car into or out of a tight parking space, without having to squeeze behind the wheel. I don’t want to be a buzzkill here, and I do think there’s some practical application for being able to drive your car in and out of really narrow parking situations with the controller… but is this really a killer app, or just an impressive sideshow?

I do think there’s some practical application for being able to drive your car in and out of really narrow parking situations with the controller… but is this really a killer app, or just an impressive sideshow?

On the other hand, the 3D Surround View cameras seem like a practical solution to everyday parking headaches, like tight spots and close curbs. BMW has also linked the camera system to a smartphone app called Remote 3D View, which allows you to see what the cameras are seeing from your phone’s screen. The app could prove to be a nice ancillary safety feature, by letting you have a look around your car before walking out to it late at night, let’s say, or perhaps if you’ve parked in a less-than-savory corner of town.

Lest I leave it out, I’ll point out that there’s plenty of technology aimed at making driving quite safe, as well. BMW’s Active Cruise Control with what it calls “Stop & Go” should keep tired commuters safe from dumb fender benders; the systems combine radar cruise with the ability to follow at a safe distance, all the way down to a full stop (and up to a max speed of 130 miles per hour). Further “Active” features include lane-departure warning and lane-keep assist; there’s even an “evasion aid” that is said to help in emergency steering situations (I didn’t encounter any).

Throw all of those smart sensors and accompanying software together, and you also get a BMW that’ll drive itself for a fair bit of time. Semi-automated steering is also said to aid with driver fatigue, and allows one to safely keep hands off the steering wheel for up to 50 seconds. I’ll be honest: I used the system in steady traffic and in the well-marked confines of the HOV lane, and despite flawless performance I grabbed the wheel before the indicator told me I needed to. Call that a failure of human belief, not German technology.

It can still entertain a driving enthusiast, even when its story is more Silicon Valley than The Transporter.

Very little of what I’ve outlined thus far comes cheaply. The 530i has a very competitive starting price of just $51,200 – just about a thousand more than where the 528i kicked off. But the options make it easy for your configurator finger to balloon your monthly payment. My test car had, for instance, $4,900 wrapped up in driver assistance, which wasn’t even a thing a few years ago. The basic Driving Assistance Package (head-up display, active park distance control, rear-view camera) is $1,800; Driver Assistance Plus and Driver Assistance Plus II (for real), add the parking assistant, surround view cameras, and the active driving assistant, for $1,400 and $1,700, respectively. The premium pack is $2,600; the M Sport pack is $2,600 (plus $700 more for dynamic damper control); the lighting pack (adaptive full LED lights, and auto high beams) is $1,050. And the bottom line on my sample car was a staggering $74,160.

Tread lightly here and you can have one heck of a nice machine for under $60K, of course. I’d probably throw down on the M Sport bits (love that thick-rimmed steering wheel) and the killer stereo, and call it a day. In any case, when the car goes on sale on February 11, there will be any number of ways to walk out of your friendly dealership, happy with the car you’ve just bought or ordered.

This G30 5 Series is a dramatically good car. I’m certainly not alone in wanting to drive it back-to-back with great new offerings like the E-Class and Volvo S90, to see just how well it competes with some of the finest machines in the luxury segment today. The fact that it can still entertain a driving enthusiast, even when its story is more Silicon Valley than The Transporter, doesn’t go amiss, either.