These are the best microfiber towels for drying, cleaning, polishing, and everything in between.
By: Aidan Pounder
10/12/2022 3:44 pm
Best Overall
Mr. Siga Microfiber Cleaning Cloth

There’s nothing worse than finding streaks, scratches, or water spots on your vehicle after a car wash or detailing. To avoid this, it’s smart to have one of the best microfiber towels available.

The best car drying towels are typically made from microfiber due to its absorbent properties. We tested towels with soft microfiber by conducting a car wash and then drying various panels of the car with each of our top picks for microfiber towels.

The size of the microfiber towel you purchase is a personal choice, but it should line up with your intended use. If you’re looking for a towel that can get into all the nooks and crannies, then you might want a smaller towel. If you want a towel that can dry your car as quickly as possible, then you may opt for a larger or extra-large towel. However, it should be noted that the larger the towel you buy the more difficult it may become to wield and use.

Microfiber by definition is 100 times finer than a single human hair. That doesn’t mean that every microfiber towel features the same fibers or even the same blend of materials. It should be noted that not all microfiber towels are meant to be used on your car. Below, is a list of common types of microfiber towels you may encounter:

It may seem nitpicky, but after the edges of a microfiber towel blemish your car’s paint, you’ll be kicking yourself for not considering your towel edge. Towel edges are often the most overlooked part of a towel, but they can oftentimes cause the most damage. While the towel itself may be made from soft microfiber, the edges of these towels may not.

We recommend that you find an edgeless towel or one with a rolled edge. The soft edges of these towels will assure that you don’t damage your car’s exterior. If you feel like you must have a towel with edges, we recommend those that are silk-banded, made from silk, or those that are microfiber stitched as the soft material won’t leave scratches behind. 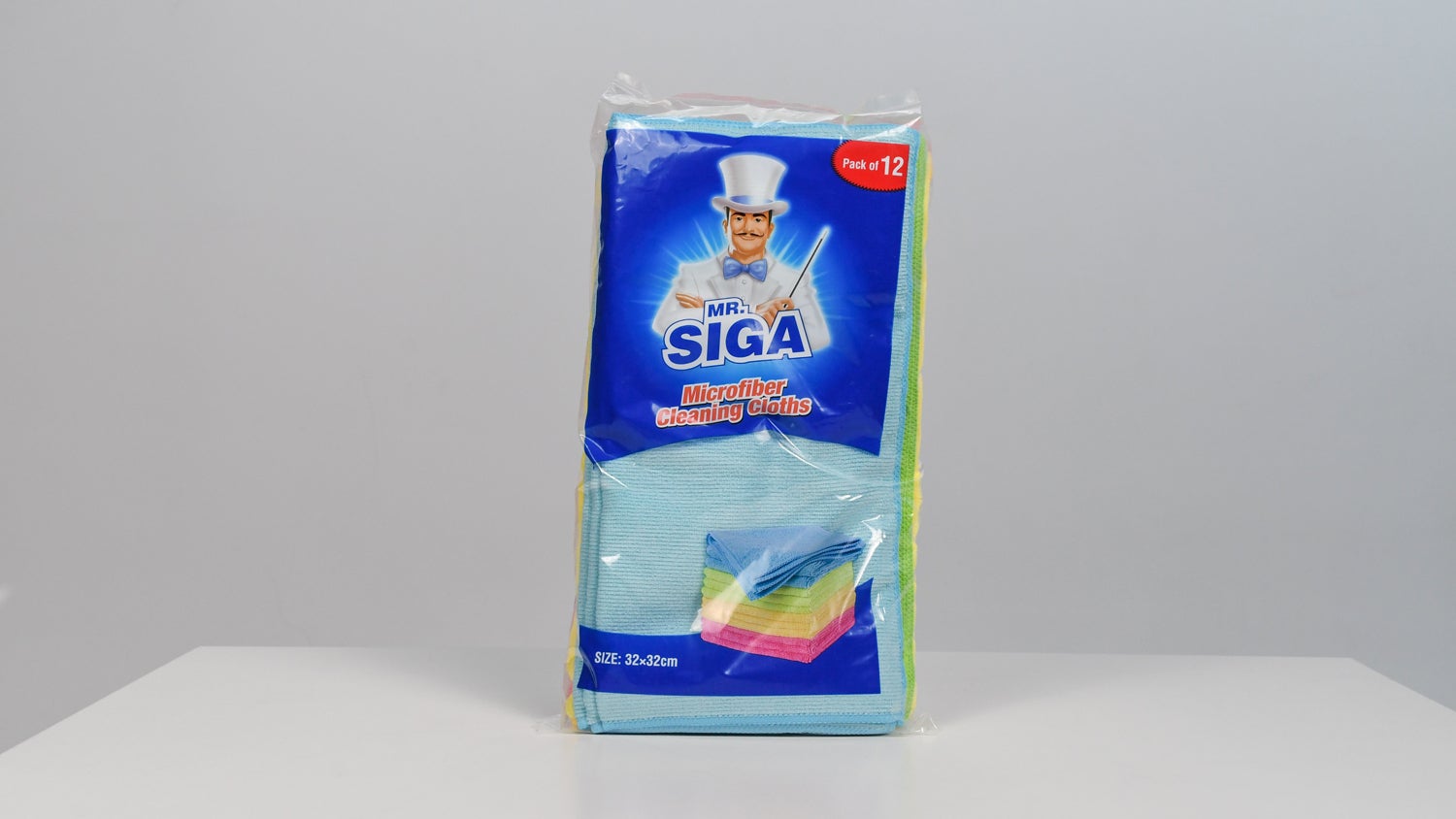 The Mr. Siga Microfiber Cleaning Cloth is a microfiber towel consisting of 85 percent polyester and 15 percent nylon, making it non-abrasive and extremely absorbent. Featuring high-quality stitching with reinforced edges, these microfiber towels won’t unravel and should last through hundreds of washings.

These microfiber towels are lightweight, which means they dry quickly. The soft microfiber won’t scrape paint off of your car’s paint job and additionally won’t leave streaks behind. In terms of use and care, the manufacturer recommends hand or machine washing the towels separately with water colder than 104.0 degrees Fahrenheit.

Not only is this towel extremely absorbent, but it also doesn’t leave a trace behind after use and came out of the washing machine looking brand new.

Reviews speak to the microfiber towel’s ability to clean up grime and its functionality on delicate surfaces. Many reviewers also mention how lint-free it is when wiping down surfaces. A number of reviewers warn that although you can reuse these towels, you shouldn’t use dryer sheets or fabric softener when you throw them in the washing machine, as the cloth may become less absorbent.

The product description notes that this towel is great for buffing sealants or dried car wax and wiping away moisture. This car drying towel also features silk edges to further reduce scratches. The towel’s density, measured in grams per square meter (GSM), is 380.0. This microfiber towel is dual-sided, allowing you the ability to choose how much pile you need.

There’s a lot to appreciate about the Chemical Guys towel, especially its size. This towel was perfectly sized to allow for wiping while still being large enough to make the task of drying a car easier.

Reviews note the excellent absorbency of the microfiber towel on its long pile side, as well as its car cleaning and buffing functionality. Many reviewers believe this product is a professional-grade premium microfiber towel.

Negative reviews forewarn that you need to shake and wring out these towels before using them to get rid of any loose lint in the packaging.

The Amazon Basics Microfiber Cleaning Cloths come in a pack of 24 for the same price that most competitors charge for 1 to 3 cloths. This microfiber towel is a 90/10 blend consisting of 90 percent polyester and 10 percent polyamide.

These towels are extremely soft and durable, with the manufacturer claiming the towels can be washed “hundreds of times.” This is not the only claim made by the manufacturer in the product description, as this car drying towel should be able to absorb eight times its own weight. Additionally, the product is lint-free and streak-free with 186.0 GSM.

The first thing our team noticed about the Amazon Basics Microfiber Cleaning Cloth is its value. Although value and cost aren’t criteria categories for our testing, it’s hard to ignore the sheer number of towels you receive for such an affordable price.

Reviews speak to the cleaning cloth being excellent for car detailing and its durability even after being put through a washing machine several times over. Many reviewers mention the incredible value of the Amazon Basics Microfiber Cleaning Cloth.

The Chemical Guys MIC1995 Gray Woolly Mammoth is enormous, just like the extinct animal it’s named after. This dual-sided microfiber towel has a 1.0-inch thick microfiber pile and is 36.0 by 25.0 inches. To avoid leaving any scratches behind, this towel has silk-banded edges so 100 percent of your towel is used in the car drying process.

The edges of this towel are not only silk-banded but also microfiber-stitched. The product description asserts that this car drying towel can hold over a gallon of water and dry an entire car in just one pass. This microfiber towel consists of a 70/30 polyester to polyamide ratio.

The Chemical Guys MIC1995 Gray Woolly Mammoth is a massive microfiber towel. While size wasn’t considered a testing criterion, the size of this towel is its biggest plus and largest takeaway. Its size means it easily absorbs moisture but makes actually using the towel a bit overwhelming.

Reviews mention the microfiber cleaning towel’s thickness and softness, alongside its moisture absorption properties. Many reviewers speak to the sheer size of the Chemical Guys MIC1995 Gray Woolly Mammoth compared to paper towels or other microfiber towels for cars. Negative reviews mention this product’s tendency to leave lint behind.

Designed to help you keep your vehicle clean, the Carcovers.com Microfiber Car Towels are a quality option. Conveniently sized, this microfiber towel felt good in the hand, yet still offered ample space to apply wax or dry the exterior of your car. Additionally, this microfiber towel can be used for interior detailing and auto glass cleaning.

The Carcovers.com Microfiber Car Towels came across as quite capable through our testing process.

Microfiber Towels: How We Tested

A team member tested each product on a car, taking note of how well the microfiber towel absorbed water, if it left any scratches, and its durability after being machine washed. Each microfiber towel was given a rating out of 5 stars based on this criteria.

The microfiber towels in this article went through two rounds of reviews. We started by searching Amazon for top products, looking at factors like Prime shipping eligibility, customer ratings, Amazon superlatives, and prices. Our product testing team ordered the five microfiber towels that best met these standards.

Each year, we test over 350 auto products on vehicles and in our testing lab. Our team of product testers thoroughly researches top products, unboxes and puts our hands on each component, and tests the items on real vehicles before making recommendations to readers.

GSM stands for grams per square meter. GSM measures the density of a towel, which then gives you an idea of how thick, how absorbent, and the pile length of the towel.

Depending on the grade of microfiber, microfiber drying towels can be used for a variety of purposes. They range from cleaning tools and polishing cloths, and can also be used as standard bath towels.

Because of their excellent absorption tendencies, they also make great shop towels for auto garages and car washes.

From a durability and absorption standpoint, microfiber towels often outperform cotton textiles. The downside is tiny microfibers are released into the environment every time we use and wash microfiber towels, and they have stricter laundry needs when using a washing machine.