Editorial Note: This content was researched and produced by Motor1.com‘s expert review team. Links in this article may result in us earning a commission but do not impact our advice or recommendations. Learn More

In our review of the best dash cams, we listed the Kingslim D4 as our top recommendation because of its relatively low price, easy-to-use features, and many positive customer reviews. In this review, learn more about why we like the Kingslim dash camera and which of its features we would change.

The Kingslim D4 Dual Dash Camera features a front 4K camera and a rear 1080p camera and simultaneous recording in front of and behind your vehicle. At around $120, it’s an affordable dash cam option. If you’re considering an entry-level dash cam, this is a good pick.

We tested the Kingslim and found it easy to set up and use. It offers excellent image quality during the day and to a lesser extent at night.

In addition to front and rear cameras, the Kingslim D4 comes with:

This vehicle dash camera does not include a class 10 microSD card, which is required to record and save video. You can buy a microSD card for around $15.

The Kingslim also does not come with a cable that can connect the camera to your computer. You can connect your iPhone or Android to the Kingslim via Wi-Fi. The Kingslim app allows you to transfer saved videos cordlessly. However, this can take some time, especially when downloading 4K video. 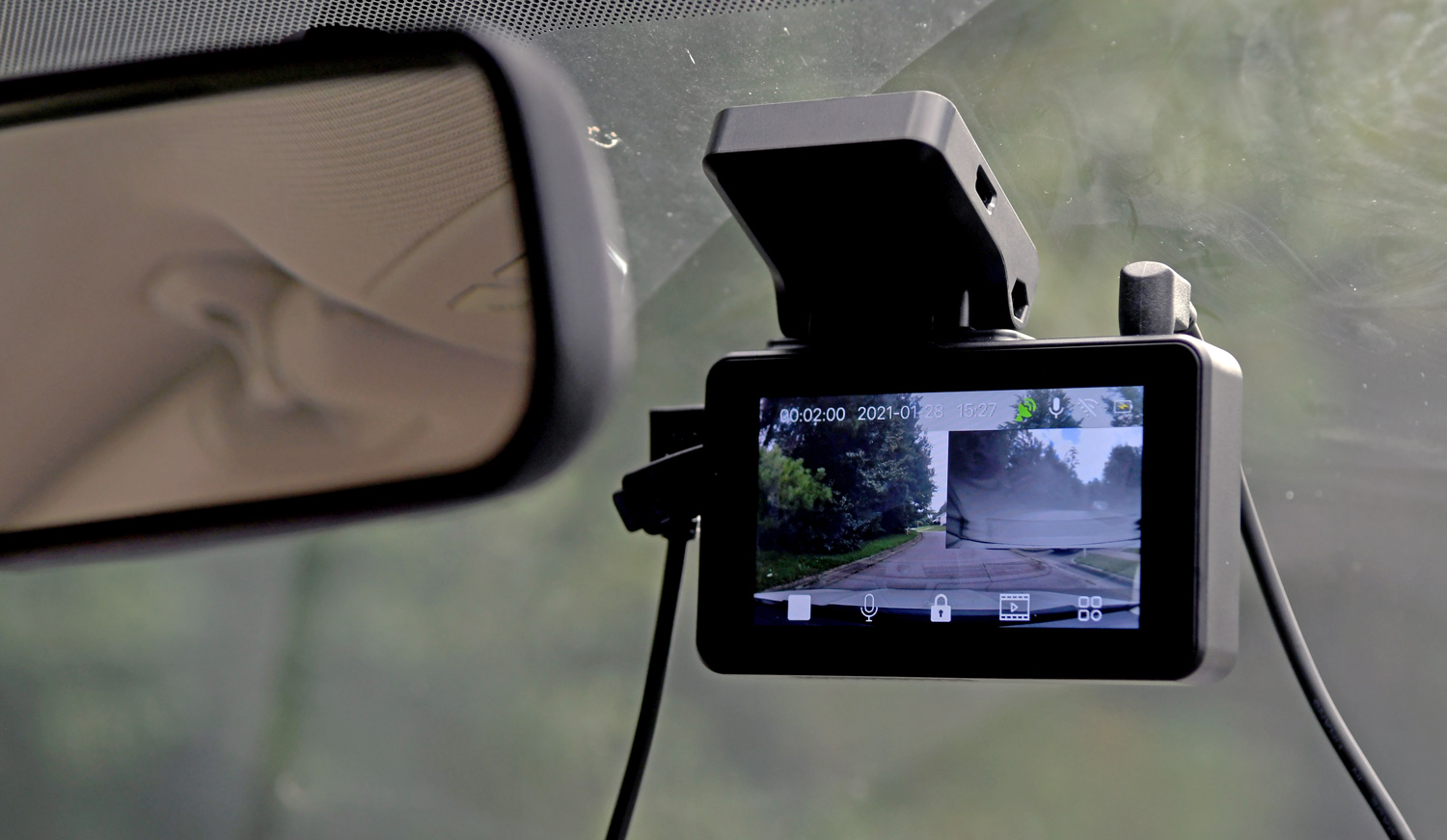 Our review team tested several dash cams and evaluated each camera based on the following criteria:

Ease Of Installation: 3 Out Of 5

Because the Kingslim features a front camera and a rear camera, it requires a little more time and effort to install than other dash cams. You will need to tuck wires into your upholstery if you do not want them to show. This is not too difficult but does take time.

Applying the camera to your front windshield involves an adhesive mount. The Kingslim connects to this mount and can be detached without removing the mount if you want to remove the camera from your car to review footage.

Adhesive mounts can come unglued after exposure to enough heat, and some customers have noted this happening. We did not encounter this issue in our product testing, however.

Another issue with the Kingslim mount is that it does not swivel from left to right. If you want to adjust the camera’s horizontal axis, you’ll need to detach and reattach the adhesive. You can tilt the camera up and down, however. 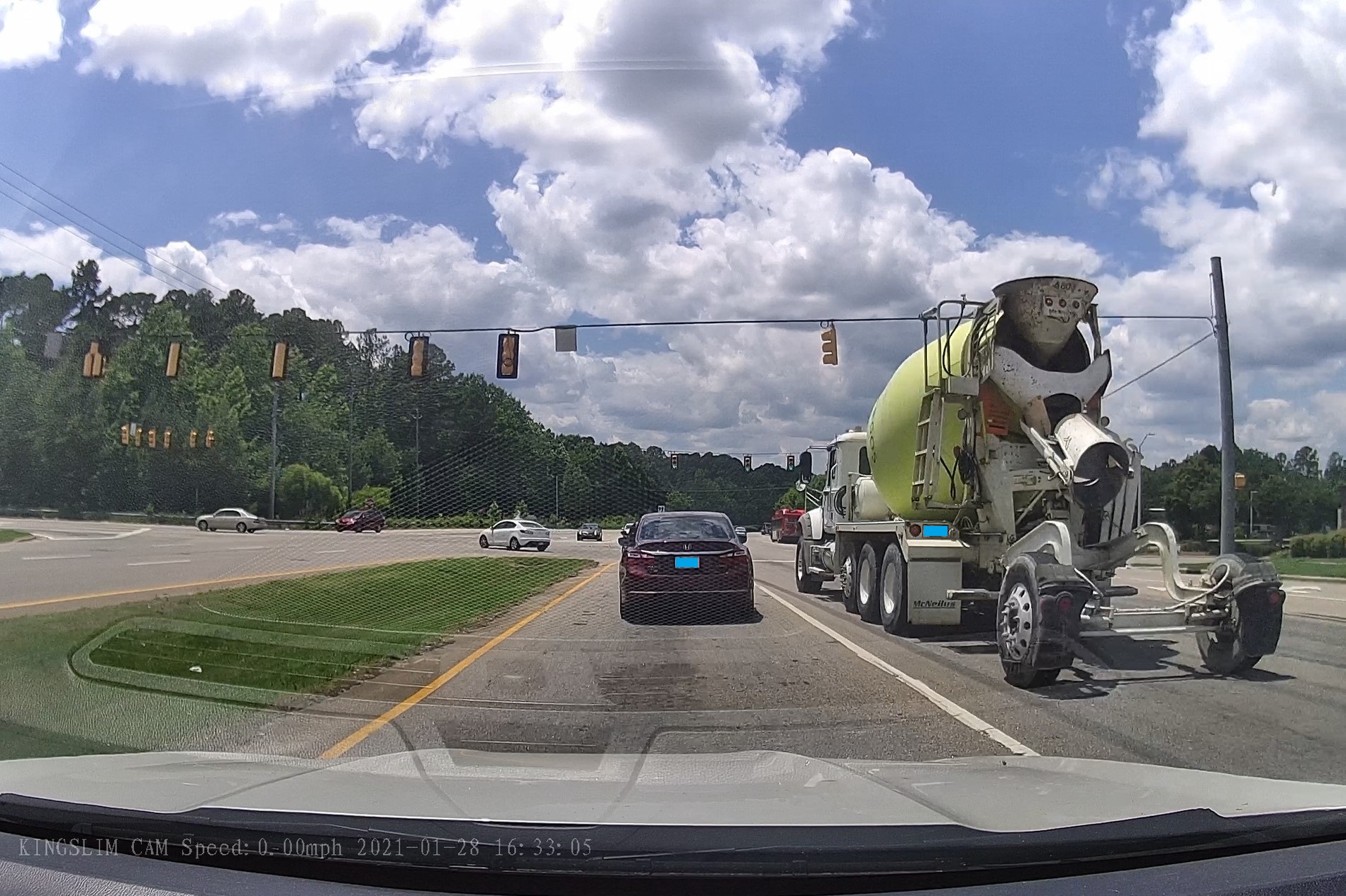 During the day, the Kingslim’s video quality is crisp and clear. The front Kingslim camera records at 1440p, 30 frames per second. The rear camera records at a slightly lower 1080p. You can switch to front view in QHD 2.5K and rear view in full HD 1080p for daily video recording.

Both the front and rear cameras perform exceptionally well during the day, clearly capturing important information such as license plate numbers and road signs. 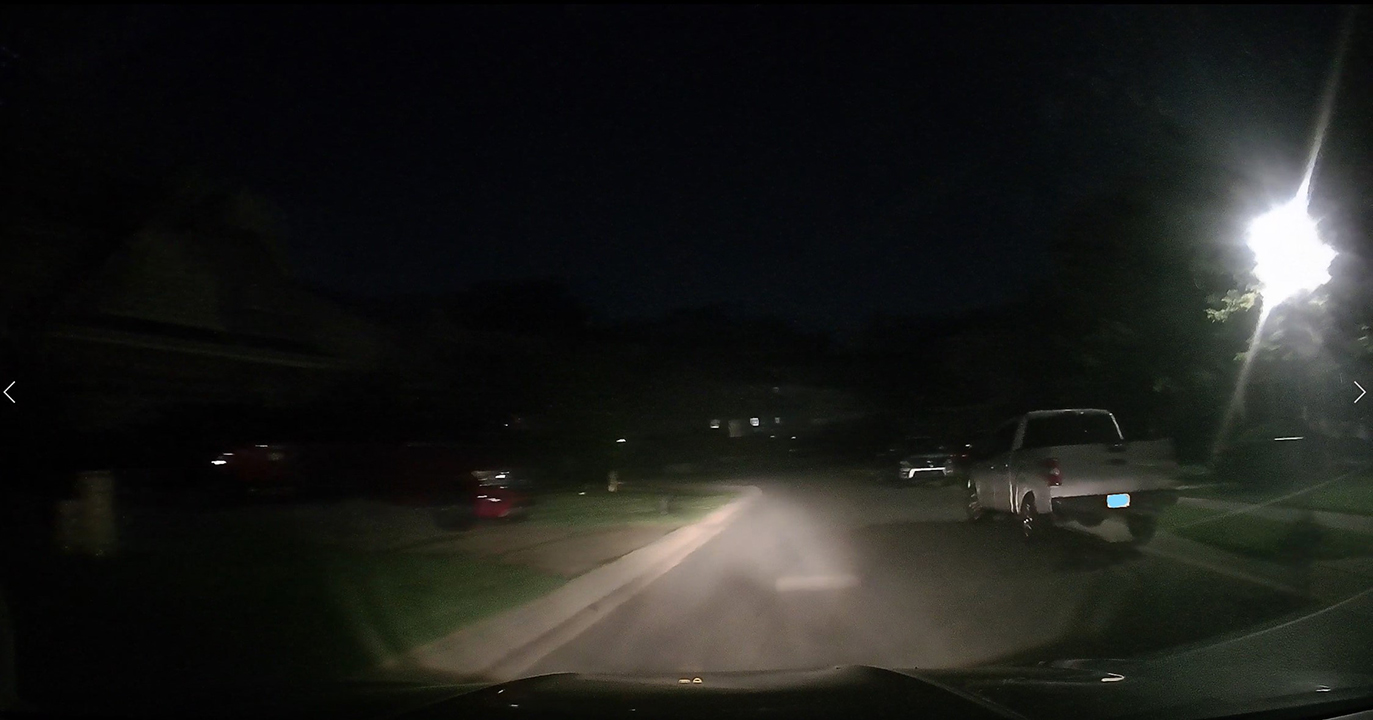 Nighttime recording quality with the Kingslim is not as high. In our driving recorder tests, it was difficult to decipher license plate numbers even on the higher-resolution front camera. The rear camera has especially grainy footage.

That said, we recorded in a dark neighborhood with no city lights. Few dash cams at this price point will perform much better at night. Still, if night recording is an important feature for you and you live in a rural area, you might want to consider a camera with super night vision or an infrared dash cam, such as the VanTrue N2S.

UI is where the Kingslim excels, and it’s a feature that makes it a good dash cam for new users. The Kingslim D4 comes with an intuitive touchscreen interface where you can control several settings. These include video resolution, event detection sensitivity, and loop recording time.

You can also use the camera for video playback to review footage before transferring it to a phone or computer.

In addition to recording video data, the Kingslim is equipped with a built-in Wi-Fi GPS device that can record the exact location of any incident. An accelerometer records driving speed, which may be helpful for insurance purposes.

Like many dash cameras, the Kingslim has a motion detection parking mode that automatically starts recording if something hits your vehicle while it’s parked. You can adjust the sensitivity of this parking monitor, which worked well in our tests.

The Kingslim can connect to your phone via the RoadCam app. This app has a rating of 2 out of 5 on the Google Play store. While we managed to get the app working with no issues, several reviewers note slow speeds and express frustration that the app requires access to phone features unrelated to its use (such as location and calling).

What We Like About The Kingslim D4 Dash Camera

As mentioned, we like the Kingslim D4 because of its high recording quality, easy-to-use interface, and relatively low price point. The in-plane switching (IPS) touchscreen is a nice touch for a screen of this size and does add punch to the colors.

As we also noted earlier in this review, it is an excellent choice if you’re looking for an entry-level car dash cam or want a dash cam for insurance purposes. If you wish to spend as little as possible but also have an effective dash cam that records at a useful resolution, the Kingslim D4 warrants serious consideration.

What We Don’t Like About The Kingslim D4 Dash Camera

While the Kingslim boasts many good features, it does have a few drawbacks. Video recording at night – especially through the rear camera – is grainy. The Kingslim is solid for its price point but may not capture license plate numbers in the dark.

We also don’t care for the Kingslim’s mounting system. Adhesive mounts can become unglued in the heat, and the Kingslim mount does not allow for horizontal adjustment once attached.

The Kingslim D4 has an excellent reputation with customers. Eighty-three percent of reviewers award the Kingslim dash cam 4 stars or higher on Amazon.

Most positive Kingslim reviews mention the image quality, especially for the price.

“Nothing not to like about this camera. Picture is very clear, quality is good, and [the Kingslim D4 is] very easy to install. When you park, the camera still detects movement.”

Negative reviews often criticize the mounting system, which can come unglued in the heat. Several users also mention difficulty pairing the camera with their phones.

“Camera was easy to set up, but the window/dash mount for the camera started to come unglued in the heat just a week after using it.”

“I tried for about an hour . . . to get the RoadCam app and the dash cam to talk to each other, and they simply would not. It kept saying on my phone that the Wi-Fi is not available.”

Dashboard cameras are not illegal in any state in the United States. However, in some states, drivers are prohibited from mounting objects to their windshields because they’re considered driving distractions. If you live in one of these states, you’ll need to find a way to mount your dash cam on your dashboard.

What Should I Look For When Buying A Dash Cam?

When buying a dash cam, the key features to look for are video resolution and recording speed. To accurately capture details such as license plates, you should purchase a dash cam with at least 1080p front camera recording quality at 30 frames per second.

You should also consider how you want to mount your dash cam (on your windshield or dashboard, with suction or adhesive) and if you want rear visibility. Although a backup camera is not a common pairing when it comes to dash cameras for cars, some models, like the Kingslim, come with or support a second camera.

Our Take On The Kingslim D4 Dash Camera: 4.5 Stars

The Kingslim D4 4K dual dash cam offers excellent value for the $100 price range. Recording quality is crisp – especially during the day – and the rear dash cam helps capture everything around you while you drive. The mounting system could be better, and other cameras record better at night, but for the cost, the Kingslim D4 is hard to beat.

This product is likely worth purchasing if you want a low-cost car dash camera to record your drives for insurance purposes. The Kingslim D4 is also good for monitoring your vehicle while it’s parked. However, it’s probably best to go for a pricier dash cam if you want something with strong nighttime recording capabilities.

Each year, we test over 350 auto products on vehicles and in our testing lab. Our team of product testers thoroughly researches top products, unboxes and puts our hands on each component, and tests the items on real vehicles before making recommendations to readers.

We publish hundreds of product and service reviews to bring car enthusiasts detailed guides on automotive tools, detailing kits, car seats, pet products, and much more. For more information on our testing methodology and how we evaluate every product, check out our methodology page here.

To connect the Kingslim dash camera to your phone, you will need to install the RoadCam app. Follow the instructions on the app to pair the Kingslim D4 with your phone.

We believe the Kingslim D4 is one of the best dash cams for the price. At around $100, it includes a high recording rate and resolution, an easy-to-use interface, and both front and rear recording.

How do I activate WiFi on my Kingslim dash cam?

Kingslim advises customers to use the following steps to activate WiFi on their device:

Most dash cams will let you format a memory card in the settings menu or by hitting a certain button pattern on the device. Some may even let you do it via an app, as long as the app is compatible with iOS and Android devices.