The Chicco MyFit Harness + Booster car seat is designed to accommodate children from 25.0 to 100.0 pounds. This Chicco MyFit review takes a closer look at car seat quality and summarizes online reviews to help you decide if it’s a good choice for your little one.

In addition to analyzing and summarizing reviews online, our team conducted in-person testing to examine the quality of materials and ease of installation. We ultimately rated the MyFit highly and recommended it in our review of the best convertible car seats. 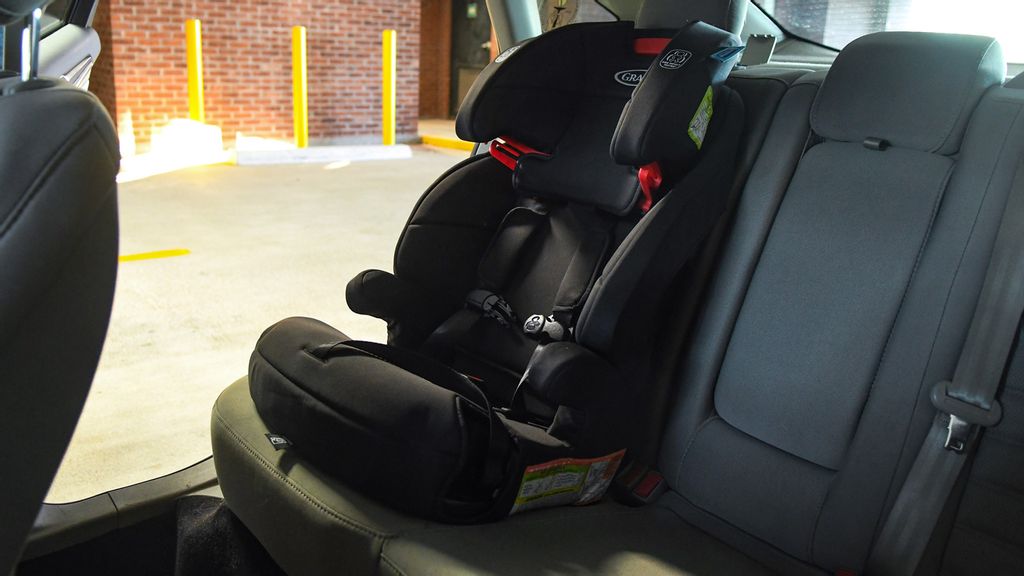 To test the Chicco MyFit, we installed this one car seat into a sedan. We inspected and adjusted all the straps and buckles to assess the quality of materials and ease of installation.

In addition to our in-person testing, our review team combed through hundreds of Chicco MyFit car seat reviews to get a sense of how others experienced the product. This gives us an idea of the seat’s longevity and how it works for various users.

Installing and adjusting the Chicco MyFit is no problem. The built-in bubble level indicators help ensure the perfect setup, and the explanatory stickers are easy to follow. This forward-facing car seat is similar to the Chicco KeyFit 30, except that it’s designed for older children.

At around $200, this seat also provides exceptional value. It’s built to transition from a toddler car seat to a backless booster mode and is suitable for children between 25.0 and 100.0 pounds. The padding is high quality, soft, and machine-washable. The five-point harness is easy to tighten and uses quality clasps for a secure fit. Several recline positions offer the perfect adjustment that won’t have your child’s head lolling forward.

This car seat is also safe. It includes two layers of EPS foam (DuoGuard™ Protection), and several parents say it saved their children in an accident.

There’s little not to like about the Chicco MyFit. We were hard-pressed to find any faults with the design, and few negative customer reviews exist. However, it seems that the cupholders are out of a child’s reach. Also, the seat is difficult to set up without using your car’s built-in seat anchors.

Virtually all cars manufactured after 1995 include seat anchors, but be sure your vehicle has these before purchasing this car seat. You can install this car seat using a vehicle seat belt, but the LATCH connectors are easier to use.

The Chicco MyFit has an average Amazon score of 4.9 out of 5. Of the more than 1,900 reviews, only two percent rate the product anything less than 4 stars. This makes the MyFit one of the most consistently-reviewed car seats on Amazon.

Positive Chicco MyFit reviews mention many of the same things we have, including that this seat is easy to use and install. It simply works well, and the five-position recline and nine-position headrest help ensure a comfortable fit.

“The padding around the headrest area is substantial without feeling like I’m strapping my son into a spaceship. He can see better out the windows of the car, thanks to the shape of the headrest ‘wings’ without compromising head and neck protection.”

“[My child] does seem to like the seat. It’s got a lot of padding so that buckles and things aren’t rubbing into him. The headrest is adjustable for his height, and it makes things comfortable for napping.”

More than one reviewer was using this car seat when they experienced a crash, and the MyFit’s side-impact protection and steel frame protected their most precious cargo – their child.

“The PT Cruiser hit us going 50 mph. My wife was in the passenger seat, our 4-year-old son was behind me. … Fortunately, his car seat saved him from very serious injury, and my wife and I only had minor neck injuries.”

“This car seat kept my daughter safe and alive [after an accident]. Needless to say, this one was replaced by the exact same model.”

As mentioned, only a handful of negative Chicco MyFit reviews are to be found. One person claims their seat was defective and didn’t properly tighten.

“Cleaned it and found the harness system appears to be broken, not staying tight. … We contacted Chicco by phone and email and have gotten zero response in the week.”

While defective models like this seem to be uncommon, it’s concerning that Chicco customer service didn’t contact this customer with a speedy resolution. A couple of other reviewers have noted that the seat is difficult to attach using the back seat shoulder belt (rather than the anchor latch system).

Our Take On Chicco MyFit: 4.7 Stars

The Chicco MyFit is an excellent choice for a convertible car seat. It can accomodate children from toddler-size until they are a big kid who doesn’t need a car seat, making it a good value at around $200. This seat is easy to install and features ErgoBoost triple foam padding that’s comfortable, soft, and safe.

Some users report difficulty securing the MyFit with the seatbelt (rather than the anchor latches), which could be an issue if you drive an older vehicle without anchors.

The Chicco MyFit is a safe car seat that meets all federal safety standards. Many reports are available online from customers who say this car seat protected their child in an accident. Before you purchase a car seat, make sure to check that there have not been any recalls for the product.

Of course, a seat is only safe if properly installed. It’s always a good idea to have someone inspect your car seat just to be sure. You can find the nearest inspection location using this tool on the National Highway Traffic Safety Administration (NHTSA) website.

The Chicco MyFit expires eight years after the date of manufacture. It can accommodate children from 25.0 to 100.0 pounds and up to 57.0 inches tall.

To convert the Chicco MyFit into a booster car seat, you’ll need to remove much of the padding and store the buckles and clips. Afterward, you’ll replace the padding and install the car seat. This video provides detailed, step-by-step instructions on the process.

Once assembled, the Chicco MyFit is 17.5 inches wide.

The Chicco MyFit Zip Air is a more deluxe version of the MyFit. Though it includes many of the same safety features, such as side-impact protection, it also includes better padding and adjustment mechanisms.

Included with the Zip Air (and not standard with the MyFit) are zip and wash fabrics, 3D air mesh, a kid storage compartment, and SuperCinch® LATCH tighteners.