The Vantrue N2S is a solid option for rideshare drivers and those in need of a high-quality dash cam to record at night.
By: Will Moore
07/26/2022 1:20 pm

The N2S model of the Vantrue dash cam is a solid option if you’re looking for a dash cam in the $200 to $250 range. You can purchase other quality dash cams, such as the Kingslim D4, for less, but these dash cams don’t have the night vision or interior cabin recording capabilities of the Vantrue.

In this detailed review, we’ll take a closer look at the Vantrue N2S. We’ve tested several of the best dash cams, and we believe the N2S Vantrue dash cam offers the best nighttime recording results. Read on to learn more about the setup process, specs, user interface, and recording quality of the Vantrue N2S.

The N2S Vantrue dash cam attaches to your car’s windshield via suction cup mount and features a built-in GPS and accelerometer that records driver speed. The camera can record at resolutions as high as 4K, like many of the best dash cams. Rather than a battery, the Vantrue is powered by a supercapacitor, which makes it better able to withstand high head.

The Vantrue’s standout features are its infrared night vision mode and interior-facing camera. The latter feature may be helpful if you’re working as a rideshare driver for a company such as Uber or Lyft.

*Price accurate at time of publication

Along with the camera itself, the Vantrue N2S dash cam includes:

As with most every dash cam, the N2S does not include a class 10 microSD card, which you need to record and save video. This kind of memory card must be purchased separately and typically costs between $15 and $20.

The Vantrue also doesn’t include any clips to help secure cables underneath your car’s upholstery. Twist ties work well for this, and you can tuck your cables without clips. Other dash cams sometimes include clips, which can make installation easier. You can purchase a Vantrue hardwire kit separately, allowing you to connect the dash cam directly to your vehicle’s battery power. 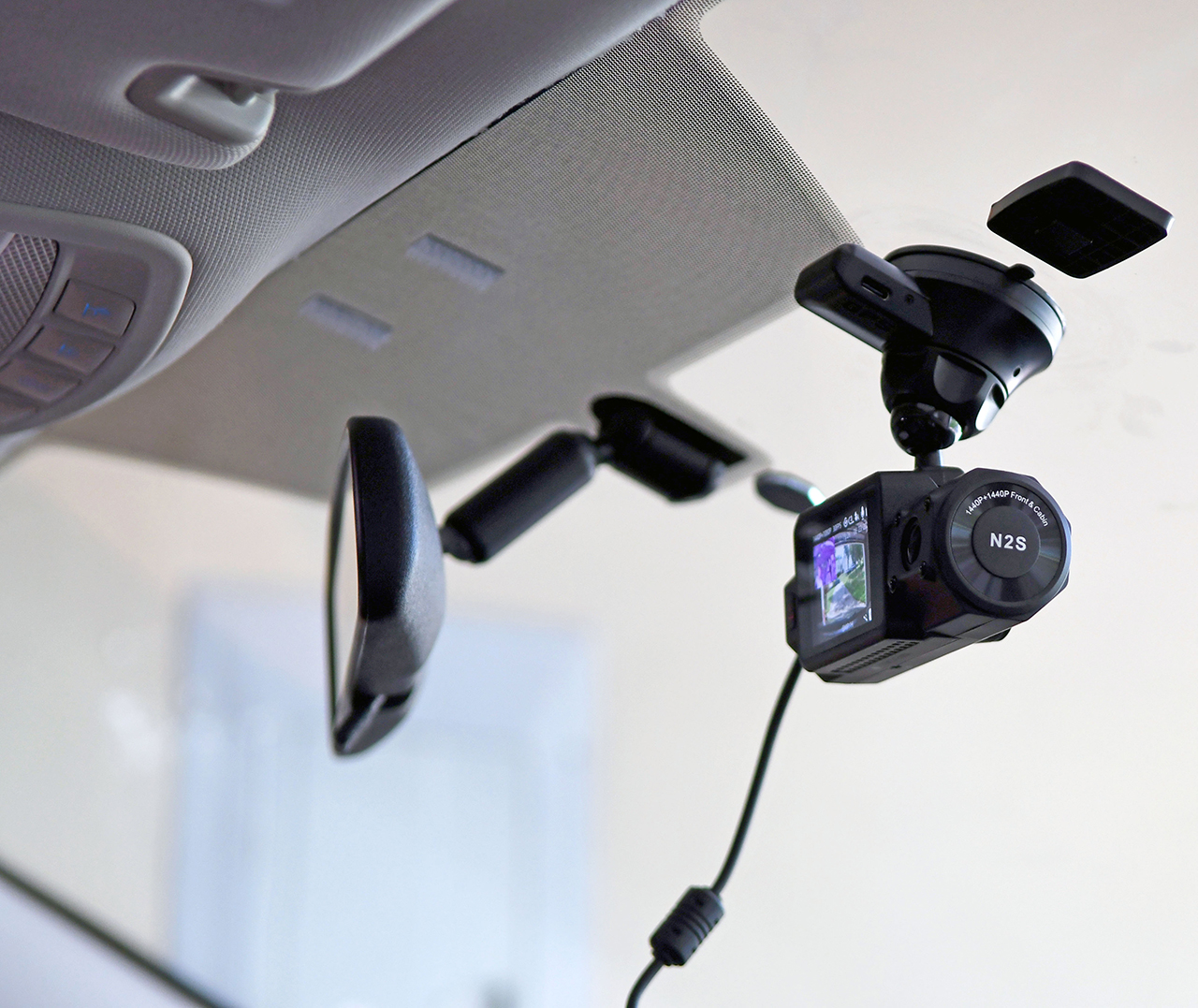 Our review team tested the Vantrue N2S by installing it in our test vehicle and using it during the daytime and nighttime. Throughout our testing process, we evaluated the camera’s performance in the following areas:

The Vantrue dash cam is very easy to install. Some dash cams attach via an adhesive, and others attach with a suction mount. We found the suction mount attachment to be the better method because it is easier to apply. Adhesive mounts can fall off after enough heat exposure. Once attached, the Vantrue suction mount offers full rotation, allowing users to aim the camera exactly where they desire.

To power the Vantrue dash cam, you’ll need to connect the camera to your car’s auxiliary power outlet. To keep the power cord out of your field of view, tuck the cables into your car’s upholstery. The included plastic crowbar can help you with this. This process takes some time and is easier if you use clips, which, as mentioned, are not included. 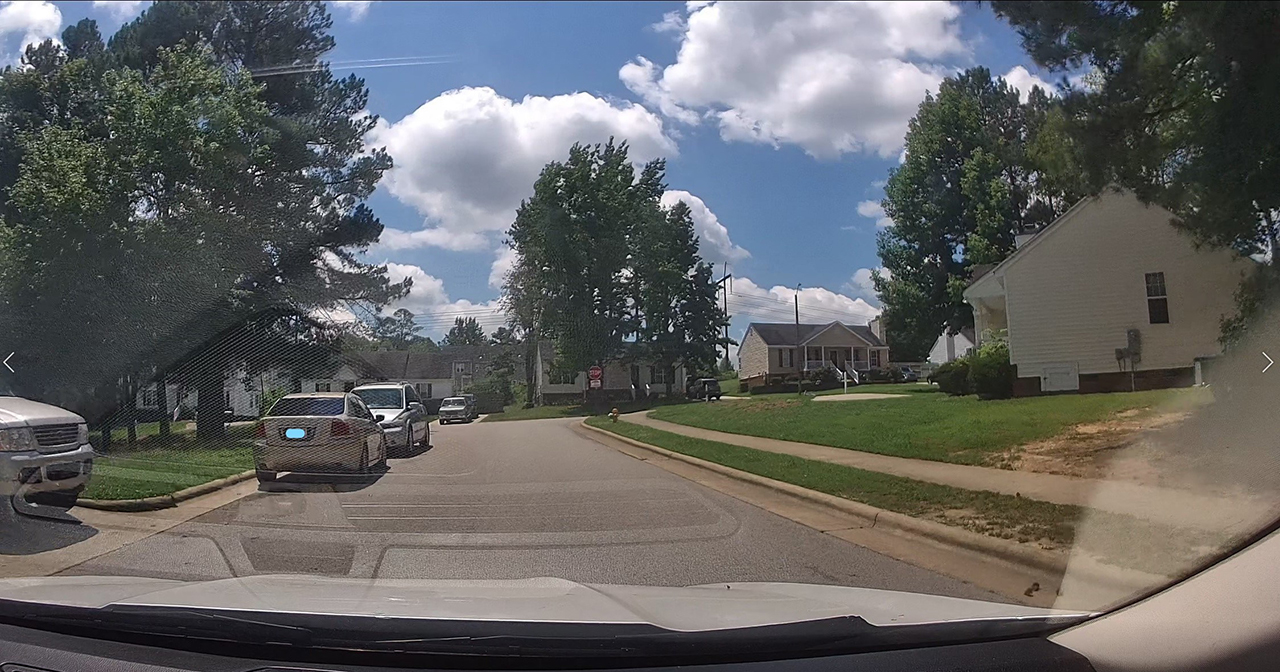 The Vantrue N2S is a 4k dash cam with excellent daytime recording quality. The wide field of view and high frame rate can capture important details, such as license plates. The camera’s LCD screen can help you see what it records and adjust the camera. 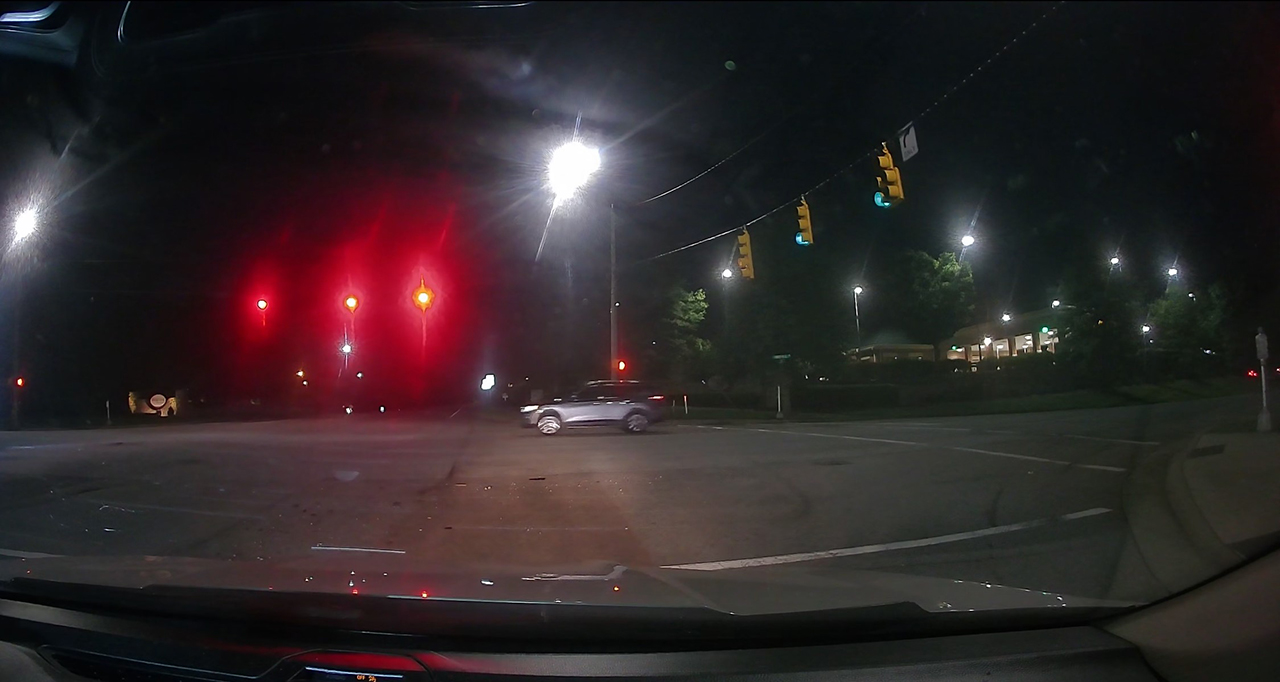 Nighttime recording sets the Vantrue dash cam apart from competitors. Many of the dash cams we tested didn’t perform as well at night. While the Vantrue’s image quality is sharper during the day, nighttime performance is high, especially compared to other dash cams.

The Vantrue dash cam also features an infrared night vision mode, which is especially useful for recording the cabin interior in the dark.

The Vantrue dash cam’s UI is not intuitive, and it doesn’t have a touch screen or voice command features. However, the number of functions is relatively small, so the interface is not too difficult to master after a brief learning period. Although the UI doesn’t require much learning, it’s not the sleekest we’ve encountered.

Users can adjust several features, such as recording resolution, exposure, loop recording duration, and the sensitivity of the impact and motion detection while the camera is in parking mode. Also, a time-lapse feature takes photos at set intervals.

Many dash cams include smartphone integration, but the Vantrue lacks the WiFi capabilities for this. To download footage, you’ll need to connect this camera to a PC with the USB-C cable that’s included.

Though it lacks smartphone connectivity, the Vantrue N2S has a couple uncommon features that some drivers – particularly rideshare drivers – may find especially useful. It’s a dual-channel dash cam with a rear camera that records what is happening in the cabin. Depending on how you position the Vantrue dash cam, it may even capture some events out of the back window.

Perhaps the best feature is the infrared night vision mode that enables low-light recording and may be vital if you often drive at night in places that aren’t well-lit.

All Vantrue cameras, including the N2S, include a 12-month limited warranty.

What We Like About The Vantrue N2S Dash Cam

Our favorite aspects of the VanTrue N2S dash cam are the high recording resolution (at least the front camera), wide-angle field of view, interior cabin recording, and nighttime recording resolution. This dash camera is a good option for rideshare drivers and anyone who regularly drives at night.

What We Don’t Like About The Vantrue N2S Dash Cam

While the N2S Vantrue dash cam is a solid purchase in the $200–$250 price range, it isn’t perfect. Because the car camera does not have an internal battery, it cannot record if it’s disconnected from your vehicle.

This may not be a significant drawback, but it could be inconvenient. It also means you need to keep your car on to access video playback.

If you want a dash cam that records in front of and behind your vehicle, the Kingslim is a better option. And if you want a camera to supplement your rearview mirror, we recommend learning about the best backup cameras on the market.

The Vantrue N2S has over 1,000 Amazon reviews, which give it an average rating of 4.3 out of 5. Eighty-four percent of users award the product 4 or 5 stars.

Positive reviews praise the Vantrue’s wide dynamic range (its ability to record in low-light situations). Many Vantrue dash cam owners are also impressed by the wide field of view and the interior-facing camera’s ability to capture events out of the back window.

“[The Vantrue N2S] manages to tone down the highlights to better produce a neutral exposure throughout the scene. You can see how [wide dynamic range (WDR)] works best when the sun is in front of the cam.”

The Vantrue dash cam has few negative reviews, but at least one person complains about a blinking red light that he found distracting while driving at night.

“There is a little red light that blinks on it. I understand this is to show that it’s recording, but there is no way to turn this off. During the day, it’s not an issue … but at night, it’s ridiculous. My eyes kept being drawn to the blink. Very distracting.”

Our Take On The Vantrue N2S Dash Cam: 4.1 Stars

The VanTrue N2S is an excellent dash cam option, especially for rideshare drivers. It features a wide field of view, high recording resolution, and excellent nighttime recording capability. The interior-facing camera and infrared night vision modes are valuable features in a dash cam.

If you’re looking for a cheaper dash cam option and don’t need a rear dash cam, you might consider the Garmin Dash Cam 56. It’s less expensive and features high recording resolution. However, it doesn’t have the nighttime recording resolution of the Vantrue or a cabin-facing camera.

We believe the Vantrue is a great dash cam because of its high recording resolution, especially at night. The interior-facing camera is a useful feature if you’re a rideshare driver.

Vantrue makes several dash cams at a variety of price points including the N1 Pro, Vantrue N4, Vantrue S1, and Vantrue X4S, along with single-front cameras and dual recording models. Many also use Sony sensors for improved nighttime performance.

A dash cam can record all night if configured that way. It is unlikely you will be able to record all night with the Vantrue N2 because it does not have an internal battery and will draw power from your car. Many dash cams feature an event-detection feature and will begin recording when they detect a disturbance to your vehicle.

The best dash cam to buy depends on your needs and your budget. In our review of the best dash cams, we recommend the Kingslim D4 dual dash cam as our best overall pick. But other brands – such as Garmin and Vantrue – offer certain advantages over the Kingslim and may be the better option for some drivers. Whatever your choice, be sure to find a camera with full HD recording.

After installing a Vantrue dash cam to your vehicle via a windshield mount, it draws power from the car’s cigarette lighter. Customers can select video settings from and other features in the dash cam menu.

Vantrue maintains a catalog of available firmware updates on its website. To update firmware, download the latest version from the manufacturer’s website. Then format your existing memory card that is compatible with the Vantrue dash cam. Finally, place the updated firmware in the appropriate folder within the memory card and power on your dash cam.

A common safety feature on Vantrue dash cams is the parking mode, which detects when an object approaches the vehicle. On some models, this mode activates whether or not the vehicle is running.