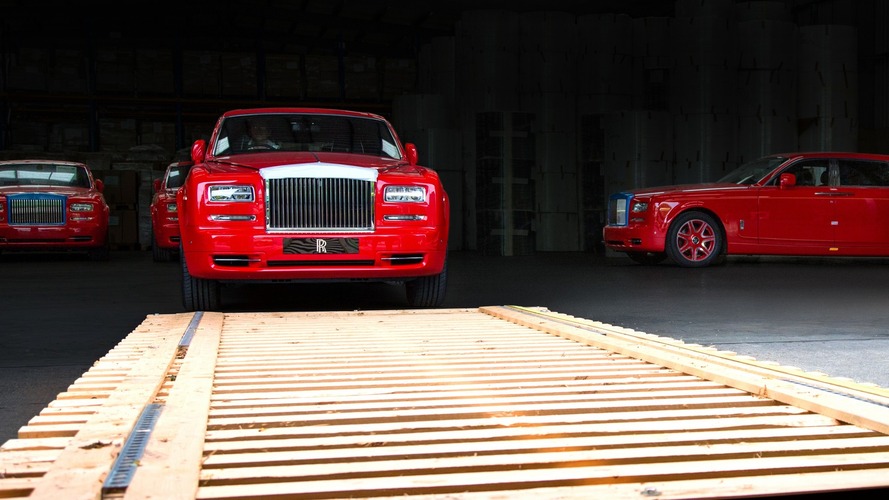 Cha-ching goes the cash register in Goodwood following the delivery of all 30 Phantoms commissioned by a single client.

About two years ago, entrepreneur Stephen Hung placed an order for no less than 30 Rolls-Royce Phantoms in the Extended Wheelbase guise destined to be used by The 13 hotel in Macau. Following the handover of the first Phantom earlier this year at the Geneva Motor Show, the joint chairman of The 13 holdings has now taken delivery of the other 29 cars.

According to an article from The Guardian, Hung spent no less than $20 million for the 30-car fleet, which eclipses the 14 Phantoms purchased back in 2006 by Hong Kong's Peninsula hotel. The new cars have a predominantly red theme, but two of them feature gold accents applied onto the Spirit of Ecstasy, front grille, and inside the lavish cabin. To stand out even more, these two special cars have a diamond-encrusted Rolls-Royce badge, while the bespoke Stephen Red body finish has received fine particles of pure gold to boost the opulence of these two particular units.

Speaking of opulence,The Guardian says these two “Gold” cars are actually the most expensive Phantoms ever commissioned. Both are going to be reserved for select guests once “The 13” hotel in Macau will open its doors early next year for wealthy customers. How wealthy? A night at the 22-story hotel will cost as much as $130,000, according to The Wall Street Journal.

Getting back to the cars, their hand-painted bodies are complemented by a set of unique 21-inch wheels featuring a similar “Stephen Red” color created “to the exact requirements of Mr. Hung.” A hand-painted gold twin coach line with “The 13” motif has also been added, while the interior cabin carries over the hotel’s theme with a chequered pattern and special wood staining similar to the “Stephen Red” color. As a final touch, the Phantoms have been fitted with a new watch created by Rolls-Royce in collaboration with master jeweler Graff.

To refresh your memory, production of the Phantom VII will come to an end in the following months. The last 50 units are part of the Zenith Collection and all of them have already been sold. An all-new Phantom with an aluminum-intensive construction has already been caught on camera and is due to go on sale in 2018. The end of that year will also see the introduction of Rolls-Royce’s very first SUV codenamed "Cullinan." It's bound to go up against another luxo-barge, the controversial Bentley Bentayga.

Following the handover of the first of his highly Bespoke Rolls-Royce Phantoms at the 2016 Geneva International Motor Show in March of this year, all 30 Phantoms commissioned by luxury entrepreneur Stephen Hung, Joint Chairman of The 13 holdings limited, have now been shipped from the Home of Rolls-Royce in Goodwood, England. The fleet of 30 extraordinary Bespoke Phantoms, that represent the largest single commission in Rolls-Royce history, are destined for The 13 hotel in Macau, planned to open in early 2017.

Crafted in close collaboration with Mr Hung, the fleet comprises 30 Extended Wheelbase Phantoms in the livery of The 13 hotel, two of which are ‘Gold’.

The livery applied to each of The 13 Phantoms comprises a specially formulated ‘Stephen Red’ exterior paint developed to the exacting requirements of Mr Hung, complemented by a hand-painted gold twin coach line that culminates in a specially designed The 13 motif. The Bespoke 21” wheels are also finished in ‘Stephen Red’.

Included in the fleet are two ‘Gold’ Phantoms, which will be reserved for use by select guests, each featuring a gold Spirit of Ecstasy, gold Pantheon grille, gold interior accents and diamond encrusted Rolls-Royce badge. Additionally, the ‘Stephen Red’ paint that is used for the ‘Gold’ Phantoms is infused with fine particles of pure gold.

The stunning exterior theme of the fleet is elegantly echoed in an exquisitely crafted interior. A specially developed wood staining technique evokes the ‘Stephen Red’ colour scheme, whilst a chequered pattern integrated to the rear seats echo the marble entrance hall motif of The 13. The clock was designed in collaboration with master jeweller Graff.