2017 Suzuki S-Cross gets a serious facelift

For the 2017 model year, Suzuki is giving its S-Cross SUV a much-needed upgrade.

Four years on the market has proven fruitful for Suzuki and its unique ‘C’ segment S-Cross SUV. And in preparation for the launch of its revised version on October 17th, the stout Suzuki will be getting a fresh new face, and an even fresher set of engine options to go along with it.

A bold new look, Suzuki hopes, will separate the S-Cross from the current crop of ‘C’ segment SUVs. The grille has been given a more prominent distinction, and is lined in chrome (plastic) fixtures. The headlights are now more distinguishable with LED fitments (in SZ-T trim), and the taillights follow suite with standard LED bulbs. To top it all off, a more rugged black plastic diffuser pairs well to the newly-adjusted ride height - which has been raised from 165 millimeters (6.5 inches) in the outgoing model, to 180 millimeters (7.0 inches).

On the inside, an updated dashboard and trim brings the S-Cross into the 21st century with soft-touch materials and framing highlights for the center control panel. New fabric has also been added to the seats (in SZ4 and SZ-T trims), as has a double sliding panoramic glass sunroof - one of the largest in the segment. 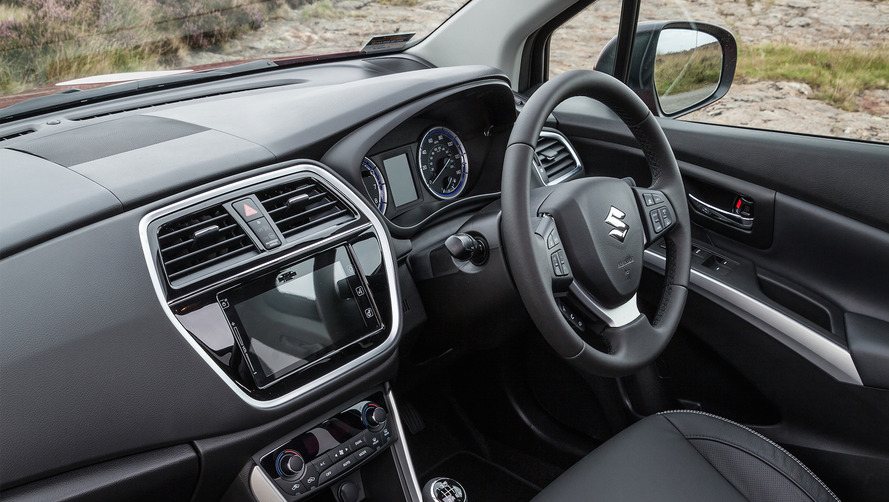 From inside the cabin to under the hood, the S-Cross follows in the successful footsteps of the Vitara S and Baleno, being the third vehicle in the lineup to receive a range of Boosterjet engine options. The base 1.0-liter turbocharged engine delivers 111 horsepower (82 kilowatts) and 125 pound-feet (170 newton-meter) of torque. Move up trim, and the 1.4-liter Boosterjet engine produces 138 horsepower (102 kilowatts) and 162 pound-feet (220 newton-meter) of torque.

But arguably the most desirable option of all comes in the form of a 1.6-liter diesel. With 236 pound-feet (320 newton-meter) of torque, the diesel option is the most spirited in terms of standstill performance - on or off road. All three pair directly with a four-mode AllGrip system that allows the S-Cross to traverse, gravel, rock, and/or mud.

The distinctive new interior design utilises an updated soft-touch dashboard pad, framing highlights for the centre panel and newly designed seat fabric for SZ4 and SZ-T models. S-Cross offers ample room for five occupants with their luggage and the double sliding panoramic glass sunroof fitted as standard on the SZ5 model has one of the largest opening areas in its category (560mm).

The highly acclaimed Boosterjet engines first utilised in the Vitara S and Baleno models are also now available to demonstrate Suzuki once again as a true expert in the field of fun to drive crossover and four wheel drive cars.

CO2 emissions are low at just 113g/km for the 1.0-litre 2WD model and 119g/km with optional automatic transmission. The DDiS 2WD model achieves even lower CO2 emissions of 106g/km that result in an annual VED charge of just £20.

Suzuki’s Boosterjet petrol engine technology was first utilised in Vitara as a 1.4-litre unit earlier in 2016 and the 1.0-litre version followed several months later in Baleno.  After the debut of the three cylinder Boosterjet 1.0-litre unit this engine technology now continues for the Facelift S-Cross. Offering the same level of power and torque of a much larger capacity normally aspirated engine (1.8-litre), it delivers an effortless drive and genuine driving pleasure.

Historically, power and torque delivery from a turbocharged engine would not have been available until much higher engine speeds, offering less flexibility to the driver.

This unit has an output of 111PS and is also Direct Injection turbocharged (DITC). The engine has very compact dimensions and offers 170Nm of torque available from 2,000rpm through to 3,500rpm. The 1.0-litre engine offers nine per cent more torque than the outgoing 1.6-litre petrol together with 11 per cent lower CO2 emissions and 10 per cent improved combined fuel consumption.

The 1.4-litre Boosterjet engine has a power output of 140PS and offers 220Nm of torque available from just 1,500rpm which is 41 per cent more than the outgoing 1.6-litre engine.

The 1.4-litre engine offers strong benefits in performance too with a 0-62mph acceleration time of 10.2 seconds for both manual and automatic transmissions and a maximum speed (where permitted) of 124mph.

The 1.6-litre DDiS engine has a torque output of 320Nm from just 1,750rpm and uses a variable geometry turbocharger (VGT). The VGT gives optimal forced induction by controlling the flow of exhaust gases in accordance with the engine speed, thereby helping to achieve high torque, low fuel consumption and low particulate emissions.

An Engine Auto Stop Start system is used on all S-Cross models which shuts down the engine when stationary.

Suzuki evolved its renowned four wheel drive technologies into a new generation that delivers driving pleasure and peace of mind in diverse conditions while promoting economy and limiting the burden four wheel drive cars place on the environment.

Suzuki’s ALLGRIP system is available on SZ-T and SZ5 models. It has four driver-selectable modes for safe, enjoyable driving on diverse surfaces. It debuted in the S-Cross model at first launch and has proved very successful in both this model and Vitara. In development, the ALLGRIP system was enhanced by the addition of a feed forward function that allocates torque to the rear wheels before any slippage can occur.

Four-wheel drive is typically seen as detrimental to fuel economy and emissions performance. By contrast, Suzuki’s ALLGRIP system enables CO2 emissions that are remarkably low for a four-wheel drive SUV. CO2emissions for the new 1.0-litre Boosterjet petrol engine with manual transmission is just 119g/km for the 1.0-litre and 127g/km for the 1.4-litre. The optional automatic transmission equipped 1.4-litre model is only one gram higher. The S-Cross with 1.6-litre DDiS engine and ALLGRIP has a figure of 114g/km.

The facelift S-Cross goes on sale on 17th October with full year sales projection in 2017 of around 5,000 units. Road Test vehicles are available via the press office from late October.