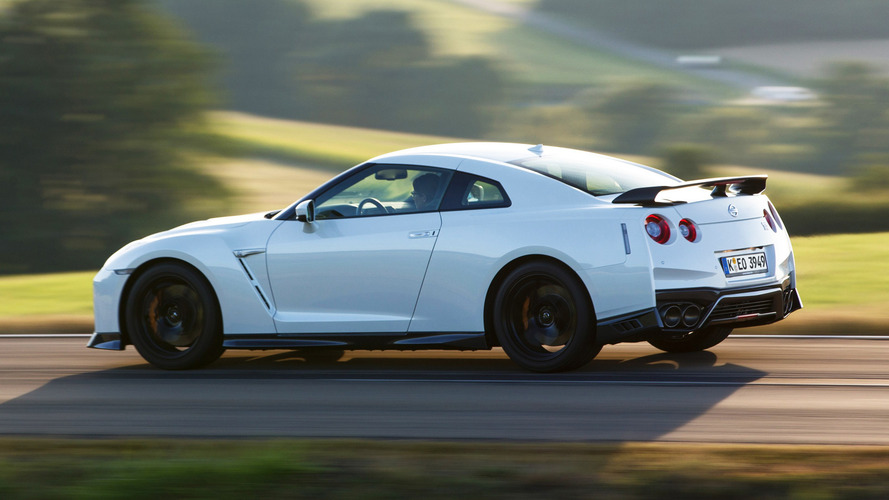 Going on sale in November, the model is positioned below the flagship GT-R Nismo.

Nissan is expanding its portfolio of sports models with the introduction of the track-focused GT-R Track Edition for the United Kingdom. The vehicle is positioned above the current Premium, Prestige, and Black Edition trim levels, but below the flagship GT-R Nismo.

Engineers from the Nismo division have retuned many aspects of the standard GT-R, including the suspension and the steering. A new lightweight anti-roll bar has also been installed to increase body stiffness and reduce weight.

Specifically engineered for "thrill-seeking track enthusiasts," the GT-R Track Edition rides on 20-inch aluminum wheels, hiding under a wider front bumper. Customers in the United Kingdom are also receiving a carbon spoiler as standard, as well as black and red Recaro seats sourced from the GT-R Black Edition. A unique Track Edition badge made from carbon is attached to the dashboard.

In addition, the interior comes nicely equipped with the latest version of Nissan’s infotainment system with eight-inch display and an 11-speaker Bose audio unit.

Based on the 2017 model year GT-R, first unveiled at the New York Auto Show in April, the Track Edition it motivated by a 3.8-liter V6 biturbo engine, delivering 570 horsepower (419 kilowatts) and 470 pound-feet (637 Newton meters) of torque. The unit is mated to a six-speed automatic gearbox with two clutches, sending power to all four wheels.

Nissan explains each engine is hand-assembled from start to finish by a “single, meticulously trained, technician called a Takumi - literally ‘master craftsman’ in Japanese.”

Speaking of the GT-R Nismo, it has slightly more power at 600 horsepower (441 kilowatts) and 481 pound-feet (651 Newton meters) of torque, coming from the same 3.8-liter engine.

Another eagerly anticipated chapter in the Nissan GT-R success story has begun, with the arrival of the GT-R Track Edition.

As the name implies, it’s been specifically engineered for thrill-seeking track enthusiasts by the dedicated team at NISMO – Nissan’s motorsport division. Designed to deliver a higher level of performance than the standard GT-R, it is priced from £91,995.

The Nissan GT-R Track Edition sits above the Premium, Prestige and Black Edition in the model line-up, but below the flagship GT-R NISMO.

Performance modifications to further improve the dynamic experience include bespoke Bilstein Damptronic® suspension. A race-tuned set-up, this is designed to optimise straight-line and cornering stability. A new lightweight anti-roll bar has also been added to increase body stiffness and reduce weight.

NISMO Racing Black forged 20-inch aluminium wheels and tyres are part of the GT-R Track Edition package, in addition to a wider front bumper. However, the exact specification varies by market. For example, Track Edition cars in Germany come with carbon-backed Recaro seats as standard, with a carbon rear spoiler available as an option.

In the UK, the black and red Recaro seats from the GT-R Black Edition are fitted, while the carbon spoiler is standard. A boot lid made from carbon and the carbon-backed seats are optional extras.

What is included on every version is the finishing touch – a unique Track Edition badge made from carbon that’s attached to the dashboard. Customers will start to take to delivery of cars from early November.

The GT-R Track Edition is based on the MY17 GT-R, first unveiled at the New York Motor Show in April 2016. Building on the GT-R’s unrivalled supercar heritage, the four-wheel-drive super-coupé features a striking new aerodynamic exterior design.

Power comes from a 3.8-litre twin-turbo V6 developing 570PS and 637Nm of torque. Each engine is hand-assembled from start to finish by a single, meticulously trained, technician called a Takumi - literally ‘master craftsman’ in Japanese.

Since its launch in 2007, the Nissan GT-R has been at the cutting edge of the premium sports car sector – an uncompromising performance four-seater for enthusiastic drivers, a car which completely embodies Nissan’s brand sign-off – Innovation that Excites.