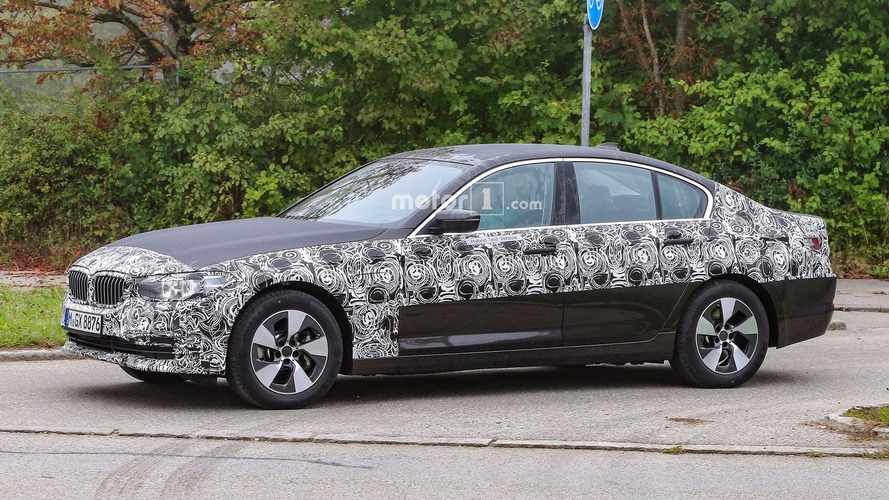 The next-gen 5 Series is inching closer to a full reveal, so BMW was kind enough to remove some of the camo from these test vehicles.

Spotted here in sedan and estate guises, the all-new BMW 5 Series is showing a bit more of its production-ready metal featuring a design very familiar when compared to the outgoing model. The left-hand-rive sedan (G30) with bi-color wheels is the more interesting of the two prototypes due to its plug-in hybrid arrangement denoted by the fuel cap on the left-front fender and the “Hybrid Test Vehicle” lettering on the driver's door and on the rear bumper.

The sedan was likely equipped with a powertrain adapted from the 330e and X5 xDrive40e where a turbocharged 2.0-liter gasoline engine works together with an electric motor housed inside the eight-speed automatic transmission. BMW will probably install the lithium-ion battery pack underneath the trunk’s floor and word has it the cells will provide the midsize sedan with an EV range in excess of 20 miles (32 km). That doesn’t sound overly impressive, but at least it’s a tad better than the 14-mile rating of the 330e and the X5 xDrive40e.

Overall efficiency regardless of engine choice will be significantly boosted compared to the outgoing model if we take into account the switch to BMW’s CLAR platform will bring a confirmed weight loss of up to 100 kilograms (220 pounds).

As far as the other prototype is concerned, it’s a conventionally-powered Touring (G31) in right-hand-drive specification carrying slightly more camouflage than the sedan in order to conceal its modified rear end. The alloy wheels certainly wouldn’t be our pick since those are just too small for a car of this size and at the same time these cheapen the Touring’s otherwise posh appearance.

The next-gen 5 Series will borrow some of the technology from its bigger brother, the 7 Series, including a bunch of semi-autonomous driving systems. Some of these have already been previewed in a teaser released by BMW earlier this month, showing the Steering and Lane Control Assistant and the Crossroads Warning system. Owners will also be able to check out a bird’s-eye view of their prized possession thanks to a Remote View 3D app providing footage from the vehicle’s multitude of cameras.

As to when we’ll actually get to see the car, chances are the 5 Series sedan will be revealed in full either next month or in November prior to showing up in Detroit in January 2017. The more practical Touring is expected to receive its proper debut two months later at the Geneva Motor Show in March. Further down the line, the controversial 5 Series GT might make an appearance in about a year from now at the Frankfurt Motor Show. Spy photos of the Gran Turismo have shown the rear end won’t be as odd as it is now, so there is some hope the model will have a more appealing design.