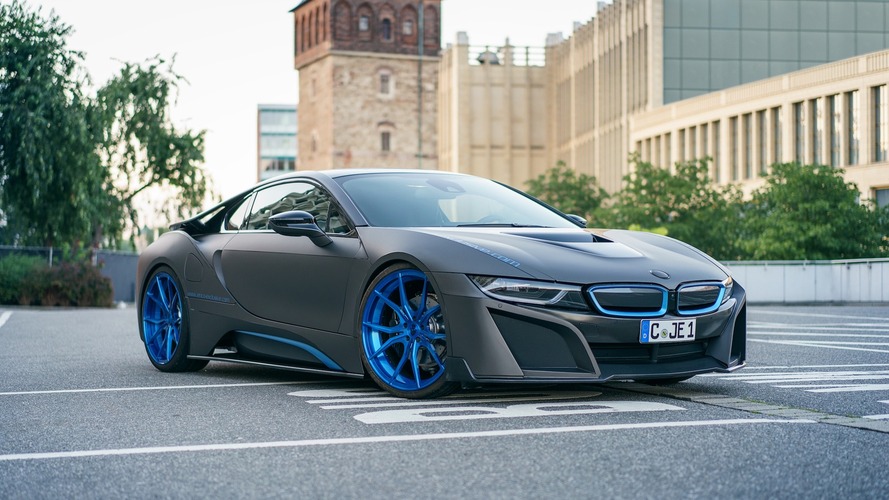 Better, and yet, also worse.

Part of what makes the BMW i8 look so radically futuristic is its tri-color exterior. The one we recently reviewed, for example, combines white, black, and blue tones in a very interesting way. But what happens when you take the metallic finish away and just paint the whole thing matte gray? That's what German Special Customs did. Among other things.

This isn't the first time we've seen GSC's work, and not the company's first take on the i8, either. Admittedly, this one looks way better than the iTron from 2014, and if you take away the weird blue wheels, this new i8 actually looks kind of cool.

"When the production BMW i8 Plug-in Hybrid was presented at the IAA 2013, onlookers were surprised at how little its design had altered from the BMW Vision EfficientDynamics concept car shown four years earlier," GSC says in its press release. Of course, we're not sure that's actually true, but if you're one of those people who has apparently been complaining about the i8 not being more aggressive, the GSC treatment should do the trick. The revised front fascia has more prominent air intakes, and the ride height is lower than the stock car. Of course, there are also those shiny blue metallic wheels that, uh, sure do make a statement.

Interior tweaks are few and far between. The leather seats are now black, and there's blue Alcantara trim found throughout. It's not super gaudy or anything – if you like the existing i8 interior, you'll like this one just as well.

German Special Customs doesn't say anything about any performance updates, though the lower ride height and larger wheels/tires surely affect handling a bit. Even so, the i8 isn't exactly a slowpoke, and the more aggressive rubber and stance might make it drive a bit more like a sports car than just a quick hybrid.

See the one-off i8 in the gallery below, and scroll beyond that for GSC's press blast.

Hybrid Bodybuilding: German Special Customs styling for the BMW i8

When the production BMW i8 Plug-in Hybrid was presented at the IAA 2013, onlookers were surprised at how little its design had altered from the BMW Vision EfficientDynamics concept car shown four years earlier.

Now, tuning specialists, German Special Customs (GSC) from Chemnitz have set about giving the most technically advanced sports car of our times a visual makeover for an even more purposeful and masculine appearance.

As the BMW twin grilles on this Plug-in Hybrid are merely symbolic, they set the stage for the imitation air intakes on the bespoke GSC front spoiler. Made from carbon-fibre to match the rest of the car, this aggressive new ‘face’ weighs just 2.8 kg and gives the i8 significantly enhanced overtaking presence. Integrated side skirts continue the carbon-fibre tuning fest, while the roof and roof spars receive a glossy carbon-fibre finish.

Project partner, handWERK-folien, then wrapped the sleek bodywork in matt grey foil with light blue accents, while the wheel arches are filled by 8.0x22 and 9.0x22-inch two-piece COR International rims, painted metallic cool blue. Together with H&R sport springs that lower the ride height, these larger wheels and tyres give the GSC i8 its more menacing stance and improved handling.

To complement the its futuristic exterior, German Special Customs had their craftsmen re-trim the i8’s equally avant-garde cabin in blue and black leather and Alcantara with carbon-fibre trim inserts.