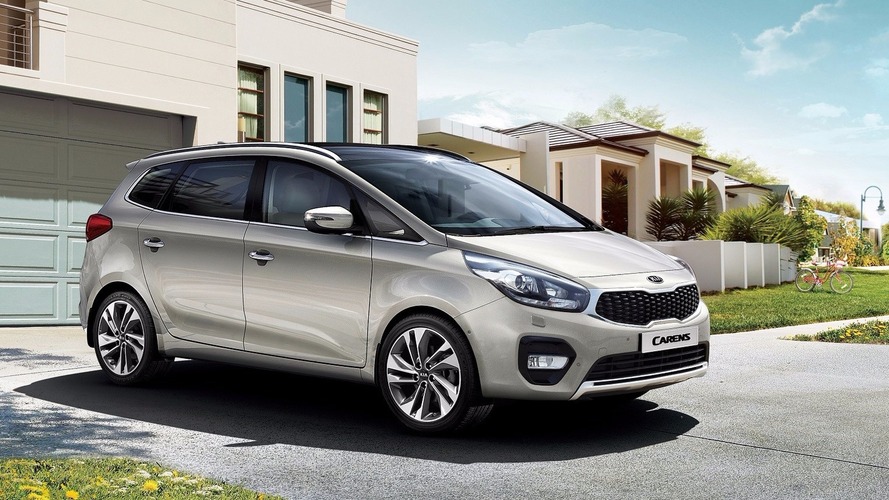 Kia has given its small minivan a light, mid-life refresh. The facelifted Carens goes on sale in Europe towards the end of this year.

A number of minor styling alterations have been made to the updated car. The front end features a new bumper, fog lights, and ‘tiger nose’ grille, giving what Kia describes as “a more sculptural look". The rear bumper is new, as well, along with the rear lamp units which feature a new lighting signature.

A new color choice, Mysterious Blue, and three designs of 16-, 17-, and 18-inch alloy wheel have been added to the options list, too.

The seven-seat interior, meanwhile, is available with knit cloth or diamond pattern leather upholstery, in black or beige. Depending on the model, metallic, gloss black, or carbon effect trim inserts are dotted about the place.

The Carens has also been updated with Kia’s latest infotainment system. It comes with a 7.0- or 8.0-inch touchscreen and is compatible with both Android Auto and Apple CarPlay. Top-spec versions include satellite navigation, Kia Connected Services, and a rear-view camera. An optional JBL stereo with a separate amplifier, subwoofer, and six speakers pumps out the tunes.

In Europe, the Carens is available with a 1.6-liter, 136 horsepower (101 kilowatts) GDi gasoline engine, or a 1.7-liter CRDi diesel with 115 hp (86 kW), or 136 hp (101 kW). The low-power diesel can now be had with an Eco Pack that includes a stop-start system, low rolling-resistance Michelin tires, and revised gear ratios for improved fuel economy and carbon dioxide emissions. A 2.0-liter diesel engine is available elsewhere in the world.

The previous-generation of Carens was sold in the United States under the name Rondo between 2006 and 2013.

The popularity of minivans is waning in Europe as families increasingly turn to crossovers. But the Carens is a consistent if modest sales performer for Kia. During the first half of 2016, the Korean manufacturer sold more cars than in any other six-month period in its history.