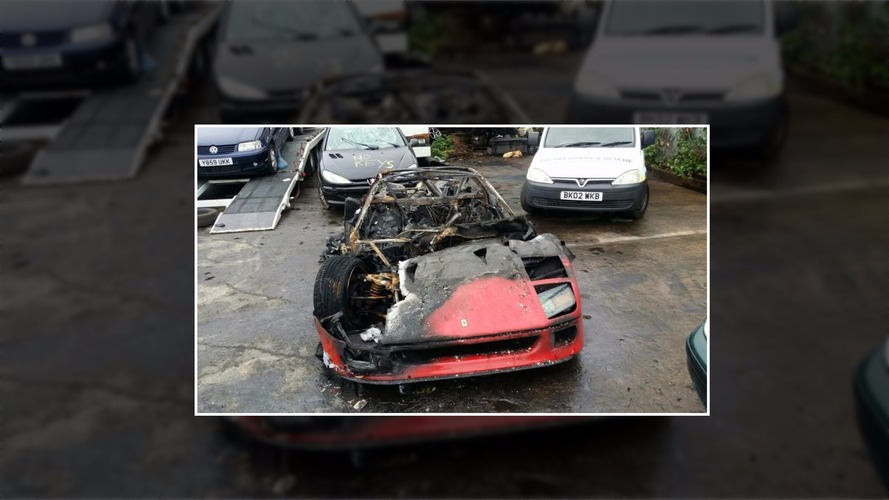 The owner must be absolutely heartbroken.

Heartbreaking images have emerged on-line of a Ferrari F40 that has been completely destroyed by fire just after a full restoration was completed.

The images were posted on Motor1’s sister website Ferrari Chat by forum member Paul500. They show the wreck at a recovery yard, somewhere in the United Kingdom. The circumstances surrounding the fire are not known at the moment, but according to the poster the F40 was on its maiden drive after undergoing a full restoration. Hopefully the occupants managed to escape unscathed.

As you can see, no part of the car was untouched by the fire. Except, perhaps, the rubber lip under the front bumper. If it is UK registered it will likely be declared a Category A write-off, meaning any salvageable parts can be stripped but the chassis has to be crushed. Not that a rebuild would be economically viable anyway, even with F40 values as high as they are.

Seeing an F40 burn to the ground like this is a rare occurrence, but not unprecedented. According to another forum member, Frefan, both the rubber fuel bladders and ignition coils are known weak spots.

The F40 hit the headlines when it was launched in 1987 as Ferrari claimed a top speed of 202.6 miles-per-hour (326.1 kilometers-per-hour), making it the first series-production car to break the 200 mph barrier. That astonishing turn of speed came courtesy of a growling, howling 2.8-liter, twin-turbo V8 engine producing 471 horsepower (352 kilowatts). And with its pioneering all-carbon fiber body, it tipped the scales at just 3018 pounds (1369 kilograms).

It has since taken on a certain poignancy as well, being the last car signed off by Enzo Ferrari himself. And many enthusiasts regard it as one of the last cars to be built almost entirely without compromise, unencumbered by safety regulations and driver aids. Small wonder it’s perhaps the most highly prized post-Daytona Ferrari, with values now firmly in the million-dollar bracket.