Fastest Honda ever goes over 260 mph on Bonneville salt flats

The Honda S-Dream managed 261.875 mph with a turbocharged three-cylinder engine for power.

To reach over 260 miles per hour (418.4 kilometers per hour), hypercars like the Hennessey Venom GT and Bugatti Veyron Super Sport require massive engines that churn out well over 1,000 horsepower. However, the incredibly aerodynamic Honda S-Dream just set an FIA class record on the Bonneville Salt Flats by reaching nearly 262 mph (418.4 kph) in a vehicle with a 660-cubic-centimeter turbocharged three cylinder.

Officially, the S-Dream managed new records of 261.875 mph (421.45 kph) over a mile and 261.966 mph (421.59 kph) over a kilometer. Those speeds also make the swoopy vehicle the fastest road-going Honda ever. You would need a HondaJet to achieve higher speeds in the brand's products. One run even reached 266 mph (428.1 kph), but the car wasn't able to repeat the performance going the other way, so it didn't count as a record.

Sixteen members from Honda's engineering team in Japan started working on the Bonneville Speed Challenge in 2015. Their goal was to set a land speed record using an engine out of a Honda S660 roadster with just 64 hp in stock form. To achieve the milestones, the crew had to overhaul the powerplant including replacing the lower portion of the engine block with a steel version. Honda doesn't give away the mill's exact output but confirm it's over three times more than from the factory. That means the little three-cylinder is making around 200 hp. 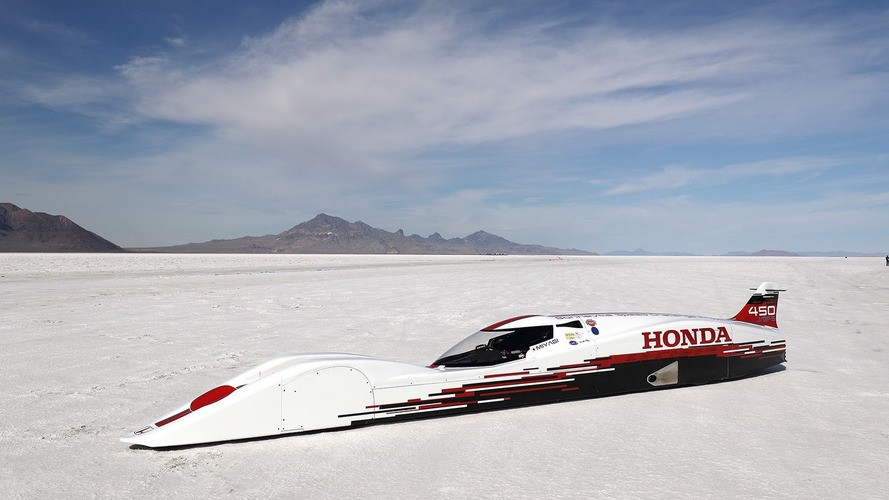 The S-Dream performed flawlessly during test runs in Japan, but the driver discovered the lack of landmarks on the salt flats made it difficult to keep the vehicle pointed straight down the course. The team then visited Honda Performance Development in California, and they reshaped the canopy for better visibility. However, the vehicle wasn't able to set a record during the famous Bonneville Speed Week.

The crew eventually got another opportunity to run down the salt, and the S-Dream managed a record-setting 227.776-mph run on the first day. The speeds only increased from there.

Honda R&D Japan-led effort sets FIA Class record of 261.875 mph
Fastest speed ever recorded for a Honda vehicle
Volunteer team surpasses previous mark set by Honda F1 car
Sep 21, 2016 - TORRANCE, California  -- Honda products have won dozens of motorsports championships throughout the world, dominating competition at legendary venues from Indianapolis to Monaco, and on surfaces ranging from the sands of Dakar to the dirt of Carlsbad.

But this past week, an intrepid group of young Honda engineers took to the salt flats of Bonneville, Utah to post the fastest speed ever recorded for a Honda vehicle.

Not only did the Honda engineers post a new FIA World Record of 261.875mph(1mile), 261.966mph(1km) for a vehicle in its class (Category-A Group-1 Class-4), it posted a speed faster than any Honda-powered car ever including the record established by BAR Honda F1 car at Bonneville in 2006, by using a 660cc engine based on the three-cylinder powerplant designed for the Honda S660 sports car.

The project "Bonneville Speed Challenge" was internally announced at Honda R&D in Japan in 2015 and 16 members were chosen from a pool of 100 volunteers, including the project leader Keisuke Tsuta, to build the car that would be known as the Honda S-Dream. The goal of the project was very simple: "Achieve world speed record with 660cc engine."

The team carefully re-investigated every part of the S660 engine and renewed many of them including cylinder block, pistons, crankshaft and valves in hopes of coaxing more than three times the power for which it was designed. Additions such as the replacement of the lower block with a steel unit and reinforced connecting rods gave the unit the rigidity it would need to withstand the record run, and the car completed several test runs in Japan before heading to the U.S.

But as can happen when building racing machines, an unforeseen problem popped up once the team made its first test run on the Bonneville Salt Flats. Test driver Hikaru Miyagi returned after his run and told the team that he could not see properly through the narrow canopy.

The vision had not been a problem on the test track due to the abundance of landmarks and road marking, but on the bleach-white expanse of the salt flats, the former Japan motorcycle champion was having trouble keeping the car pointed in the right direction.

So the team took the car back to Honda Performance Development in Santa Clarita, California where they restyled the canopy and most parts of the upper body just 10 days before the first day of the Bonneville

The Honda S-Dream made several strong runs at Bonneville Speed Weeks but was unable to reach the record speed that it sought. But soon after the conclusion of Speed Weeks, Honda was officially invited to Mike Cook's shoot out at Bonneville to take another run at the record.

The team broke the FIA record mark with a run of 227.776mph on the first day of the shootout, then went quicker on subsequent runs until officially topping out at 261.875mph(1mile), 261.966mph(1km). In fact, the team reached 266mph on one of its runs late in the event, but was unable to duplicate the speed on the return run as required to set an official mark.