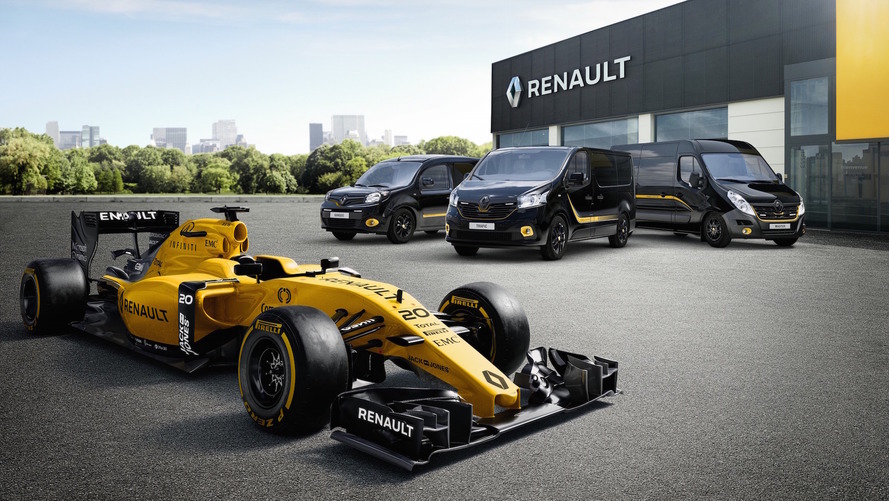 What do F1 cars and cargo vans have in common? Nothing. But if it were up to Renault (and it is), the two parties would no longer be mutually exclusive. The announcement of the Pro+ line at the Hanover International Commercial Vehicles Motor Show, introduces with it an F1-inspired van for the whole LCV range - Kagoo, Trafic, and Master.

The Renault Sport Formula One Team and Renault Pro+ have teamed up to develop this unique iteration specifically for the LCV lineup. New exterior characteristics range from black grilles and bumpers, to satin black Renault logos and door mirrors, to black alloy wheels.

A yellow-gold trim - borrowed from the F1 team, of course - accents the side panels, and continues its due diligence on the grille, doors, fog lights, and hub caps. Renault says that the new accenting gives the LCV lineup, “an undeniably sporty look;" at least, as sporty as one can get in a van.

Inside, designers gave the LCV range the same attention to detail as the exterior. A satin-finished center console pairs with a leather steering wheel and team-colored floor mats. The final result is an interior and exterior that would look right at home on the track… and that’s exactly the point.

Though not as race-ready as the 1994 Espace F1 concept, these special edition vans will sit trackside at upcoming F1 events for the rest of the 2016 season, particularly Viry Chatillon in France, and Easton in the U.K. Duties will range from assisting in transportation of guests and journalists to the race, as well as team logistics and equipment hauling.

For consumers, the limited edition series will be available at Renault dealerships throughout Europe beginning early 2017. No word on pricing just yet.

In January 2016, to accelerate the pace of sporting innovation and build its renown, Renault founded its own team, Renault Sport Formula One Team. These two entities have signed a global partnership based on their shared values.  To celebrate this partnership, Renault Pro+ is launching a Formula Edition limited series across its LCV range.

A partnership between Renault Pro+ and Renault Sport Formula One Team

In January 2016, Renault founded Renault Sport Formula One Team, marking its return to motorsports with its own Formula 1 team. With 12 Constructors titles, Renault has been an emblematic player in the history of Formula 1 for almost 40 years. F1 is a showcase for new technologies. It accelerates the development of innovations and the Renault range of sports vehicles. Formula 1 also contributes to building the image and renown of the brand in all its markets the world over. It is one of the sports with the greatest global media coverage, viewed all over the world and particularly in emerging markets. It attracts 450 million viewers per year.

– Renault Pro+ will supply shuttles to take guests and journalists to the track side at Formula 1 Grand Prix events.

– Renault Pro+ will supply the vehicles required for team logistics, particularly at the sites of Viry Chatillon in France and Enstone in the UK.

A Formula Edition limited series across the LCV range

To celebrate this original partnership with Renault Sport Formula One Team, Renault Pro+ is launching a limited series across its LCV range, on Kangoo, Trafic and Master. The Formula Edition limited series LCVs gain greater presence and character with their black grilles and bumpers, satin-black Renault logos and door mirrors and black alloy wheels.

The vehicles also feature a yellow-gold trim, borrowed from the Renault Sport Formula One Team, on the grille, doors, fog lights and hub caps. This gives the range an undeniably sporty look. The interior design reflects the same care and attention. A satin-finish central console, leather steering wheel and floor mats in the colours of the team add the finishing touch to the Formula Edition.

Designed to share enjoyment of motorsports, this limited series will be available in Europe in early 2017.