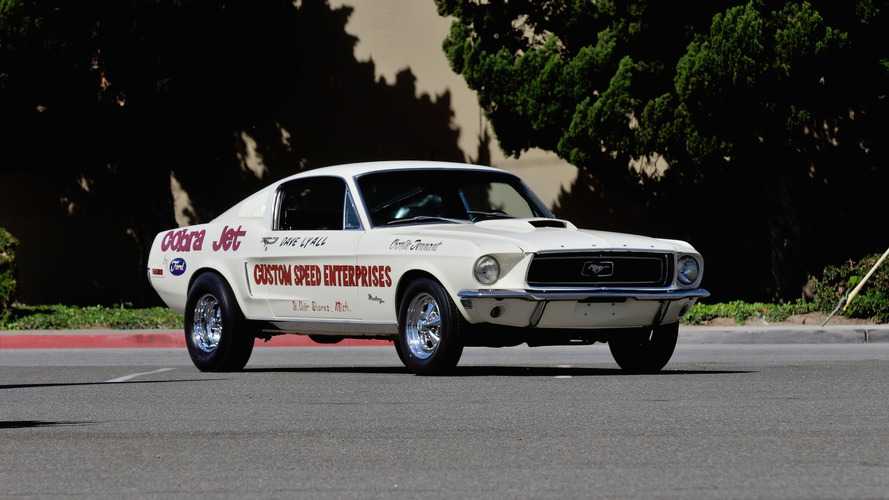 1968 was a big year for the Ford Mustang - both literally and figuratively. Coming off a successful launch, the Mustang would get its first redesign for the 1967 and 1968 model years. That redesign would include some changes to the exterior trim, including headlights and taillights, and an increase in interior volume.

But the Mustang’s more spacious interior wasn’t what made this car special. Following the fitment of Ford’s 335-horsepower (249 kilowatt) FE Thunderbird engine under the hood, the Mustang would undergo its most intensive track-prepping to date - and it was all thanks to Ford dealer Bob Tasca.

Tasca - creator of the famed Thunderbolt drag racers - had a plan in place to make the Mustang even more powerful. He would take a custom-built 428 cubic-inch FE big block, done by expert John Healey, shove it under the hood, and make the whole package much lighter.

When Ford caught wind of this more performance-oriented Mustang, execs invited him out to their test track in Dearborn. Ford was so impressed with the performance of Tasca’s lightweight Mustang, the company called for 50 examples to be built. Each one would use one of two variations of the 428 cubic-inch engine dubbed Cobra Jet.

So why the history lesson? One of those legendary Cobra Jet Mustangs is heading to auction next month at the Mecum Chicago sale. It was originally owned and raced by Ford factory engine specialist Dave Lyall, who purchased the car for just $1.00 under the standard agreement for factory-sponsored racers.

The car has since been given a full frame-off restoration, and comes finished in the original livery driven by Lyall. Features like Crager SS wheels, eight-inch Goodyear Blue Streak slicks, and a manual Hurst four-speed shifter have been fitted to further promote this pony car’s performance.

It’s one of the few fully restored examples to come up for auction, and though Mecum doesn’t give a price estimate, previous examples have sold for over $130,000.

Ford had the beginnings of a drag-racing superstar when it made the 390/320 HP FE big-block engine available in the Mustang in 1967, but it took the creator of the famed Thunderbolt drag racers, Ford dealer Bob Tasca, to once again show Ford management the way to success. Having already built a supercharged 390 Mustang for street use, Tasca challenged Dearborn with his version of a lightweight Mustang Fastback powered by a 428 CI FE big-block engine specially built by Tasca’s engine expert John Healey. Ford brass invited Tasca and his car to the Dearborn test track and were so impressed by the car’s performance that they decided to build 50 purpose-built lightweight Mustangs for 1968 using two versions of the 428 CI engine they dubbed the Cobra Jet: one for Super Stock/E with 11.6:1 compression and a solid-lifter cam; and the other set at 11.0:1 and using a somewhat milder hydraulic cam for C/Stock. Delivered to Ford for the stated purpose of "Highway development for Stock Vehicles Department," this 1968 Cobra Jet Mustang was raced by Ford factory engine specialist Dave Lyall, who purchased the car for $1 under the standard agreement for factory-sponsored racers. It has been refinished in Lyall’s familiar racing livery as part of a comprehensive and photo-documented restoration and is presented as Lyall drove it, complete with Cragar SS wheels, 8-inch Goodyear Blue Streak slicks and a Hurst shifter. This famous Cobra Jet Mustang factory lightweight racer is well documented with copies of the window sticker, Lyall's $1 contract, Michigan title search, Ford internal memos about the 428 Cobra Jet Lightweight Mustang program and a Marti report.