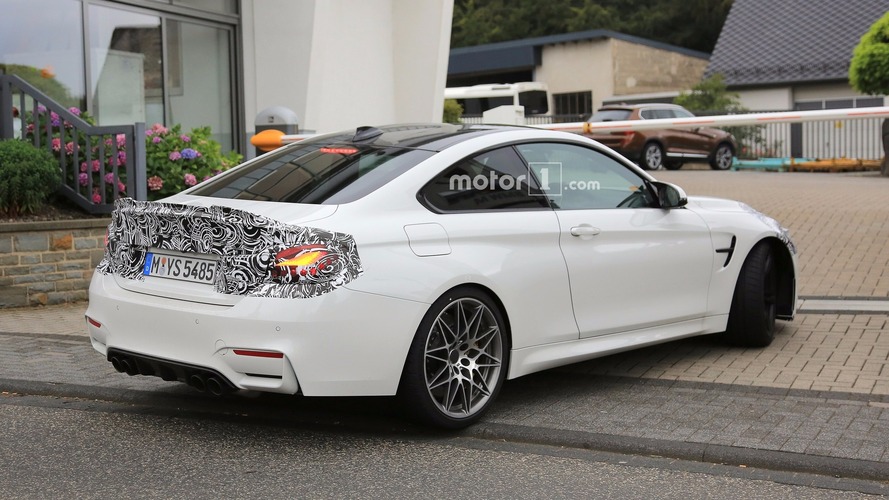 The mid-cycle refresh for the M4 will likely see the introduction of optional OLED taillights derived from the sold-out M4 GTS.

BMW was out with a partially camouflaged prototype of the M4 facelift testing the other day, and thankfully our spies were at the right place at the right time. The test vehicle is certainly interesting, partially because of its mismatched wheels with the ones at the rear axle sourced from the M4 GTS special edition.

Speaking of which, the BMW M4 GTS was the first production car in the world to feature OLED taillights and chances are this white prototype was rocking the same setup since the cluster’s graphics appear to be similar. The only car on sale today available with OLED taillights is the Audi TT RS Coupe & Roadster where the organic light-emitting diodes can be had as optional equipment, much like it will be the case with the M4 as well.

Beyond the wheels and taillights, we also notice the prototype was trying to hide under disguise the M Performance rear spoiler originally launched towards the end of 2014. It’s made from carbon fiber and serves as a more subtle alternative to the big rear wing also part of the M Performance catalog tailored to the M4.

Moving at the front, you can easily observe the new look of the full LED headlights already implemented in the facelifted M3 Sedan launched in 2015, while other minor tweaks might be hiding underneath that swirly camo.

Taking into account the M3’s turbocharged 3.0-liter inline-six engine did not receive a bump in output with last year's Life Cycle Impulse, it would make sense for the M4 to solider on with 425 horsepower (317 kilowatts) and 406 pound-feet (550 newton-meters). That being said, there might be at least one special edition in the pipeline with some upgrades to bridge the gap between the regular M4 and the M4 GTS. As a matter of fact, the current M4 has already received something along the lines of an in-between edition, with the M4 Competition Sport launched a while ago exclusively in Spain.

As to when we will get to see the refreshed M4, rumor has it BMW will have it on sale by March 2017, so an official introduction should occur early next year together with the lesser members of the 4 Series Coupe lineup.