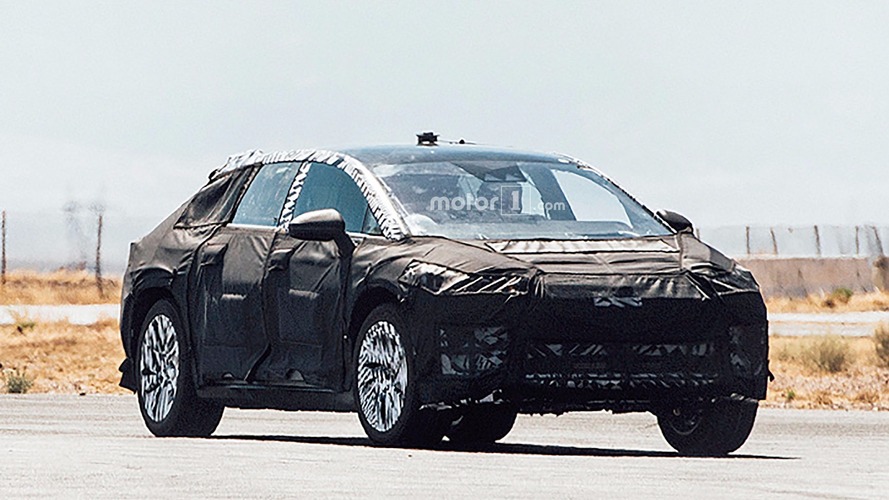 Faraday Future is developing an electric crossover with sleek styling, and these are some of the first good photos of the camouflaged model.

A trio of new spy photos is giving us a much better look at Faraday Future’s upcoming Tesla Model X-fighting crossover. According to our spies, the company is developing the electric vehicle at a secluded facility in the Mojave Desert.

The significant amount of body cladding on the vehicle hides the styling cues, but we can still gain insights from the crossover’s silhouette. The front end has a fairly short hood that arches downward from the windshield. The cutouts in the camouflage also suggest the model has high-mounted headlights that sweep upward. The passenger compartment looks quite airy thanks to a large windshield, and the rear hatch has a steep slope, which gives the CUV a coupe-like appearance. We are expecting a bold, distinctive design that would immediately establish Faraday Future as an automaker with style.

Faraday Future has kept powertrain details a secret about its first production vehicle. We know that the CUV is fully electric and has an advanced semi-autonomous driving system. Look closely at the top of the windshield in these photos, and you can see the two cameras near the rearview mirror. California already gave the company permission to test the driverless system on public roads, and spy shots earlier this year showed the company evaluating the tech on a Lincoln MKZ.

The new EV maker made its big debut at the 2016 Consumer Electronics Show with the 1,000-horsepower (746 kilowatts) FFZERO1 electric supercar concept. The futuristic vehicle just showed what the company could do, and a teaser video offered the first glimpse of electric CUV.

Faraday Future has remained quiet about its production vehicle, but the business built an impressive team for the model’s development. For example, former Ferrari North America CEO Marco Mattiacci is the company’s Global Brand Chief, and folks from Tesla and Apple have moved there, too.