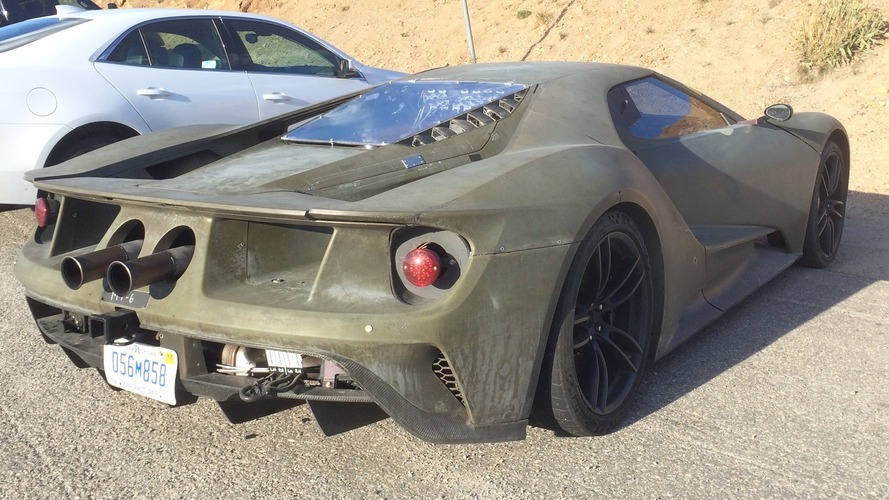 The near-production prototype has been caught on camera undergoing final testing in Colorado.

With customer deliveries scheduled to commence before the year’s end, Ford wants to make sure the 2017 GT will live up to its supercar status and at the same time its rather hefty $400,000+ price tag. That’s why the Blue Oval company has asked Roush to test a couple of prototypes across the United States to gather feedback and make any necessary last-minute tweaks. Reddit user “lacaplol” has spotted one of the prototypes and has learned from the Roush test driver that the car has already covered lots of miles all over the U.S.

Looking as if it’s ready to join the army, the test vehicle is wearing a matte green finish and provisional dual exhaust tips resembling machine guns. Ford is still keeping the biturbo 3.5-liter V6’s output numbers a secret, but at least we know the EcoBoost unit will generate in excess of 600 hp (447 kW) and will enable the carbon fiber-bodied GT “exhibit one of the best power-to-weight ratios of any production car.“ We also know courtesy of Ford Performance’s boss, Dave Pericak, the turbocharged six-cylinder might end up as a crate engine in the future, so there are some chances of seeing it in other low-volume performance cars in the years to come.

Meanwhile, it will exclusively power the GT supercar of which only 250 units are going to be assembled annually. Ford has so far only taken 500 orders for the first two years of production and will accept new applications in 2018. Chances are the available slots are going to be occupied right away taking into account that Ford has received 6,506 fully completed applications for the initial batch of 500 cars, so it had the luxury of picking out the customers.

Those lucky enough to claim a GT will have their prized possessions serviced by a dedicated technician in a special clean room. Dealers that have been assigned by Ford to work on the supercar will face a bill of around $50,000 to get the repair shop ready to handle the GT. The costs incurred will cover not only the dedicated technician and the bespoke clean room, but also a specified trailer for collections and deliveries, as well as for a bespoke transmission jack and a set of wheel lift dollies.

It all sounds very impressive, but we are more anxious to find out all the technical specifications and performance numbers, since we’re dealing with a proper supercar after all.