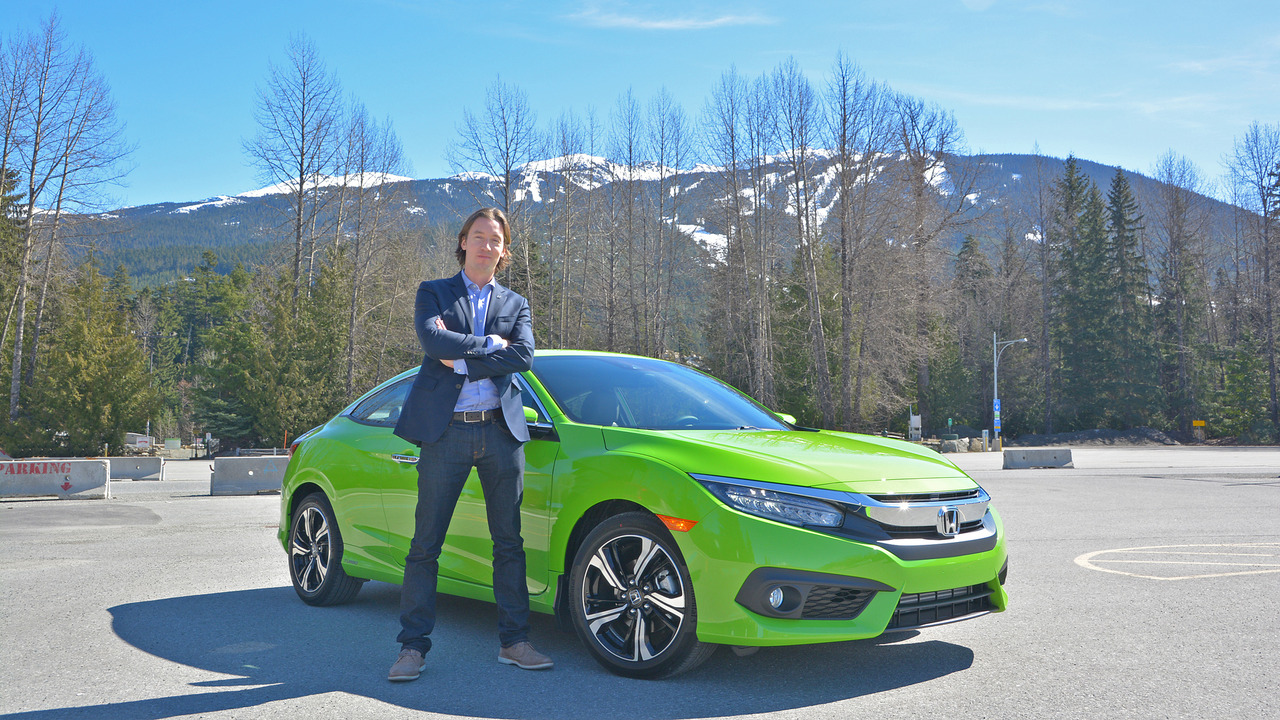 We chat design, the people, and personal history with Lead Exterior Designer at Honda, Guy Melville-Brown, in this exclusive Q&A.

We first laid eyes on Honda’s 10th generation Civic design as a concept coupe that was shown at the New York Auto Show back in the spring of 2015. The Turbo Civic Coupe concept was bold and brash, and even slathered in neon green paint. Most auto journalists, myself included, let out an exasperated sigh. Honda after all, wasn’t known for building this kind of thing, most of us figured what we saw was nothing more than concept and hype that would never materialize.

Then in October, the company revealed the 2016 Civic Sedan, and we were all impressed. Four months later when the 2016 Honda Civic Coupe came along we were downright shocked. Here was a production vehicle, that very nearly resembled the concept it was based on.

So when we had an opportunity to have a brief chat with the designer behind the 2016 Civic Coupe, I didn’t have to think twice about deep-diving into how the design developed throughout the process.

Kanishka Sonnadara: What’s your role within the company?
Guy Melville-Brown: I was the lead exterior designer for the 2016 Honda Civic Coupe.

KS: You have a lot of history in the industry, tell us a bit about your work before Honda.
GMB: I grew up in Brighton, England. I studied at Coventry University which is kind of like the English Detroit. That’s where Land Rover, Aston Martin, companies like that are. I interned at Peugeot and Citroen in Paris. My first job out of school was working for Fiat in Itlay. Then I took the trip north to Berlin where I worked for Volkswagen. And then four and a half years ago I came to Honda and started working on projects like the Civic.

KS: How long have you been on the current Civic project?
GMB: I started at Honda four and a half years ago. And I believe my first project was sketching and drawing Civics.

KS: With the tenth generation Civic, what did you want to achieve, what was the goal?
GMB: We wanted to create the most charismatic, ambitious, sportiest, most fun to drive Civic we’ve ever designed. We wanted this car to embrace and communicate the passion of the people that work at Honda. A car that stands for what we stand for as a company; a car that represents our heritage in motor racing, in Formula 1, in IndyCar; and a car that we as employees can be very proud of.

KS: What challenges did you face doing this, in this process?
GMB: I think convincing the engineering department to completely re-engineer the platform was a pretty tough one. In order to truly achieve the styling that we wanted to achieve with this product, and we felt we needed to achieve and for the product to be honest, we needed completely re-engineer the platform and that was a hard sell.

KS: A personal favorite design element in the car?
GMB: A couple. The first is the way the car sits on it’s wheels; it’s stance. I really like this very sporty, quite kind of muscular, almost like street-fighter like stance with strong haunches. I’m also very proud of the signature LED lighting at the front and the rear of the vehicle. I like the fact that this is a car you can identify just as easily in the nighttime as you can in the daytime and that’s something I’m very proud of.

KS: Tell me a little bit about the people you worked with on both interior and exterior design for the new Civic Coupe.
GMB: It’s very interesting. With this we’re very lucky because the Civic was a global project and a global effort. So we got to meet, design and work with people from all over the world on this car. We had design studios in Japan, Europe, and in the U.S. I really appreciated the fact that brought a global richness of perspective you wouldn’t have if you just had American designers working on it, or just Japanese designers. And I think also that brought a level of healthy competition that kind of allowed us to push the design far further than we could have ever imagined it could get pushed to if we just had one small group of people or one studio working on the car.

KS: I know you have a few Civic stories from your past; tell us a 'Civic Nation' story, something that’s personal to you.
GMB: My parent’s first car was a 1978 Civic. This was the car I grew up with. This was the car that every time my dad’s back was turned I would jump in and turn the volume knob up and the windscreen wipers on, so when he would get in and turn it on, the radio would be blaring and wipers would be going and he’d be like “Guy! You’ve done it again!” For it to now almost come full circle and to have the opportunity to contribute to the legacy of what the Civic is, is something I feel very proud of