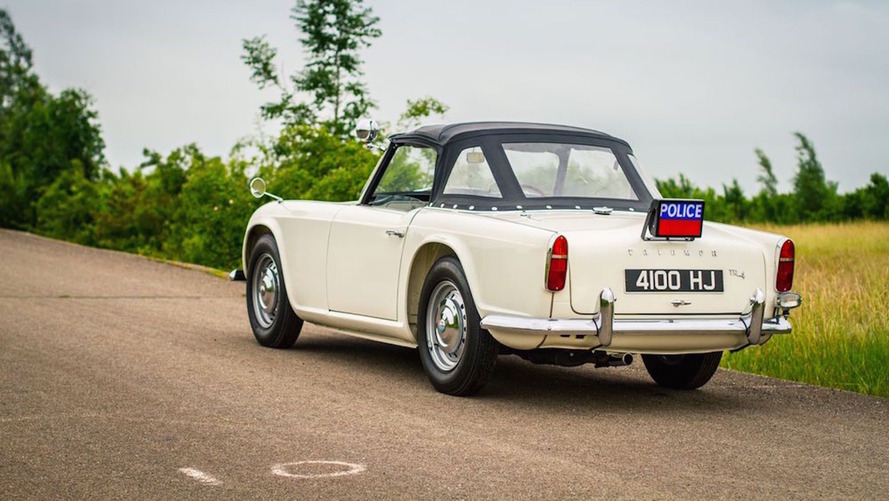 A number of Triumph TR4 police cars were put into commission in the U.K., but this is the last one known to exist.

This isn’t some ordinary old Ford Crown Vic, or even a new Dodge Charger - it’s a 1962 Triumph TR4 Police Cruiser. It features a 2100cc inline four-cylinder engine, a four-speed manual gearbox, and it’s for sale.

With the growth of the sports car in the 1960s, police in the U.K. began having trouble keeping up with criminals. The Southend on Sea County Borough Constabulary of Essex, England, had a solution. They would take a 1962 Triumph TR4 convertible and turn it into a “Fast Pursuit Car,” so they called the new position.

Of course, that meant taking the standard TR4 and building it up to proper police spec. Modified in-house at the Constable’s own workshop, the TR4 was given the proper police equipment, including an illuminated front “Police” sign, a trunk mounted “Stop” sign, fender mirrors, a Winkworth bell, air horns, a reverse light, and a hand-operated spotlight mounted on the passenger side.

With all the new equipment fitted, the TR4 was ready for the streets. The car was sent on patrol every day, typically working double shifts, and clocked nearly 1,000 miles per week. In that time, the TR4 was tasked with duties ranging from chasing criminals, to a high-speed run from Southend Hospital to London and back.

After retiring from the force, the Triumph sat unused for a number of years before it was fully restored in 2000 by Neil Revington of Revington TR Restorations. It was given a brand new, period-correct inline-four, which has clocked less than 5,000 miles on the odometer since restoration. The exterior was done with care at the hands of Triumph specialists and police historians to assure its correctness.

The exterior wears a white finish, with all the original trim having been restored to like-new condition. The interior follows the same original detailing, with black leather seats, a wood-rimmed steering wheel, and the original gauge clusters.