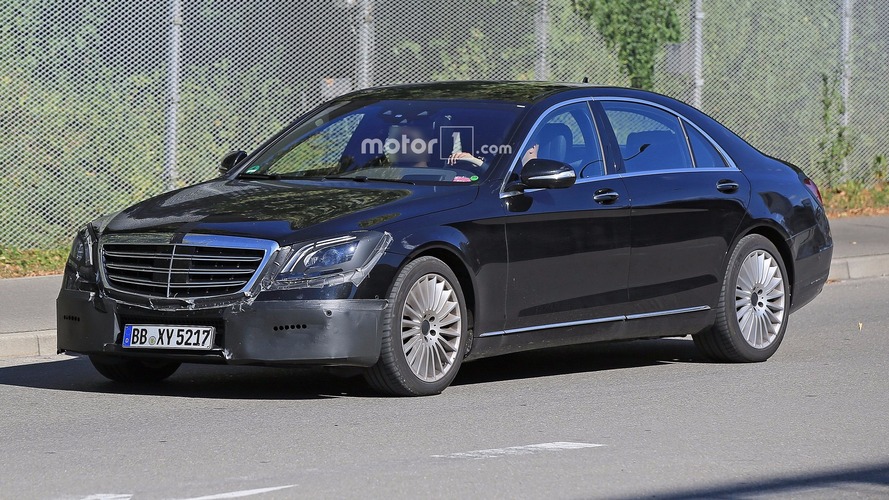 The cream-of-the-crop Mercedes is preparing for a mid-cycle facelift to stay fresh in its battle with the latest 7 Series and the forthcoming A8.

The facelifted S-Class has been spotted several times in recent months, but this time around the prototype is a bit more interesting as it has more of the production parts. The changes will start at the front where the fullsize posh sedan will host tweaked headlights with different graphics and a new LED daytime running lights signature. The lower half of the bumper has also been modified, but the changes remain hidden underneath the black camouflage tape.

Moving at the back, it’s a similar story. The LED taillights are also sporting a new design and the body-colored disguise indicates some changes to the bumper are also in tow for the new model year. Overall, the cosmetic surgery for Mercedes’ flagship model will be minor, as will be the updates inside the lavish cabin.

While the latest spy images are not providing us with a clear view of the interior, the above pics from earlier this year have uncovered the novelties, including a three-spoke steering wheel. By far the most significant change will be noticeable in the dashboard where the buttons between the dual 12.3-inch digital displays will be removed to give the instrument cluster a more cohesive look.

Details about engine changes are scarce at this point, but the E-Class is rumored to receive a new family of inline-six gasoline and diesel units in 2017, so it would make sense for the “S” to get them as well. As a matter of fact, it would be more logical for the fullsize sedan to call dibs on these new powertrains taking into account it sits on top of Mercedes’ range.

Mercedes hasn’t said a word about the facelift’s reveal date, although we might see it as early as January 2017 at the North American International Auto Show in Detroit. If not, the updated S-Class will likely show up in Geneva two months later.