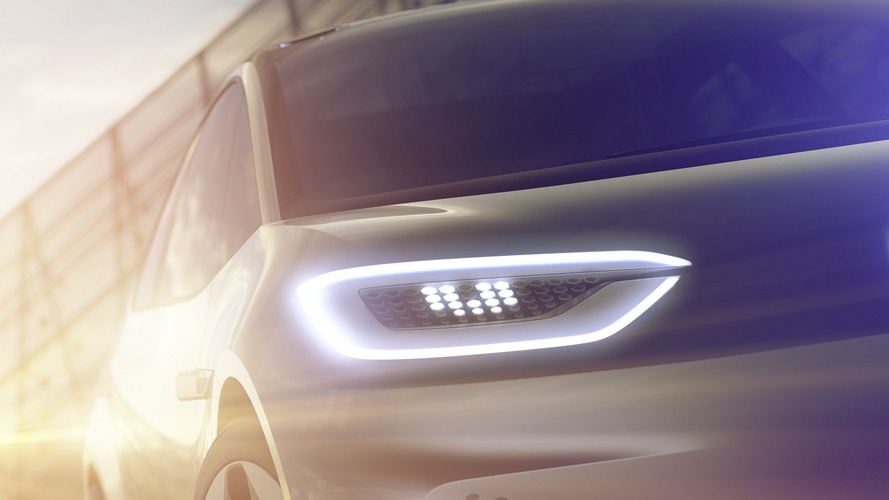 The production version which will follow is going to be the first model based on VW's new modular electrification kit (MEB).

Billed as being a “one-of-a-kind concept car” and as revolutionary as the Beetle, the zero-emissions vehicle will pave the way for VW’s electrified future. The concept will be about as large as the Golf compact hatchback on the outside, but as roomy as the midsize Passat on the inside. We already know from VW's brand boss Herbert Diess the EV’s battery pack in production specification will have enough energy for a range between 400 to 600 kilometers (248 to 372 miles) based on the New European Driving Cycle (NEDC).

To keep the model at an affordable price tag, VW will use a normal body construction that will predominantly make use of steel. Christian Senger, the car’s project leader, has already announced construction will be similar to the group’s models on sale today and that there will not be “any radical body concepts.”

While the EV is being described as a concept in the press release published today, we need to remind you Diess has said the car that will be exhibited in Paris will be a near-production prototype. In other words, it means the road-going vehicle is not going to be all that different compared to the showcar that will be introduced next month in France’s capital.

The concept will make the transition to a production model around 2019 and will be VAG’s first MEB-based product, with lots of other models to follow in the next decade. These will include a second-generation Phaeton to serve as the flagship model, along with a production-ready Budd-e, a small crossover, and a coupe.

The EV push is part of the company’s new “Together - Strategy 2025” and the plan is to launch no less than 30 electric vehicles by the middle of the next decade. By 2030, VW estimates a third of the group’s entire sales will consist of EVs.

Wolfsburg, 16 September 2016 – The presence of Volkswagen at this year’s Paris Motor Show (1 to 16 October) is all about “Think New.”. In presenting the world premiere of an iconic design study, Volkswagen introduces a new ambassador to the automotive world. This one-of-a-kind concept car signals the Volkswagen brand’s entry into a new era. The vehicle is as revolutionary as the Beetle was seven decades ago, before it evolved into the world’s best-selling car of the last century. This car, too, has the potential to make history with its completely new vehicle concept. The production vehicle which follows will be the first Volkswagen to enter the market based on the new modular electrification kit (MEB).