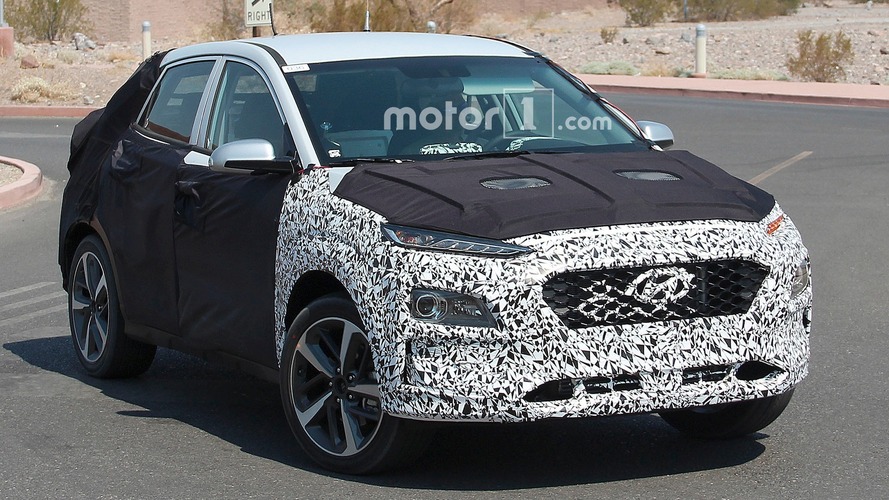 Hyundai is the latest automaker to prepare an entry in the popular compact CUV niche.

Sometimes automaker’s camouflage does an especially good job at hiding a vehicle’s identity, and now we now know spy shots of an alleged Kia compact crossover is really a Hyundai. The new photos plainly show the brand’s stylized “H” on the grille, and they give us a slightly better look at the rest of the design, too.

This is our third time seeing the camouflaged test vehicle during hot-weather testing, and the engineers strip off a little more obfuscation for each outing. This time we can get a fantastic look at the mesh grille and the narrow intake on the lower fascia that stretches along the CUV’s bottom edge. The slits ahead of the front wheels give the appearance of brake cooling ducts, which lends the face a sporty aesthetic.

Note the odd lighting arrangement around the hood, too. On the passenger side there’s an arrangement with a strip of LEDs and a turn signal on the outer edge. Conversely, there’s just an amber piece on the driver’s side. The layout appeared on the earlier test mules, too, but the relative lack of camouflage at the front in these photos made the weird configuration especially visible.

The rear is still heavily camouflaged, but this time the spies photographed it with the taillights on. They appear to be rather narrow pieces and seem to taper at the edges.

The compact crossover segment is incredibly popular right now, but it’s also crowded with quality entries. Buyers can pick from impressive models like the Honda HR-V, Mazda CX-3, Buick Encore, Nissan Juke, and Jeep Renegade. Hyundai’s contender in the niche is at least a year away, and the automaker needs to nail the vehicle’s execution. With so much strong competition, customers have a lot of alternatives to consider if the Hyundai doesn’t impress them.