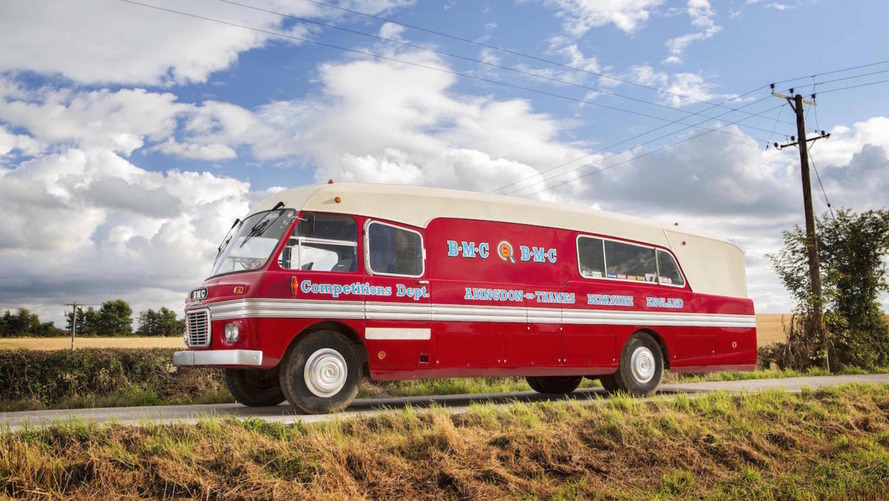 This beautiful bus was an integral part of the British Motor Corporation’s success.

This is a bus (obviously) - but it’s not just any bus. The 1959 British Motor Corporation (BMC) 5-Ton Race Transporter was an integral part in getting the then new Mini out on the road. It’s coming up for sale at the Bonhams Goodwood Revival Auction in the next few weeks, and it looks absolutely stunning… for a bus.

Manufactured and introduced in 1959, the 5-Ton was produced in extremely limited quantities. Just 20 were built, each one traveling around a dealership network in the U.K., and training mechanics required to maintain the new Mini with its unique front-wheel drive traverse-engine layout.

The one pictured here was originally registered ‘BMC 25,’ and is likely the only survivor of the original six prototypes. All the aluminum coachwork was done by Pininfarina in Italy, with the final production and assembly done by Marshall’s of Cambridge in the U.K. After a number of years making a circuit of the dealership network, BMC used it on the actual circuit as a race transporter.

Making its way from the U.K. to Australia, it was part of BMC’s Abingdon-based Competitions Department, and became a crucial part of transporting vehicles and parts for a number of years. After its time on the track was completed, it was sold to Birmingham University for a mere £1.00, where it then made its way back to the U.K. and stood static as a coach company’s mobile booking office.

It was found a number of years later abandoned in a field and was given a full restoration. It was converted from its original ‘BMC 25’ chassis, to a replica of the ‘BMC 34’ chassis which was longer, and used more extensively as a Competitions Department race transporter in its heyday.

The conversion was completed by engineer Gordon Chance, having to be re-built virtually from the ground up without the availability of original parts. The original 5.1-liter six-cylinder diesel engine remains, paired to a five-speed manual gearbox and a two-speed rear axle.

Manufactured in 1959, this BMC 5-ton PSV chassis was one of approximately 20 commissioned by the company's management to serve as mobile Service Schools, which travelled around the dealership network training mechanics in the procedures required to maintain the newly introduced, front-wheel-drive Mini. Designed by Pinin Farina and built by Marshall's of Cambridge with all-aluminium coachwork, they were equipped to a very high specification. Originally registered 'BMC 25', this example is the prototype of the series and almost certainly the only survivor of the first six, which had more rounded styling than subsequent examples. It was later loaned to BMC's Abingdon-based Competitions Department and used by them in Australia, the visit being recorded on video. Eventually sold to Birmingham University for the nominal sum of £1.00, 'BMC 25' ended up as a coach company's mobile booking office.

The previous owner, a collector and racer of historic BMC competition cars, discovered the vehicle in a field where it had lain for ten years. Surprisingly, it moved out of the field under its own power; not only that, but the chassis and panelling were found to be sound. Not content merely with a restoration, the vendor wanted to rebuild the vehicle in the style of 'BMC 34', the famous Competitions Department race transporter, which had an extended rear end enabling it to accommodate two Mini Coopers. Sadly, 'BMC 34' no longer exists, having been destroyed by arsonists in the 1990s.

To assist with conversion, the vendor recruited Bromsgrove-based lorry engineer and commercial body builder, Gordon Chance. As there were no plans in existence, the reconstruction used photographs of the original. By an amazing stroke of good luck, a supply of the correctly profiled rubber strip fitted to the long rubbing strakes was located; it was the last 200 feet the manufacturer had in stock and all but one foot was used.

The transporter is powered by a BMC 5.1-litre six-cylinder diesel engine, which drives via a five-speed non-synchromesh manual gearbox and two-speed rear axle. The cylinder head was rebuilt and the engine serviced as part of the restoration.

Interviewed for an article about 'BMC 25', published in Classic Cars'July 2004 edition (copy on file), BMC Competitions Department employee Stan Bamford recalled that the BMC transporter he drove was faster than its continental HGV brethren: 'It was beautiful, marvellous. We'd show all the French and Italians a clean pair of heels. It went up hills quicker than they could look at them.' The transporter's motorway cruising speed was estimated at 60mph.

The current vendor purchased the transporter at Bonhams' sale at the Goodwood Revival meeting in September 2014 (Lot 306). The vehicle was then despatched to Woolmer Classic Engineering Ltd in Roothams Green, Bedfordshire to have various remedial works carried out (bill on file). These included replacing the electrical wiring at the front of the vehicle with a new hand-made loom; returning switches to original specification; repairing defective instruments; removing, refurbishing, repainting, and refitting the dashboard; and improving the fit of the engine cover to reduce noise, heat, and fumes in the passenger compartment.