How to attend the Goodwood Revival like an aristocrat 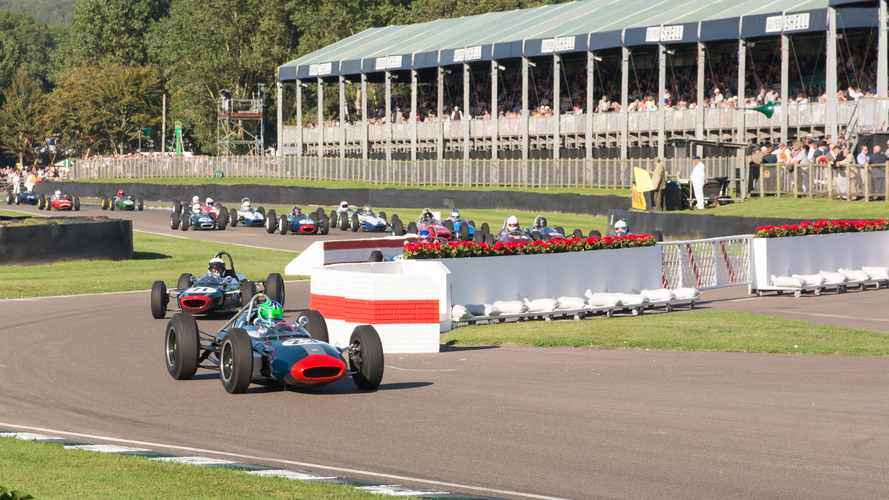 Leave it to Subaru to show us the best way to see what’s what.

The Goodwood Revival is a uniquely British to-do. Thrown by a member of the English peerage, Charles Gordon-Lennox, Earl of March and Kinrara, on the sweeping grounds of the Goodwood Aerodrome and Circuit, the Revival collects the finest racing machines built before 1966, mixing the Pebble Beach Concours d'Elegance's caliber of cars with the strict adherence to strange fashions of the Kentucky Derby and the wheel-to-wheel racing action of the Indianapolis 500. Then, add a healthy dollop of World War II nostalgia, throw in a bottle of Dom Perignon for good measure, turn the entire affair up to 11, and you get a three-day automotive Woodstock set in racing's 1960s heyday.

While it's possible to enjoy this madness on your own dime, our trip to Goodwood came from our friends at Subaru. Yes, pairing the Revival with a company whose motorsports background is almost exclusively post-1966 seems strange, but Subaru is an off-beat brand, always eager to exploit things its rivals ignore – to the best of our knowledge, the group of journalists and photographers Subaru imported to the United Kingdom were the only guests of a major automaker at the entire event, despite Aston Martin, BMW, Ford, Jaguar, Land Rover, Porsche, and Rolls-Royce serving as the Revival's “Main Partners.” That's by design, Subaru PR man Dominic Infante said.

Attending events like Goodwood, not to mention the automaker's recent excursions to far-flung destinations like Tierra del Fuego, Iceland, and its regular presence at the Isle of Mann TT, is part of Subaru's goal of “going where others aren't,” to “showcase the dynamics of the cars,” Infante told Motor1. But while previous outings overwhelmingly focused on driving, our trip to Goodwood was without a driving element. Still, highlighting an event like the Revival is represents the brand's sense of adventure, Infante said. And what an adventure it was. Here’s how to do it all in supreme style.

The Goodwood Circuit surrounds the Chichester/Goodwood Airport, a small, local sort of place with grass runways and plenty of accommodations for helicopters. That's good news, because when over 50,000 people descend on the quaint British B-roads that surround the track, causing some truly nasty traffic jams, the only avenue for the well-heeled is to take the chopper. The nearly 15-minute trip from our hotel's helipad in nearby Horsham to Goodwood's facilities provided spectacular aerial views of the rolling English countryside, particularly on the final day of the event, where stunning blue skies and bright sun were the norm. After landing, rows of World War II-era Jeeps, Land Rovers, and Dodge WCs usher guests from the helipads across the active runway (where else do the Supermarine Spitfires, P-51 Mustangs, Hawker Hurricanes, and even a working Lancaster Bomber that constantly fly over the circuit take off and land from?) through a recreation of Goodwood's Royal Air Force base roots and into the circuit itself. While the arrival at the Revival is exceedingly modern, the vintage indoctrination begins immediately.

Get A Pass For The Revival Car Show

If the helicopter is too shouty, Goodwood's incredible Revival Car Show is another way to show off your extravagant wealth. Little more than a field across the street from the main circuit, the Revival Car Show is heaven's own car park. It's better than any Cars and Coffee, anywhere, because no Cars and Coffee can attract half a dozen Aston Martin DB5s, more Jaguar E-Types than you can count, and an enormous variety of other assorted brands from Ferrari to Triumph to Peugeot to Bentley. We could write another 10,000 words on the subject, and we still couldn't do it justice. The Car Show is a highlight of the Revival that you must see to believe.

The Goodwood Revival is as much motor race and car show as a display of vintage fashion. Tweed is the predominant material, although attendees excel at spicing their fashion up with more than a simple suit. Vintage military uniforms, whether they be British or American Army, Air Force, Navy, or Marines are hugely popular, especially if you fancy yourself a flyer. Your outfit can be as simple as pilot's coveralls or as elaborate as service dress. You'll even see mishmashes, with attendees snagging a Royal Air Force coat, complete with ribbons and rank insignia, and pairing it with a rough approximation of the correct trousers, shoes, and shirt. The possibilities extend from there – hippies, tramps, beatniks, greasers, mods, mechanics, and other outfits add to Goodwood's eclectic flavor. Make sure to research each year's theme, too. 2016 marked the 50th anniversary of England's win over West Germany for its first World Cup title, and the Revival was keen to commemorate the occasion, recruiting hilarious soccer football fans to parade and chant around the circuit.

Know Where To Sit

Let's be clear – Goodwood has no bad seats. Spectators line the outside of the track with little in the way of runoff areas, but the only way to truly act like a Lord or Lady is to hang out in one of the VIP areas. Each has its own character and mirror's the Revival's sense of fashion. The Goodwood Mess is a favorite, decked out like a World War II-era mess hall with military paraphernalia, vintage propaganda posters, more Union Jacks than you can shake a stick at, and home to constant entertainment from a roving band of performers singing classic songs, marches, and chants. Ideally located just past the start/finish line, the Mess features a "garden area" with tables, chairs, and umbrellas for a good view of the action at one of the track's fastest spots. We also recommend walking down past the pavilion for an excellent view of Madgwick Corner, a medium-speed right hander. Alternatively, the Salvadori Pavilions provide a respite from the madness of Goodwood's infield and track, offering up individual Art Deco rooms with lunch and bar service and quite possibly the best view of the track – extending from the end of the Lavant Straight, into Woodcote Corner, and through to the famous Chicane. With comfy reclining chairs on a hill overlooking the entire Lavant-to-Chicane complex, it's a brilliant location to follow the cars and sip on a glass of bubbly. Grandstand seating is also available throughout the circuit, if you'd rather avoid spending over £500 (about $660) per person for the high-end VIP seats.

Even the upper class needs to get out and experience the Revival, and for that, you'll need to take a stroll. The track's interior is a mix of old-timey stores – there are barber/salon services for men and women, an excellent (but pricey) cigar shop, a recreation of the Earls Court Motor Show, and for some reason, a lingerie store – situated next to the main paddock/garage area. Guests can puff on a Cuban cigar while watching the mechanics wrench on their multi-million-dollar machines, or simply enjoy the parade of cars as they head to the grid before each race. If you're in a spendy mood, a tremendous retail complex springs up around the track, selling vintage clothes and a vast array of automotive memorabilia. Sandwiched between the main circuit and the high-end car park, the shopping area is big enough that seeing everything in a single day is tough. The Revival goes all-in on dining, too – there are filets at the pavilions, but the pop-up food stands have delicious trays of beer-battered fish and chips and beer brewed from Lord March's own farm (we recommend the Sussex Ale). Try the commoner's grub at least once.

Sit Back And Enjoy

The Goodwood Revival is a celebration of all that's vintage and classic, but it doesn't extend to escaping the trappings of modern day life. The best way to immerse yourself in the atmosphere is to remove the smartwatch – the Rolex Submariner was an exceedingly popular alternative, we noticed – and put the iPhone away and enjoy the event. And that's true no matter where you're sitting. While this guide is all about our high-end experiences at Goodwood, the reality is this is a wildly enjoyable event regardless of how you see it. Aside from the pavilions and the helicopter, you can enjoy everything we mentioned with a simple general admission ticket. And that's the best thing about Goodwood – it's inherently English and aristocratic, but it's also accessible. So no matter how you plan on attending, make sure a trip to the Revival makes your bucket list.