The best of the 2016 Goodwood Revival 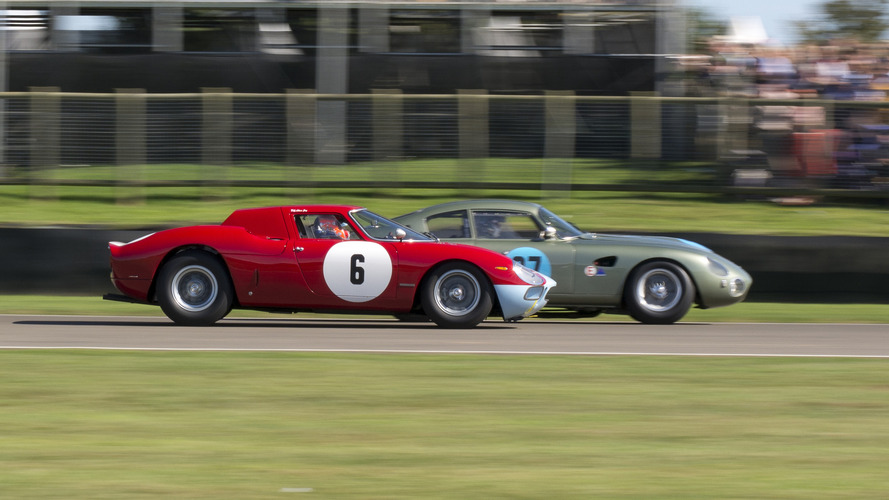 We distill the madness of Goodwood into a mega gallery and pick out a few of our favorites.

Every September, the Goodwood Circuit goes back in time for three days. The annual Revival, a mix of time travel, motor racing, and vintage fashion might get overshadowed by June’s Festival of Speed, but after attending the 2016 event, we’re here to tell you – you need to attend. What follows are some of our favorite sights from the weekend’s events, with a mega-gallery at the end so you can take in the full experience. That final galley has been pared down from some 2,400 shots to a more digestible figure, highlighting not only the best cars, but the best touches of atmosphere that the 2016 Goodwood Revival attracted. Vintage clothing, cars from before 1966, and the coolest parking lot you’ll ever see are just a few of the things coming your way.

Running almost constantly to and from Goodwood's helipad are a number of vintage military vehicles from Willys MBs to Dodge WCs to Land Rover Defenders. The drivers, decked out in highly authentic, full military uniforms, pick up and drop guests at a mock air base, decked out with tents and an anti-aircraft gun, just in case the Germans pop up. It's the perfect opener to the Goodwood Revival madness.

Ain't she a beauty? This 1957 Ferrari 500 TRC and its four-cylinder engine – yes, a four-pot Ferrari was a thing – was quite possibly the prettiest car to run in the Freddie March Memorial Trophy race, finishing 13th in a field made up of vintage sports cars, including the Maserati 300S, Alfa Romeo 3000 Disco Volante, Jaguar C-Type, and Aston Martin DB3S.

If you're wondering why this Sunbeam Tiger is a coupe, it’s because, once upon a time, Lister decided to take the tiny Tiger racing. So it took three examples, added a roof, and set out for Le Mans. Its efforts were forgettable, but the resulting car is gorgeous, like someone took an MGB and gave it the tail of a Shelby Cobra Daytona Coupe. With just three ever built, this particular car was one of the rarest to lap Goodwood during the 2016 Revival.

This owner is our idol. Here he is with one of the rarest, most expensive vehicles ever made, and it's racing at Goodwood. He's probably regretting his bravery, of course, as the near-priceless 250 GTO had a nasty encounter with an AC Cobra and crashed out after 14 laps during the wildly entertaining RAC TT Celebration race.

Sure, Brough Superior isn't as famous as the other brands in the Barry Sheene Memorial Trophy motorbike race – like BMW, Norton, Triumph, or Vincent – but this bike is 90 years old. The Brough Superior is 10 to 30 years older than its rivals, which showed in its finishing position. Despite its senior status, the SS100 Racing finished last on day one and retired five laps before the leaders crossed the finish line in the second timed race.

Arguably the most entertaining of Goodwood's many spectacles, David Coulthard joined a who's-who of touring car, endurance, and former F1 drivers for the St. Mary's Trophy. Pro driver and amateur drivers partnered up with a pokey Austin coupe from the mid 1950s for a two-day competition. The cars only have about 90 horsepower, but the racing is fierce and wildly entertaining. During the amateur session on Sunday, one driver tested the Austin's extreme tossability, taking a turn, running wide, and flipping through four spectacular barrel rolls in the 2016 Revival's nastiest wreck.

Guys, it's a Ford GT40 with a (mostly) Gulf livery. You didn't really think we’d skip that, right? Six of its brothers, all 1965 models, joined the blue-and-orange car in the Whitsun Trophy. The Fords, alongside a few Corvettes, gave Goodwood a certain American flair during a few races.

Among the many celebrations at the 2016 Goodwood Revival, the tribute to late F1 legend Jack Brabham was the most touching. On both Saturday and Sunday, Goodwood treated attendees to a parade of the three-time world champion's steeds, ranging from Cooper and Lotus F1 cars, to a classic Mini, to Black Jack's eponymous open-wheeled creations, to a hulking Ford Galaxy. And in one of the best displays, we saw Sir Stirling Moss, Brabham's contemporary in F1 and co-driver in other series, set out in this stunning Aston Martin DB3S that Sir Jack drove in 1958.

This is the third model from the RAC TT Celebration that we've mentioned, and there's a reason for that – the TT ran under a clear, blue English sky on the final day of the Revival, and featured the widest variety of cars that non-enthusiasts would recognize. This split-window Corvette Stingray was one of three second-gen Corvettes running during the TT Celebration – there was another 1963 split-window and 1965 co-driven by Corvette Racing ace Oliver Gavin – where it acquitted itself well against Jaguar E-Types, AC Cobras, and even a Ferrari 250 LM.

In a race filled with Jaguars, this particular D-Type didn't have a stellar finish – it came in just 13th. But it was possibly the most entertaining of the 22 finishers to watch, since driver Stefan Ziegler just couldn't keep its nose pointed straight, particularly on the exit of Goodwood's Chicane. Here, you can see him once again catching the tail while accelerating towards the start/finish line in the 2016 Revival's final race.