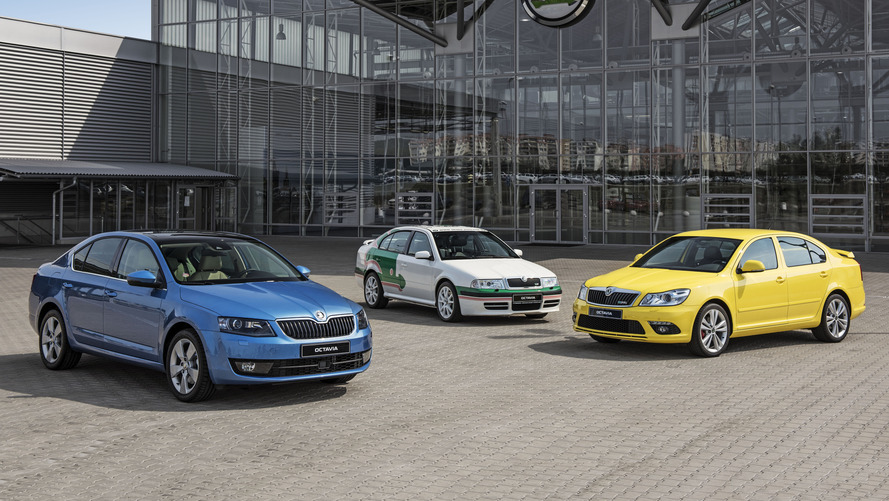 Two decades later, the model is the company's bestseller.

Less than half a year after Skoda celebrated the production of the one-millionth Octavia, the Czech company is marking the 20th anniversary of its bestseller. On September 3, 1996, the first modern Octavia rolled of the assembly lines at the then reconstructed plant in Mlada Boleslav. Two decades later, the Octavia is the automaker’s best-selling model.

“The plant is beautiful, modern, really pretty. It would be great if all factories looked like this,” former Czech President Vaclav Havel then commented after giving the starting signal for the production of the Octavia.

The development process of the first generation Octavia began in 1992 – less than a year after the Czech company joined Volkswagen Group. The vehicle was based on a completely new Volkswagen-sourced platform and was launched with two four-cylinder petrol engines and a turbodiesel. The last vehicle from the first generation rolled off the production line in November 2010 and, interestingly, Skoda offered the first generation as a cheaper alternative to its successor between 2004 and 2010.

The current third generation Octavia is manufactured in China, India, Russia, Kazakhstan, and, of course, in Mlada Boleslav. In the first half of this year Skoda has delivered 119,670 units to customers, which represents a healthy increase of eight percent over the same period of 2015, according to LeftLane.

For those of you who are unfamiliar with the history of Skoda, the name Octavia was used for the first time by the manufacturer in 1959, when a small family car with 1.1- and 1.2-liter four-cylinder engines was launched under the AZNP brand. Wonder where the name comes from? Octavia was actually the eighth car produced by the company back in 1959.

Mladá Boleslav, 12 September 2016 – 20 years ago, on 3 September 1996, former Czech President Vaclav Havel gave the starting signal for the production of the ŠKODA OCTAVIA in the newly opened part of the plant at the company's headquarters. This also marked the beginning of a unique success story: Over the following two decades, the ŠKODA OCTAVIA became a worldwide bestseller and is still the best selling model of the brand from Mladá Boleslav. The popular compact car paved the way for ŠKODA’s success.

In February 1995 in Mladá Boleslav, the foundation stone for the new production line was laid, on which the first ŠKODA OCTAVIAs would be produced around 18 months later. For the new series ŠKODA built a modern production line in a 32,000-square-meter hall. In addition, a total of 2,500 square meters of office space and 3,000 square meters of social areas were created. In March 1996, the new paint shop was completed, where up to 1,800 bodies of model series ŠKODA FELICIA and ŠKODA OCTAVIA would be painted every day.

On 3 September 1996, former President of the Czech Republic Václav Havel inaugurated the new plant and also officially gave the go-ahead for the series production of the ŠKODA OCTAVIA. “The plant is beautiful, modern, really pretty. It would be great if all factories looked like this.” – Havel’s words of praise at the opening ceremony.

The development of the completely new OCTAVIA model series began in 1992, approximately one year after the traditional Czech brand joined the Volkswagen Group. The ŠKODA OCTAVIA was based on a Group platform which was completely new at the time. The robust body structure, which had been developed using the latest CAD (Computer Aided Design) technology, provided exemplary active and passive safety in combination with front airbags for driver and passenger. In addition, this was the first time that ŠKODA had offered the then new side airbags for the OCTAVIA.

With the clever liftback solution, the new compact featured an especially practical highlight: Thanks to the large tailgate of the hatchback model, customers benefited from excellent access to the 528-litre boot, which could be extended to as much as 1,328 litres by folding the rear seats down.

In 1996 – the first sales year – ŠKODA OCTAVIA customers could choose from two four-cylinder petrol engines or a turbodiesel drivetrain. In May 1998, the ŠKODA OCTAVIA COMBI extended the model range; from 1999 the estate version was also available with all-wheel drive. The last vehicle from the first generation rolled off the production line in November 2010. Between September 1996 and November 2010 around 970,000 saloons and more than 470,000 estates were delivered.

The second-generation ŠKODA OCTAVIA seamlessly continued the success story of its predecessor: Between 2004 and 2013, 1.6 million customers opted for the saloon, 900,000 buyers chose the ŠKODA OCTAVIA estate. The third generation of the ŠKODA OCTAVIA has been in production since November 2012. Today the bestseller is considered the heart of the brand and is extremely popular both as a family car and as a company vehicle.

Since the start of production of the first generation on September 3, 1996, more than five million ŠKODA OCTAVIAs have left the production halls. In addition to the main plant in Mladá Boleslav the compact is also manufactured at the ŠKODA plants in China, India, Russia and Kazakhstan.