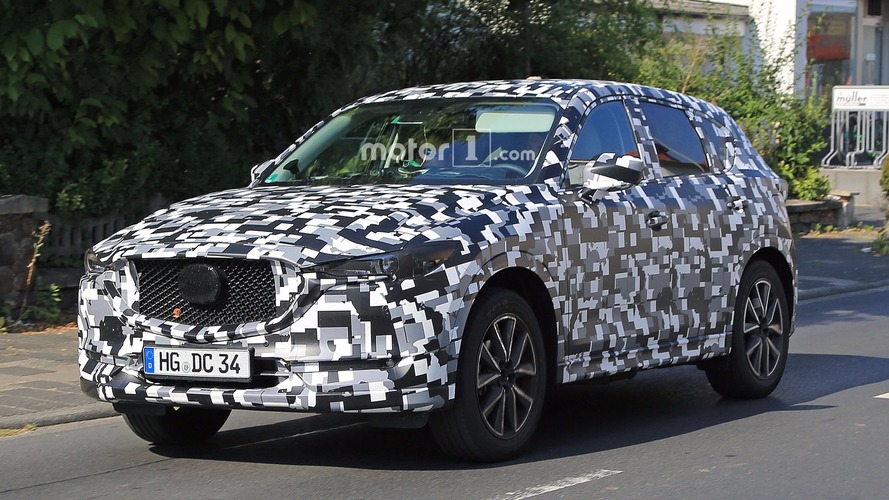 The updated CX-5 appears to have sharper looks, and it might boast a nicer interior, too.

Recent spy shots showed the refreshed Mazda CX-5 at a gas station in the United States, and now another photographer has caught the updated crossover testing in Germany. After a recent update for the 2016 model year, Mazda is clearly working hard to keep the popular CUV fresh in very crowded segment.

Mazda still entirely covers the CX-5 in camouflage, but there are still obvious changes at the front and rear. The grille on this one features a mesh covering rather than the current horizontal bars, and there's a thicker frame around the outside of it. The new lower fascia looks simpler because there are no intakes at each corner, or the camo hides them quite well. The designers also fit even narrower headlights that give the crossover a very aggressive face. At the rear, the taillights have sharper edges and a more tapered shape. The bumper gets matching reflectors that a more pointy what the CX-5 has now.

We haven’t seen the refreshed CX-5’s interior yet, but Mazda reportedly wants to take the brand upmarket. The current CX-9 likely shows what to expect because the latest model offers customers higher quality materials, like Nappa leather and Japanese Rosewood. To keep up with innovations in the rest of the CUV segment, expect updates to the driver safety assistance technology, too.

The CX-5's powertrain range likely won’t change much for this refresh. The current model is available in the United States with a 2.0- and 2.5-liter four-cylinder and a choice of front- or all-wheel drive. Some of the model’s updates might cut weight slightly, which could allow for small fuel economy improvements, but don’t expect anything revolutionary.

We expect Mazda to introduce the sharper looks and improved interior on the CX-5 for the 2018 model year. If the company hits that timeframe, the official debut would likely happen next year.