The plug-in hybrid shows that safety can come with efficiency.

The 2017 Chevrolet Volt scored a Top Safety Pick+ award for its crash performance from the Insurance Institute for Highway Safety. Chevy introduced the second-generation Volt for the 2016 model year, but the IIHS just tested it for the first time as part of an evaluation of several electric vehicles. The agency will release the rest of the results soon.

The 2017 Volt earned the IIHS’ top Good score in the small-overlap front crash test, whereas the previous generation had an Acceptable rating. Sensors showed a low risk of injury to the legs and feet. The agency's only concern was “the dummy's head contacted the frontal airbag but slid partway off the left side, allowing the head to move toward the gap in coverage between the frontal and side curtain airbags.” 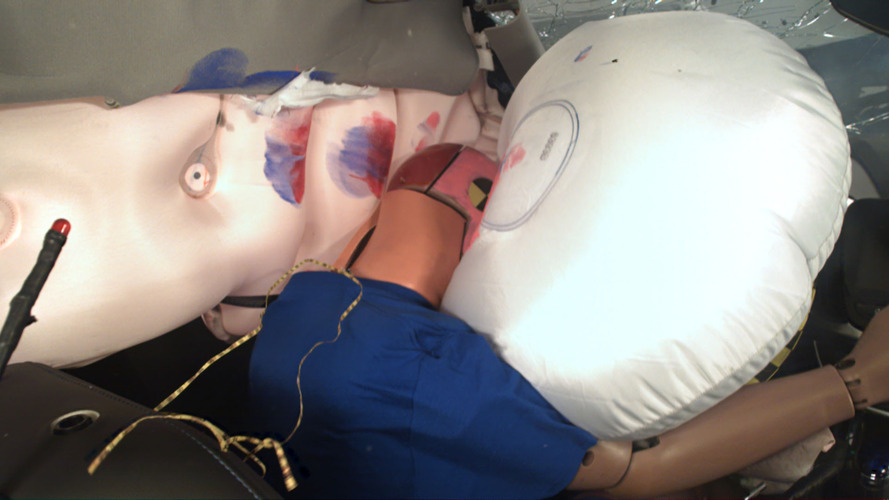 Earning the TSP+ rating is a little harder for the 2017 model year because there’s a new headlight test where vehicles must score an Acceptable or Good rating. IIHS engineers check how far the light reaches when traveling straight, making sharp turns, and during gradual cornering. They also take into account glare for oncoming drivers. The Volt’s stock units are Acceptable but improve to Good with the optional high beam assist, which automatically activates the low beams when another vehicle approaches.

The latest Volt looks more like a conventional sedan than its futuristic predecessor, and there are major technology improvements underneath the skin. The plug-in hybrid can now travel 53 miles (85.3 kilometers) on electric power. With the internal combustion engine keeping the 18.4 kilowatt-hour battery charged, the model has a maximum range of 420 miles (676 km).

The 2017 Chevrolet Volt qualifies for TOP SAFETY PICK+, the highest award from the Insurance Institute for Highway Safety.

The Volt, a plug-in gasoline/electric hybrid that can travel 53 miles without gas on one charge, was redesigned for the 2016 model year. The 2016 model wasn't tested, but the Institute evaluated the 2017 model as part of a testing program of electric vehicles. Results for the other vehicles will be released at a later date.

The Volt earns across-the-board good ratings for crashworthiness. Its performance in the small overlap front test was an improvement over that of the previous generation of Volt, which earned an acceptable rating. The new version had less intrusion into the occupant space.

When equipped with the low-speed system only, the car avoided a collision at 12 mph, and its impact speed was reduced by 5 mph in the 25 mph test. The low-speed system also gets credit for the warning function and earns an advanced rating.

To qualify for the 2016 TOP SAFETY PICK+ award, a vehicle must earn good ratings in the small overlap front, moderate overlap front, side, roof strength and head restraint tests and must have an available front crash prevention system that earns an advanced or superior rating.

For 2017, vehicles also will need good or acceptable headlights in order to qualify for the award. The Volt's standard headlights earn an acceptable rating. When equipped with optional high beam assist, which automatically switches between high beams and low beams based on the presence of other vehicles, the headlight rating improves to good.