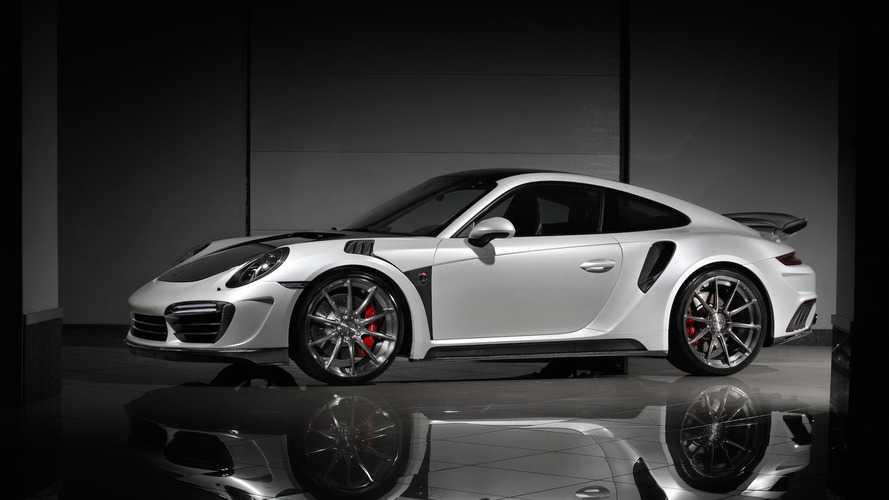 If you’re looking for a more powerful GT3 RS look-alike, call the crew at TopCar.

Making its world debut at the Moscow International Motor Show in Russia, tuning shop TopCar introduced its most aggressive Porsche project to date. The 911 (991) Stinger GTR Gen.2 takes the standard Porsche 911 and turns it up a notch... or three.

If you think it looks like the 911 GT3 RS, that’s the point. In order to duplicate that GT3 RS feel - but with a unique twist all its own - TopCar added a barrage of new body panels. The front and rear bumpers were replaced, as were the side skirts. Additions of new carbon elements on the doors, the inclusion of a carbon fiber hood, and the RS-styled carbon fiber ducts finish off the package. And let's not forget about the subtle carbon fiber rear wing.

If it seems like a lot of work went into this project, it did. TopCar says it was one of its “most complicated projects” to date. With the inclusion of its now signature “GTR” moniker on its most sought after products, the company says that the hard work was necessary to create an iconic look.

But it’s not all show and no go, mind you. Under the hood is up to 750 horsepower (559 kilowatts), an increase from the stock 580 horsepower (432 kilowatts) found on the Turbo S. That includes a new exhaust and braking system to accent that newfound power. The project is topped of with a set of ultra-light ADV.1 wheels, and a healthy amount of TopCar badging throughout.

The body kit, which is currently available to Porsche 911 owners, made its official debut just a few weeks ago, and marks the first by TopCar for the current generation. Though the company doesn’t list a price on its website, if you’re interested in this GT3 RS look-alike from the shop, go ahead and give them a call.

Gemballa Avalanche 4x4 based on the Porsche 911

We are pleased to present you the next generation of the most complicated projects - an aerodynamic body kit for the Porsche 991 Turbo / S, which was named Stinger GTR Gen.2. Traditionally, in all our projects, which have the prefix GTR, meant the hardest job with the car body: the replacement of most of the body panels and splice the power structures of a car with carbon fiber body kit elements.

Amount of works is impressive: the replacement of the front and rear bumpers, front fenders and side skirts, new carbon elements on the doors, expansion and splicing the rear fenders, replacement of the hood and installation of the new aerodynamic wing. The front bumper has a new aggressive aerodynamic profile with stabilizers in the middle and side air ducts, the lower rubber skirt moved from factory bumper and fully retains its functionality.

An important nuance - each element of the kit Stinger GTR gen.2 made of carbon fiber by vacuum forming which among other things significantly reduces the weight of the vehicle! That's not all.

TOPCAR recommends to equip Porsche 991 Stinger GTR gen.2 with ultra-light ADV.1 wheels, which will improve the quality of driving. In each case, the car interior is finished individually to the owner requirements. Our designers are ready to offer the most daring and exquisite design projects, which may be limited only by the budget.
Mechanical front improvements as wide: TOPCAR engineers can install a more advanced brake system, exhaust system, as well as increase the engine power to 750 hp.

Each part of the Porsche 991 Stinger GTR gen.2 is unique, as individually created to satisfy the owner. TOPCAR ensures flawless execution of all the work.