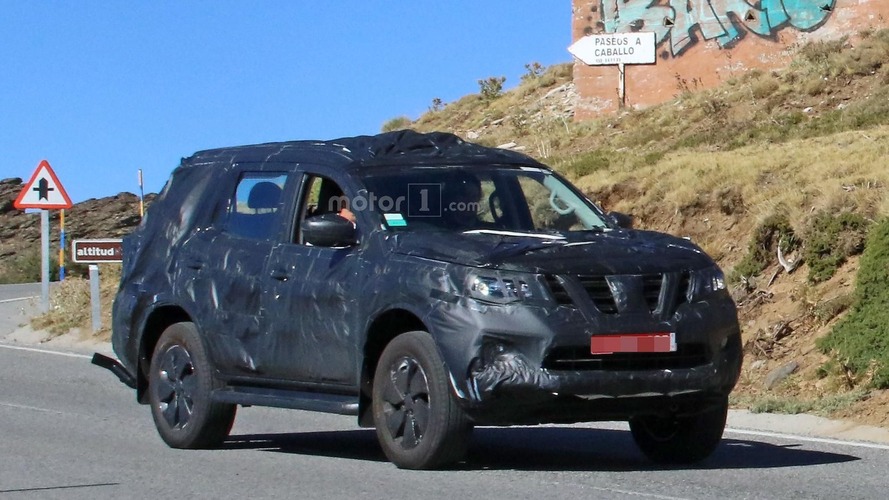 A right-hand-drive prototype of what appears to be a Nissan Navara-based SUV has been captured on camera by our spy photographers stationed in Spain. Unlike the previous test mule which basically had the front half of the Navara glued to the rear half of the old Pathfinder, the new test vehicle seems to carry the production body.

The front end is home to a prominent V-Motion grille slightly different than the one on the Navara NP300, while the headlights appear to be slender, although it might be because of the extensive amount of camouflage. Moving at the back of the vehicle, there are new taillights along with an erect exhaust which might be a sign that Nissan was testing a new or updated engine that will be offered on its forthcoming body-on-frame SUV. That being said, it would make sense for the engine lineup to a lot in common with the one offered on the Navara (pictured below).

It’s unclear at this point whether Nissan will sell the Navara-based SUV with an optional seven-seat layout or it will be strictly a five-seater. Regardless of how it may be, the cabin will likely be largely carried over from its pickup truck counterpart with only a few changes here and there to make it more appropriate for an SUV. The name remains a mystery at the moment of writing, although some are saying Nissan might decide to resurrect the “Xterra” moniker.

Taking into account the prototype had the production body, or at least we think it did, it means an official reveal of the rugged SUV with proper 4x4 capabilities is likely to occur in 2017. Nissan hasn’t said a word about where it plans to sell the new arrival, but the company’s Australian managing director and CEO has admitted in an interview with CarAdvice it would make sense locally.