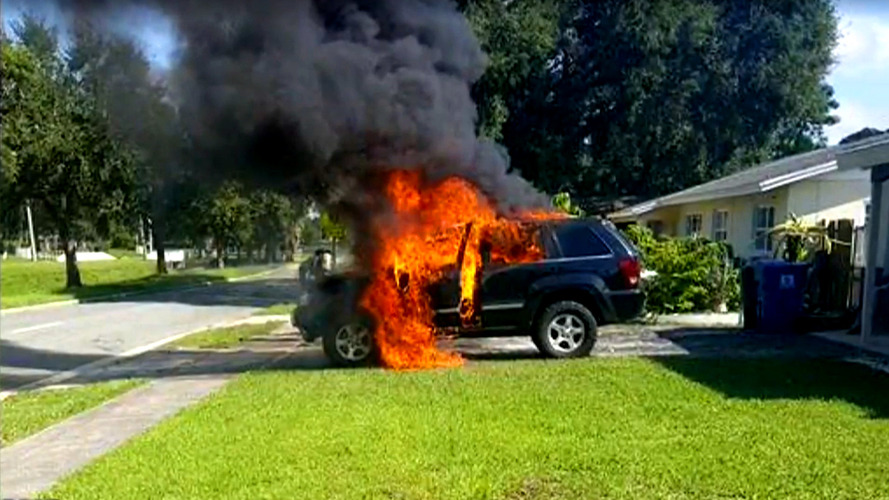 Speculators around the internet are wondering if getting a recalled Samsung Note 7 is the shortcut to a new car.

Earlier this month Samsung announced a voluntary recall for their brand new Note 7 smartphones. The reason? After a reported 35 instances of the Samsung smartphone catching fire while charging.

Not much of a surprise then, that a Florida man is now claiming his Jeep Grand Cherokee was turned extra crispy in a fiery explosion that was caused by his new Samsung smartphone that was left charging in the car.

According to Nathan Dornacher, in a post on Facebook, he and his wife Lydia had been to a garage sale Labour Day morning and picked up a desk for their daughter. While they were unloading the desk from the SUV, Nathan had left his brand new Note 7 charging in the centre console and the car running with the air conditioning on.

The family was inside the house when the phone had started a fire inside the family’s Jeep Grand Cherokee.

When Dornacher returned to the car a little later to retrieve his phone, the cabin was on fire. A fire, that allegedly was started by the Samsung Note 7 that was left charging. He had run into the house at this time to look for a fire extinguisher. While he searched, wife Lydia was calling the fire department.

Looking out the window moments later, the family was shocked to see Nathan’s pride and joy engulfed in flames with thick black smoke pouring out the windows. The family were even able to hear the airbags exploding as they watched the SUV burn.

Dornacher claims his Grand Cherokee wasn’t stock and had many upgrades including a bored out 6.4 litre HEMI motor. He’s glad that no one was hurt in the incident, but laments the loss of his beloved vehicle. And although having owned every generation of Samsung Note since the first, he says he’s unlikely to bring another into his home or car.

In a statement released to Fox 13 News a Samsung spokesperson had this to say:

"We are aware of the incident and we are working with Mr. Dornacher to investigate his case and ensure we do everything we can for him. Consumer safety is Samsung's highest priority. With regard to the Galaxy Note7, we are asking owners to take advantage of the Product Exchange Program announced on Friday of last week. The program offers Note7 owners the opportunity to exchange the phone for a new one. More details on the program can be found at here."

Florida’s St. Petersburgh Fire Rescue is investigating the incident to determine the cause and circumstances of this Jeep / Samsung blaze. No official word from that investigation has been released at this time.

In an update posted to Facebook yesterday, the Dornacher's say they've been in touch with Samsung who's said to be receptive and keeping open lines of communication with the family. The company is said to even be sending one of their own investigators out to review the incident.

If you own a Samsung Note 7, it goes without saying that you should get it exchanged immediately. Unless of course you really don’t like your car.