2018 Audi A5 coupe surprises with North American debut in Vancouver 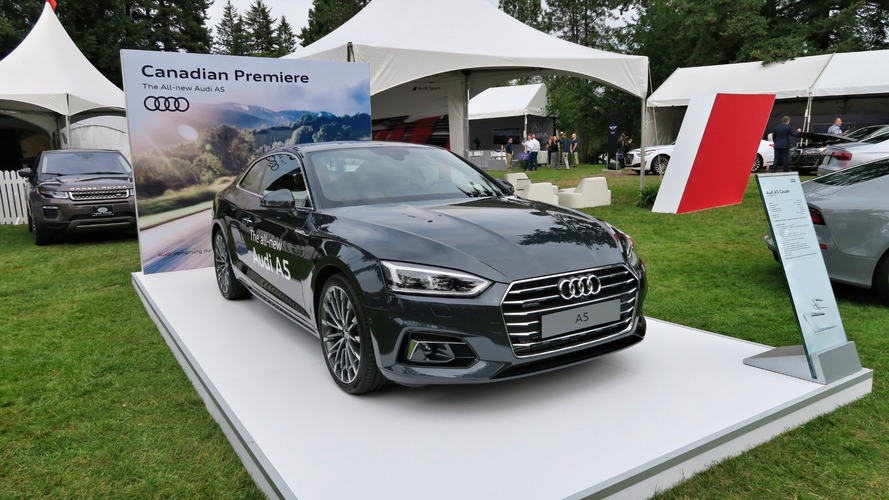 The all-new 2018 Audi A5 coupe makes a surprise North American debut at the 2016 Luxury & Supercar weekend in Vancouver.

The Luxury and Supercar Weekend held in Vancouver’s Van Dusen Botanical Gardens is regarded an exclusive party showcasing the crème de la crème of automobiles, fashion, art, food, and drink. One could even think of it as a proportionally smaller version of Quail, A Motorsports Gathering that is held in Carmel-By-The-Sea, California. But, of course, this show being for us in the True North Strong and Free.

Despite the population of California being roughly three-million more people than all of Canada combined, it was with great surprise and delight that Audi Canada chose this year’s Vancouver show to be the North American premiere of the 2018 Audi A5 coupe versus Monterey.

The crowds at Pebble Beach may have gotten an eyeful of the upcoming Audi R8 Spyder, but we were treated to this very first appearance of the forthcoming Audi A5 coupe on this continent.

Based on the same platform as the A4 sedan, the slick A5 coupe has been widely anticipated by Audi fans globally. Just as the Audi A4 underwent a weight-loss regimen, the A5 has followed suit and is now 132 pounds (60 kilograms) lighter than the car it will replace. All of this even though the 2018 Audi A5 has increased passenger space, a bigger trunk, and a longer wheelbase.

It should be noted that this 2018 Audi A5 previewed at the Luxury & Supercar Weekend was just that. A preview. Since actual production vehicles will not even go on sale in Europe until November 2016, this pre-production European model was equipped with trim packages, options, and colour schemes that may not be available for Canadian-spec models.

There is no moonroof for example. An option that you would be hard-pressed to find an A5 without in North America.

Despite this, it didn’t prevent us from speculating or drooling over the technology on-board the new A5. Major interior changes over the outgoing A5 model include Audi’s stunning new high resolution Virtual Cockpit system, which is certain to end up in Canadian cars. What is more of a question mark though is the availability of the advanced parking assist system, the massaging seats, as well as the various traffic jam and active lane assist systems.

Alas, it is also unlikely that we will see the eye-catching sequential front LED turn signals in Canada, for boring legal reasons.

For me, the most notable change, after seeing the 2018 Audi A5 in person, is how it now has a clear differentiation from the A4. While the differences may appear subtle in the photographs, the A5’s nose is clearly much more of an emotional design with its slightly higher headlights, lower and wider grille, and power bulge on the hood. These muscular cues add up to a more aggressive look that befits a sporty two-door coupe.

Prices of 2018 Audi A5 are still a few months from being announced, but one can probably expect the car to cost only slightly more than the outgoing model.

Gallery: 2018 Audi A5 unveiled in Vancouver