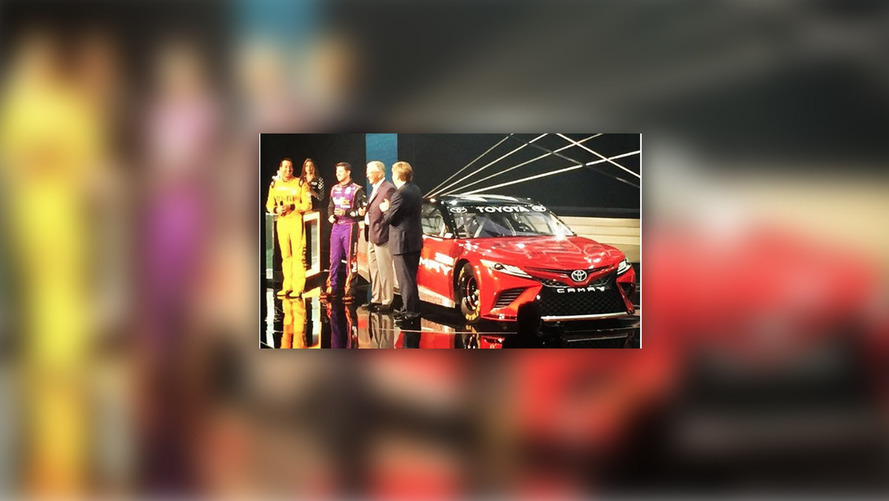 An updated Toyota Camry is on the way for the 2018 model year, and we now have a much better idea of what the front end might look like that to NASCAR. Someone snapped this photo above of the new racer during a presentation with the drivers.

The vehicle designs for NASCAR competition are usually a slight exaggeration in comparison to what’s on the road. We can still use the racer’s styling as a guide of what to expect, though. The design features aggressively arched, narrow headlights with L-shaped LEDs in them. The large lower grille is similar to the current shape, but the harder edges here evoke Lexus’ spindle appearance, too. Large, diagonal intakes flank it on each side.

There have been spy photos of the road-going 2018 Camry, but Toyota’s engineer’s have kept the sedan very well camouflaged. The outline of the grille looks similar on the test mule and racer. However, it’s hard to see whether the production version gets such rakish headlights.

Toyota reportedly plans to add a 2.0-liter turbocharged four-cylinder to the 2018 Camry’s engine range. One rumor even suggests the engine would replace the current 3.5-liter V6. The forced-induction mill is already in some Lexus models where it produces 235 horsepower in front-wheel drive vehicles, like the Camry. However, the figure would be a drop from the 268 hp from the sedan’s current six-cylinder.

Several big changes could mean a significant boost in the Camry’s fuel economy. For example, the model reportedly now uses the modular TGNA platform. Toyota also allegedly plans for the base 2.5-liter four-cylinder to switch to the more efficiency Atkinson combustion cycle. This would likely mean a reduction from the current 178 hp, but the compromise would be more miles per gallon. By connecting the engine to a CVT, mileage could increase even more. The hybrid would still be an option, too.

Crossovers have been gaining popularity over family sedans recently, but the Camry has remained a major part of Toyota’s volume in the United States. For the year through August, it's brand’s bestselling model with 266,746 deliveries. This photo suggests the upgrade could bring a more aggressive look, which might grab even more buyers.