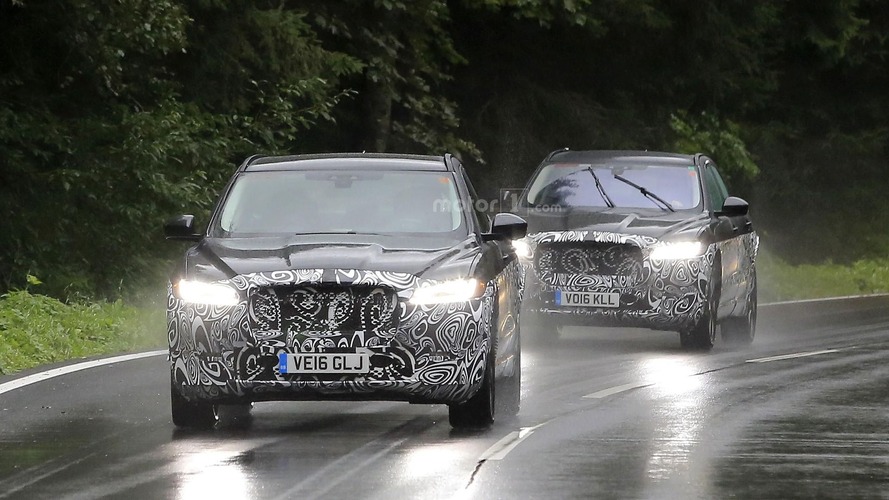 The test vehicles were using a modified F-Pace body.

A couple of rather odd Jaguar F-Pace test mules have been caught on camera on a rainy day undergoing testing and appeared to be slightly different than the donor cars. The rear overhang was clearly shorter than on the regular F-Pace and the vehicles also appeared to have a smaller greenhouse, while the roofline was more sloped towards the back.

These might be signs of the rumored E-Pace, an SUV believed to be in the works at JLR to slot underneath the F-Pace. However, one can never be too sure with these mules so early in the testing phase, so it could represent an entirely different model, perhaps even badged as a Range Rover. For what it's worth, Jaguar has ruled out those reports about a larger SUV for 2019 called “J-Pace”, so this probably isn’t it.

We have checked the license plates of both cars with the DVLA, but unfortunately details about the powertrain were not available. However, Autocar photographed a virtually identical test mule back in June and that one had a diesel-electric hybrid setup. It comes as a surprise to find out that JLR is working on such a setup since most automakers are focusing on gasoline-electric hybrids and pure EVs. Let’s not forget PSA has already announced plans to drop its diesel-electric HYbrid4 setup in the near future because it’s not popular enough to remain in production.

Some say the E-Pace (speculatively rendered above) will be launched as soon as 2017 with conventional engines and with a full-electric setup. As far as the plug-in hybrid version is concerned, it’s apparently not due before 2018 and it remains to be seen whether it will indeed couple a turbodiesel engine with an electric motor. It will be interesting to see how fuel economy will be improved over a gasoline-electric hybrid setup by adopting a turbodiesel, and also how many people will actually go for the rather unconventional powertrain.