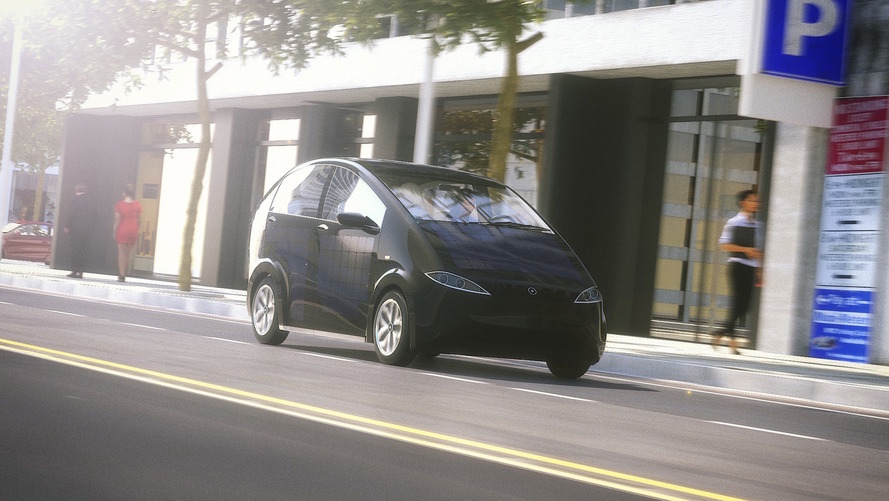 The quirky Sono Motors Sion is expected to be on the road by 2018.

Trying to start a car company from the ground up is no easy task, just ask Tesla. But as the old saying goes, “where there is a will, there is a way.” For Munich, Germany-based startup Sono Motors, that ‘way' was through crowdfunding.

No matter the trim, the Sion will use solar panels throughout; on the roof, doors, and rear. Those solar panels alone, the company says, will be ale to generate as many as 18 miles of driving range in a single day, making it “a self-charging electric car.”

Inside, the Sion will seat six comfortably. A large trunk space allows for storage and a ten-inch center display connects to your smartphone via Wi-Fi or Bluetooth. A trailer hitch is optional.

Deliveries are expected to begin in Europe and North America in 2018, and for those early investors, Sono is offering a range of incentives from a full-day test drive, to discounts on the car itself. Interested buyers can put down a €500 ($563) refundable deposit, or a €2,000 ($2,251) pre-order and get five percent off the standard MSRP.

Electro-mobility is currently experiencing a boom. Until today, however, no cost-effective electric car suitable for everyday use has been available on the market. The Munich Start-up SONO MOTORS now presents a family-friendly electric car called Sion on the crowdfunding platform Indiegogo. With a range of 250 km, a price of 16,000 € and the integration of solar cells in the body, the vehicle should be of particular interest to the middle class. Via this crowdfunding campaign, SONO MOTORS will be collecting the money necessary to reproduce the prototype of the Sion for crash tests and trial runs. Through a subsequent pre-sale in 2017, SONO MOTORS is hoping to gather enough financial support for serial production of Sion in cooperation with automotive manufacturers and suppliers. Press release Sion. An electric car for everyone. The five-door compact van is a purely electric car with a battery capacity of 30 kWh and fast-charge performance with up to 43 kW, so even long-distance and vacation trips pose no problem. However, the striking innovation is a unique self-charging system called viSono, which charges the Sion through solar cells. With a surface area of 7.5 m², these cells generate enough electricity to give the Sion an additional 30 free kilometres in one day. In short: A self-charging electric car. Bidirectional charging – the Sion can not only be charged with electricity, but can also provide electricity at any time. Thus, the Sion is a mobile power storage. Using a household plug, it is possible for current consumption by all common electronic devices with up to 2,000 watts. reSono A maintenance system called „reSono“ guarantees favourable maintenance costs due to inexpensive spare parts. At reSono, an instruction catalogue and a tutorial video will be provided, intended to guarantee that even an amateur can install spare parts into the vehicle without major automotive knowledge. But that does not mean customers have to repair the Sion by themselves. The royalty-free disclosure of the workshop manual is meant to enable brand independent car repair shops all over the world to repair the Sion. This results in a very well-developed service network from the start which guarantees you a cost-effective repair of the vehicle. In short: The customer can simply go to the repair shop around the corner with the Sion. Visit Crowdfunding Further questions and details Sion. An electric car for everyone. Pricing There are two variations of the Sion with different ranges. • „Extender“ 250km range (30kWh) Target Price: 16.000 € • „Urban“ 120km range (14,4KWh) Target Price: 12.000 € Other features: • Practicality - six seats, each able to be individually folded down • A large trunk. Optional trailer coupling. • Display - ten inch display in the central console allows you to connect your smart phone via Wi-Fi or Bluetooth and have all your apps, music and contacts at hand right away. • breSono - The breSono system is a unique moss integrated into the dashboard, which acts as a natural air filter