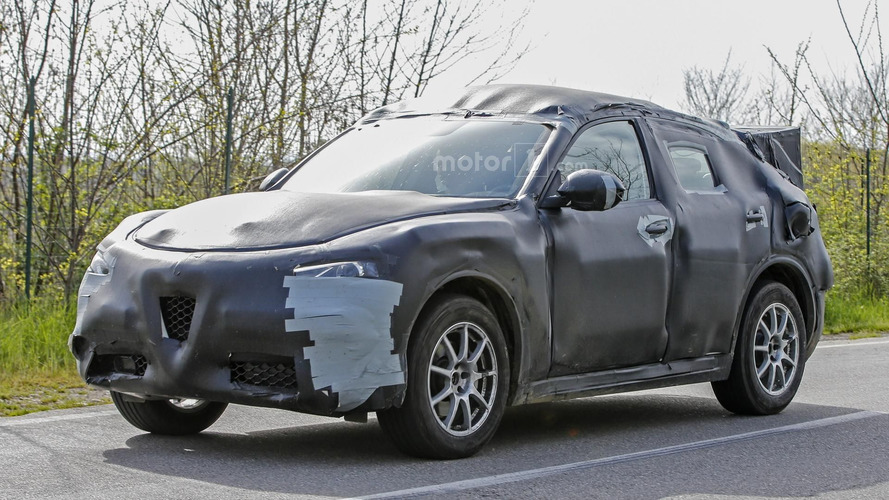 After Maserati, another Italian marque is ready to jump on the crossover/SUV bandwagon.

It was 13 years ago when Alfa Romeo expressed its intentions regarding a crossover with the Kamal concept introduced at the 2003 Geneva Motor Show. That one never morphed into a production model, but now the wait for Alfa’s first high-riding vehicle is almost over as the FCA-owned company has announced plans to show the Stelvio in November at the Los Angeles Auto Show.

Named after a gorgeous mountain pass in northern Italy, the Stelvio can be best described as a crossover version of the Giulia from where it will inherit most of the hardware. Alfa Romeo has been very generous in terms of the amount of camouflage on its prototypes, so the design has remained hidden under the thick disguise.

That being said, our hunch is that it will look more or less like a Giulia on stilts with some changes here and there to make it more rugged as one would expect from a crossover. In an interview with Car & Driver last November, head of the Alfa Romeo brand in North America, Reid Bigland, said it’s going to have a ‘really gorgeous Italian design and style to set it apart.’

It will be slightly larger than the BMW X3 and we know from Alfa that it’s going to offer ‘peerless performance’ as far as the 0-60 mph sprint and Nürburgring times are concerned. It might mean the Stelvio will be quicker on the 'Ring than both the Porsche Cayenne Turbo S and Range Rover Sport SVR.

A rear-wheel-drive layout is going to be standard, but some of the engines will be offered with an all-wheel-drive layout. The engines will be borrowed from the Giulia, including the biturbo 2.9-liter V6 unit which will power the range-topping Stelvio Quadrifoglio where it will likely have the same 505 hp & 443 lb-ft output. That being said, it’s unclear at this point whether the spicy version will be available from day one, or Alfa will decide to wait a bit before showing us the crown jewel of the family.

The first-ever Alfa Romeo SUV will go official in November at the Los Angeles Motor Show and will likely hit dealerships in Europe early next year.